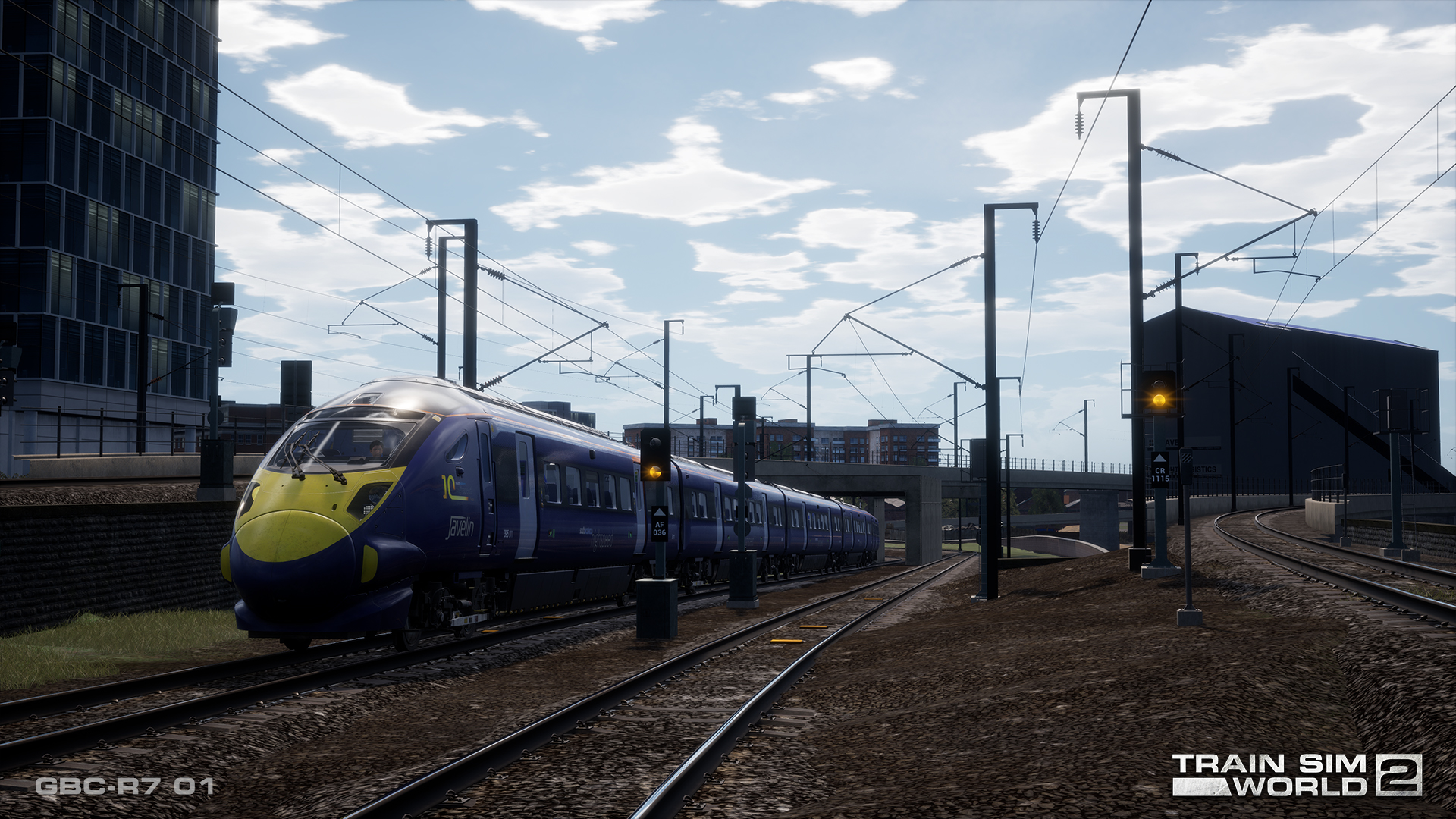 We chat to the development team about building the signalling system on the upcoming Southeastern High Speed...
Next week classic mainline and thrilling high-speed come to Train Sim World 2 with the new UK route, Southeastern High Speed. We talk to the designers on the Signalling Team about how the real-world signalling system was recreated with over 650 signals to support the BR Class 395 and 375/9.

What is different/unique about this signalling system?

At the outset unlike most routes this has two completely different systems, classic UK multi aspect colour light as most people are familiar with from most UK routes. It also has the French TVM430 cab signalling.
This is a slightly different system but fundamentally the same as the LGV signalling as it has the numbers popping up in the cab. As you switch over at Ebbsfleet you will go from looking at colour light signals as you normally would in the UK to then following what the speed indicators inside the cab are telling you. The route feels like it’s in halves, half feels like a traditional UK route the other half feels a bit like LGV.

Does this mean our players who have experienced playing LGV will feel some similarities?

Yes absolutely, once you are familiar with the TVM signalling and how to use it on LGV (it’s quite straightforward you basically do what it tells you) that is the same system. It just has some slightly different numbers because the Javelins only go 225 km/h whereas the TGV do 320 km/h.
There are actually 4 different visual styles of signalling on the route. At St Pancras you have Fibre colour light, you have TVM flags on the high-speed line and then on the North Kent section you have the classic filament, the older style. And then there was a big east Kent project where there are now modern LED style signals.
Combined with changing between 3rd rail and overhead, and between MPH and KMH and a range of signalling visuals and systems it’s all change as you drive along this route.

How do you make the signalling system and what process have you gone through to create this?

There are 2 layers to recreating the system. The first bits we look at are what does the system do? What does a signal do? And what is the interface to the train? For example, does it have a red light, yellow light, flashing light? And then the second part we look at is the wider system, what do the cohesive system of signals do? How do you protect this junction with 5 or 6 signals for example.
Initially what we are really trying to do is understand how the system works, you have to treat signalling not as a light but as a system that is designed to create safe transit along this railway. Once you understand why the signals are the way they are, it becomes much easier to understand the technical implement in detail because you know what it’s trying to do.
The process for doing the signalling on the route can be broken down into four steps - research, implementation, testing/feedback, and polishing.
Our research gathers together as much information from as many sources about the route as possible, such as diagrams, pictures, videos and official documents where available. We talk to people, sometimes drivers who drive along the line or who have driven along the line and have used similar systems so we can gather as much information as possible. Not just what it looks like but the experience of being in it.
We will then take a type of Google Earth survey where we will try and identify every single signal from a top-down view. We will use all the other assets we’ve got too such as technical drawings or pictures and photographs. They will help us say “just after that junction there is a signal” and on Google earth we will be able to see a blurry dot, which tells us that blurry dot is probably the signal I am looking for.
It’s a lot of detective work finding these dots and turning them into a specific signal. With each of those dots we will then put a description together detailing exactly what type of signal we are looking at, this is done across the entire route, and it doesn’t just cover signals it also covers everything related to signalling which can include track side cabinets, ID boards and approach counters.
One of the largest parts of the signalling job is working out what those signals are and where they go, once you get to understand signalling you begin to get a feeling for where the gaps are and where the signals should be. It’s not quite as big as making the actual signalling system in the game but it’s not far off. If we didn’t do it this way, we would be required to make it up, which would essentially require us to do the job of a signalling engineer. Trying to work out how you would signal a route would be significantly more complicated and time consuming.

Map data: Google, Maxar Technologies
Now we have the research done it comes down to basic implementation. We go about this in 2 steps, the first step is to import that giant marker file that was created into the game so that we can see in the game where all of these markers are for all of the signals. Then what we do is put placeholder signals which look a bit like giant lollipops, that are track linked, and the objective here is to create a signal object that is track linked into the correct location and set that placeholder signal so it acts like an actual signal even though it doesn’t look like a real thing. It has all of the correct routes, properties, speed limits and whether it’s a shunt route or a main route, all the various technical data for the signaling routing set up are all done. 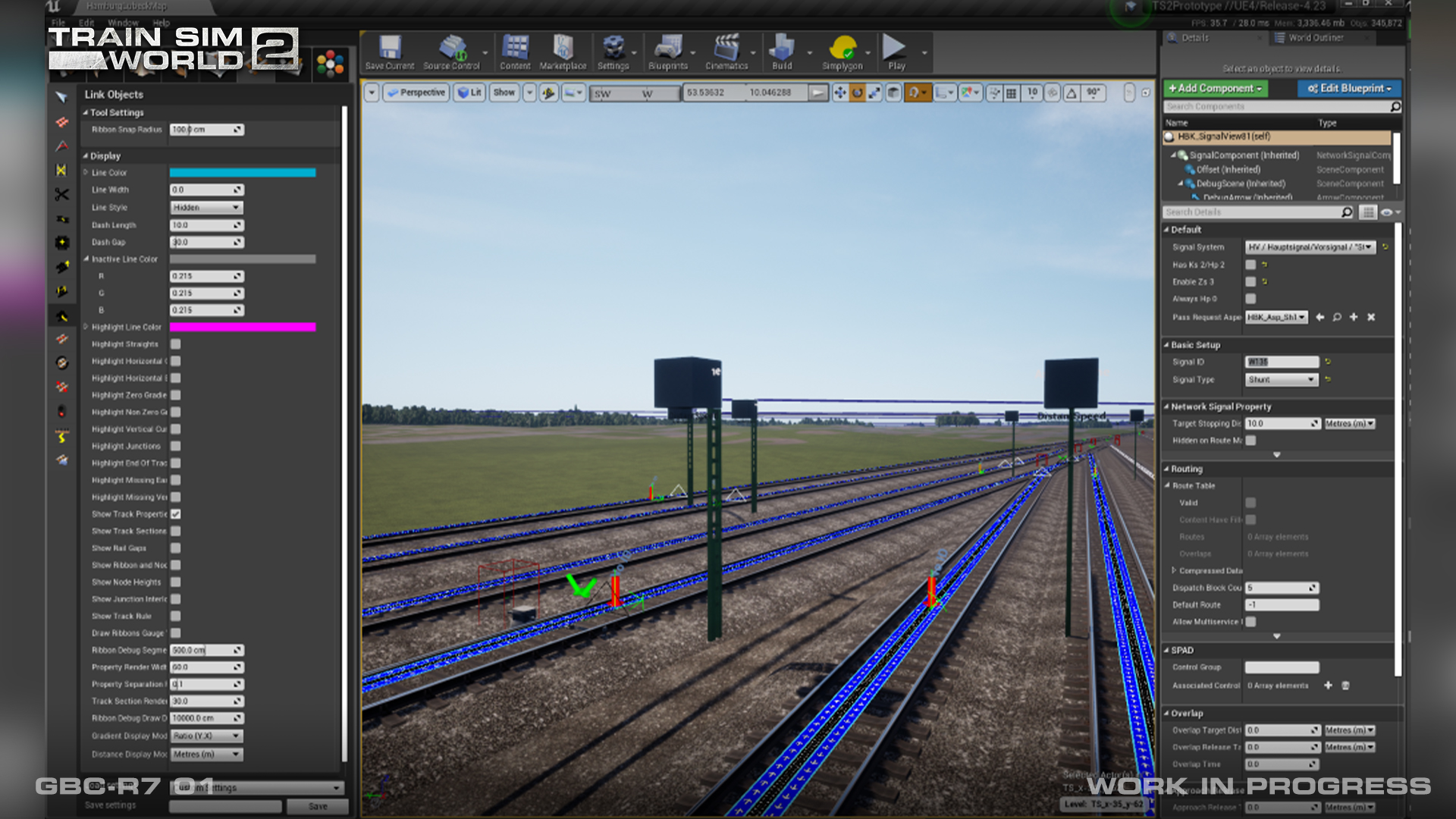 Once we’ve done that things become playable and the gameplay team are able to start making gameplay because the route now works, all of the signals look wrong but they do what they need them to do.
Our signaling team then need to focus on getting all of the visual set up done. What the team do is use a building block type parts and effectively they snap these things together.
Rather than having one asset which is a finished signal that gets placed, what the art team do is create a base, ladder post, 3 aspect head, 2 aspect head and so on. We can then combine these inside the editor by selecting the pieces we need and clipping them together.
Sometimes there can be up to 30 pieces clipped together, for example if we have a post that angles at 45° and then goes up we are able to change all these lengths within the editor without any need for the artists to get involved, what this means is the power is there to make the signals as unique as they need to be without requiring tons of art time and without any performance implications. 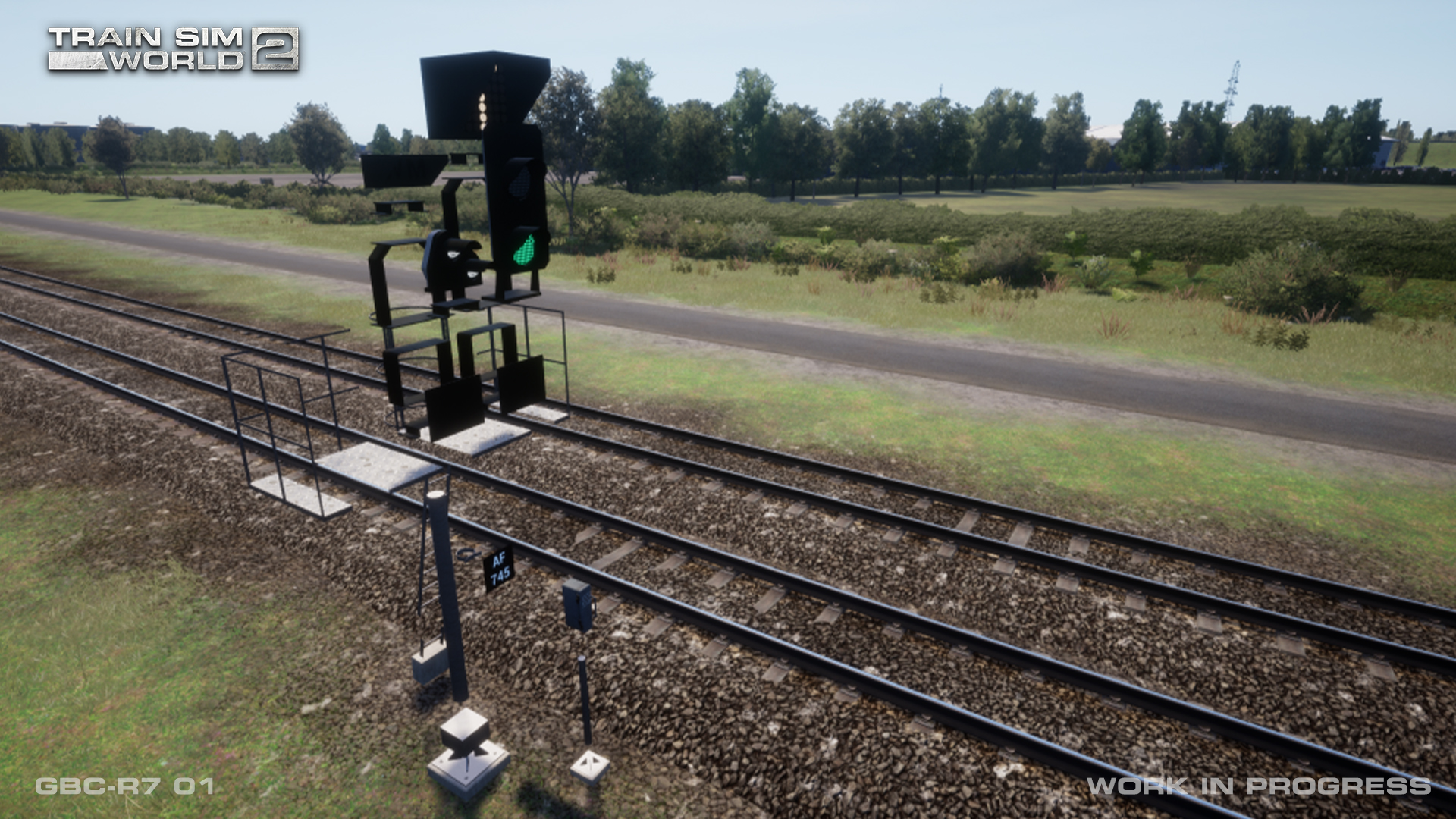 When the majority of the route has its signalling finished to a functional state and speed limits are applied, testing can begin both in house and with the external beta team. A lot of the people who help us with the technical information in the first part are there at the end of the process as well, and they give us tons of feedback about what we might have done right and what we could do better.
We go through a process of listening to that feedback and improving as much as we can.

Did you come across any challenges while creating this signalling system?

So TVM has had a lot of changes and improvements to some slightly unique characteristics for this line, but generally we’ve just been improving the TVM system after learning some lessons from LGV. The engineering team have spent a lot of time on that side of things.
The sheer wide range of assets required to properly re-create the variation of signalling along the route has certainly been one of the main challenges, along with ensuring the power and signalling changeovers all work correctly and interface with each other properly.

What's your favourite part about the signalling on the route?

We’ve worked with one of our Beta testers to create LED lens textures to represent the arrangement on the newer signals. So what you will find is when you see the newer LED signals if you look up to them you can see all the individual LEDs and we’ve tried to copy the patterns, we find that when we are driving the route they twinkle a bit differently, you can see it looks different to other filament lights, it adds to the realism we are trying to recreate.

We would also really like to thank all of the Beta testers and advisers who help us, we get lots of advice and guidance. They answer endless questions from us about how things work and we really appreciate the time and energy they take to help us, they consistently go above and beyond and it shows with what’s there. 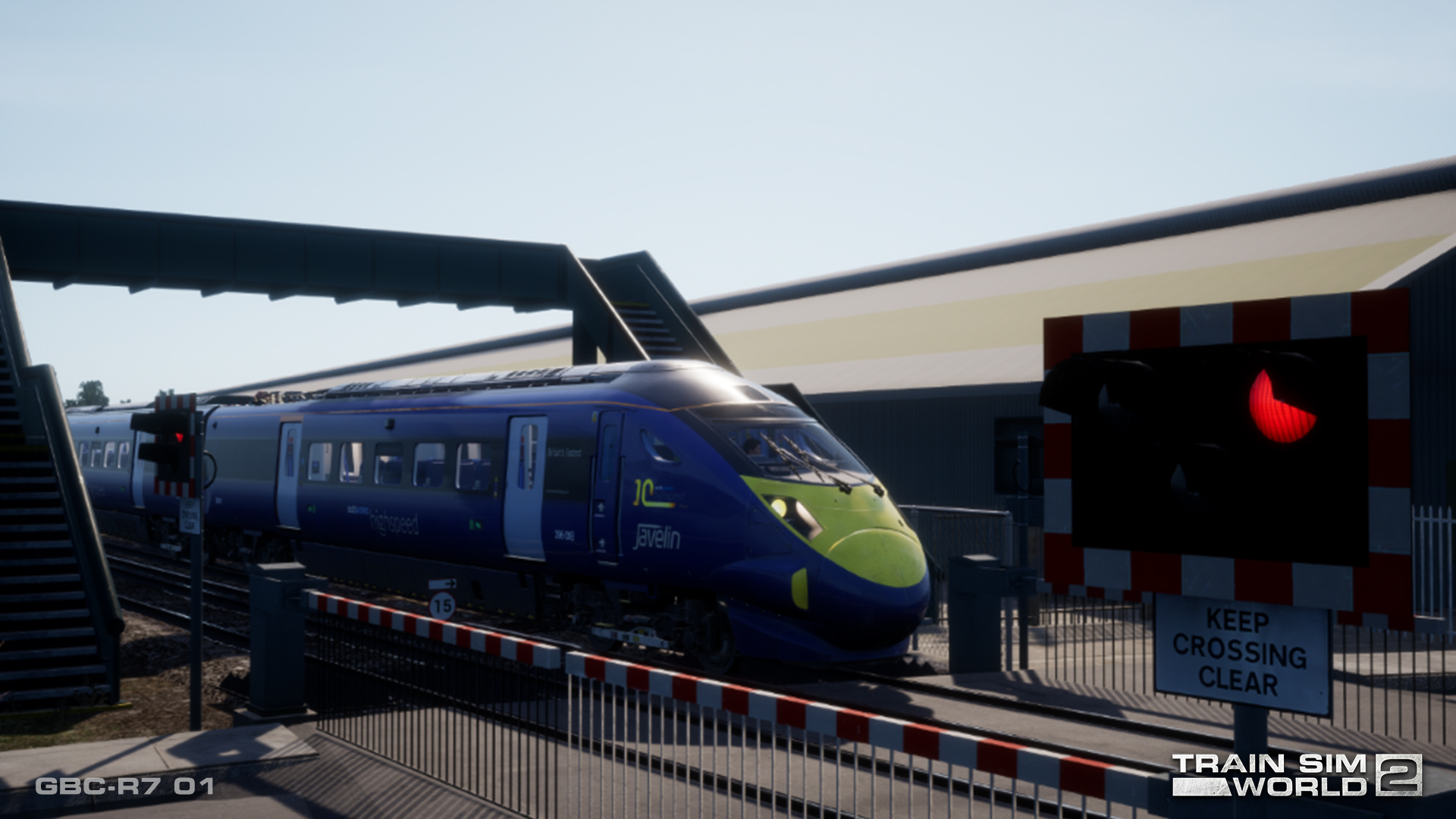