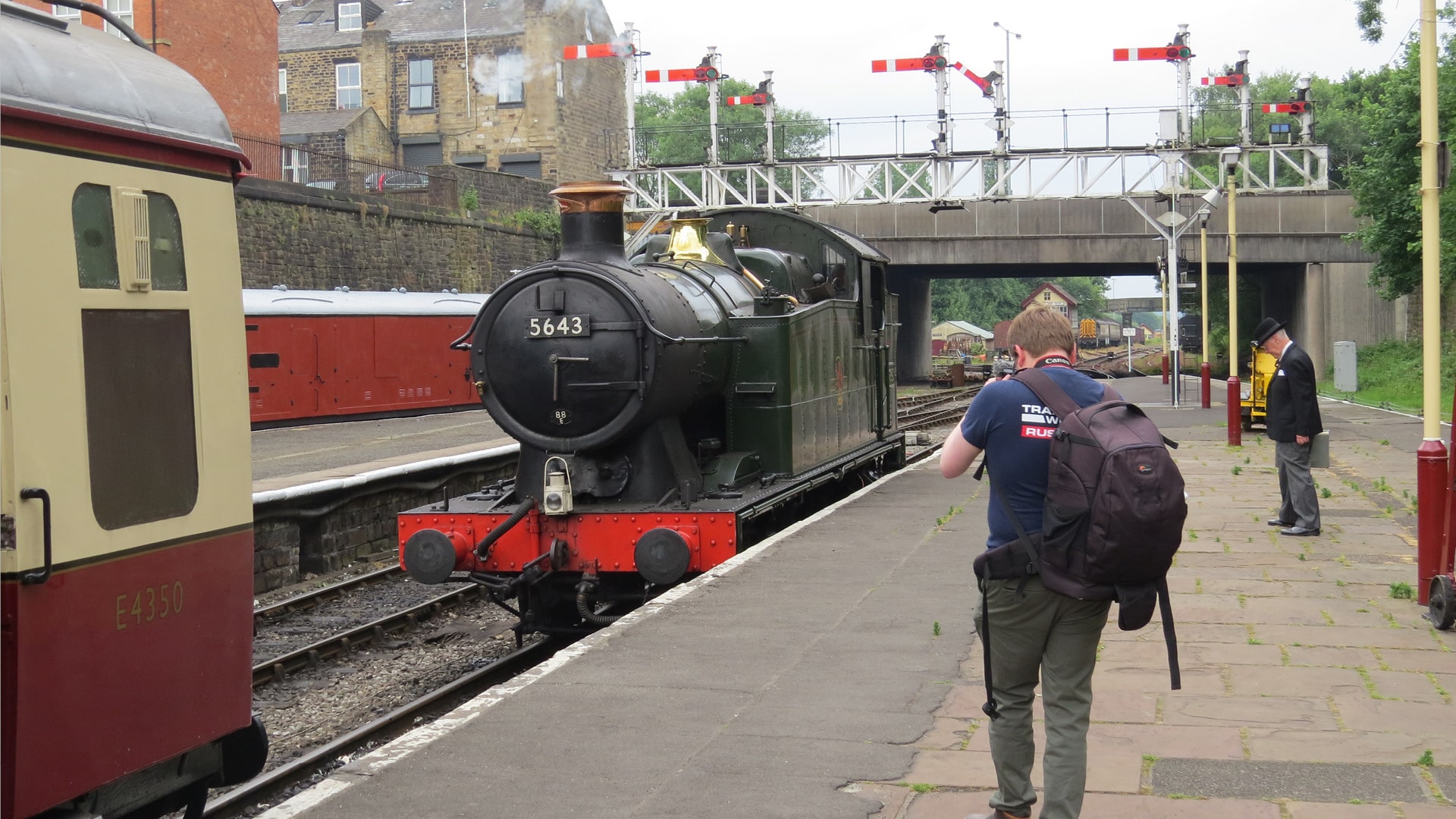 Last month the Railfan TV team and I visited the wonderful East Lancs Railway and Bury Transport Museum to film a piece for BBC North West about Spirit of Steam. Whilst we were there, we had a chance to explore all the railway and museum had to offer, as well as take all manner of pictures. Here's what happened!
My name is Chris, and I'm a railway enthusiast and Marketing Assistant on Train Sim World 2 - as a railway enthusiast, I get the opportunity to go 'on location' for events like this - it's certainly one of the perks of the job! Working alongside JD and Jamie from the Railfan TV we aimed to bring you a plethora of exciting content linked with our visit. I was on hand to document our day and give you a behind-the-scenes glimpse of our trip. 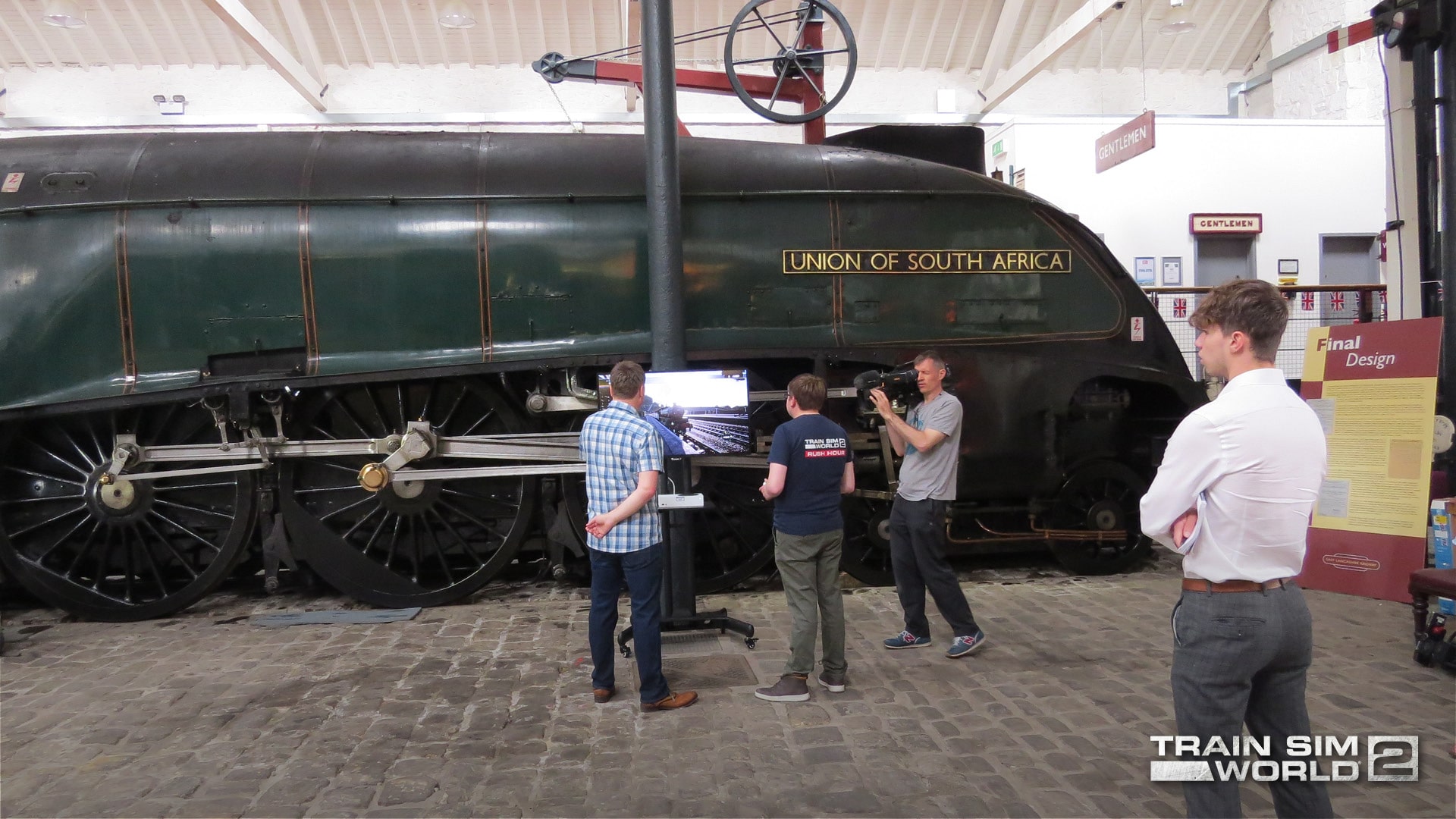 Kicking off the day at the Bury Transport Museum, we worked alongside Phil Cunliffe from the BBC to bring you a fantastic piece on Spirit of Steam, which was later broadcast on BBC North West News. You can find out more about this part of the trip, and watch Phil’s handiwork in last week's article HERE! 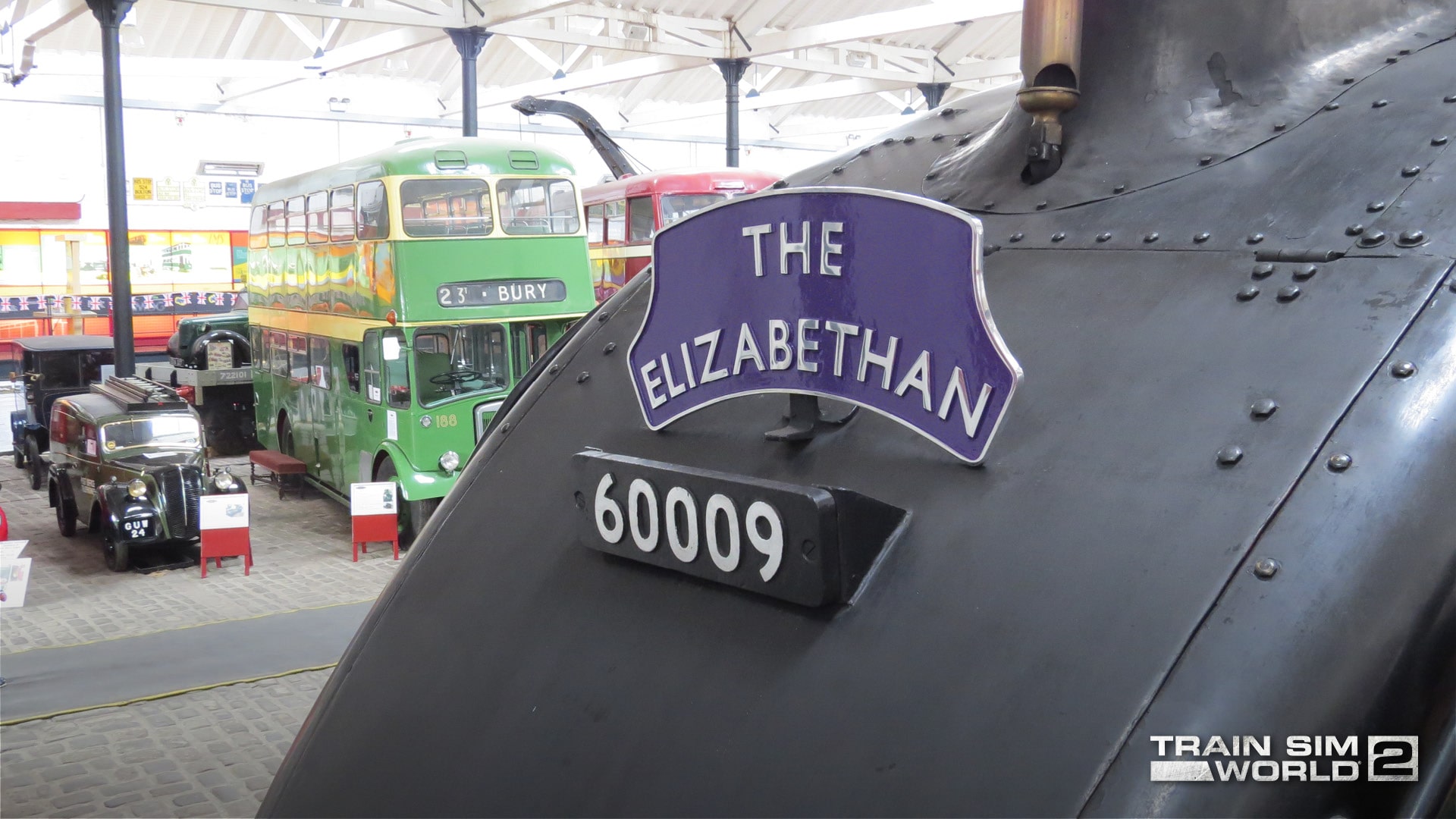 Once we had said our goodbyes and wrapped up with the BBC we had a bit of time to explore the museum itself. The Bury Transport Museum is an Aladdin’s cave of local and British transport history, with lots of interactive and educational activities, and a beautifully restored collection of vehicles and locomotives, there is plenty for everyone to see and do.
Jamie and I were particularly impressed by a superb model of a Lancashire and Yorkshire Railway Electric Motor Unit. Of course, we can't overlook the elephant in the room. By that, I am of course referring to the awesome LNER BR Class A4 60009 “Union of South Africa”. I was lucky enough to have seen this glorious locomotive performing rail tour duties in Scotland, but it was impossible to not be impressed by the sheer size of this 85-year-old loco, Jamie’s smile spoke a thousand words. 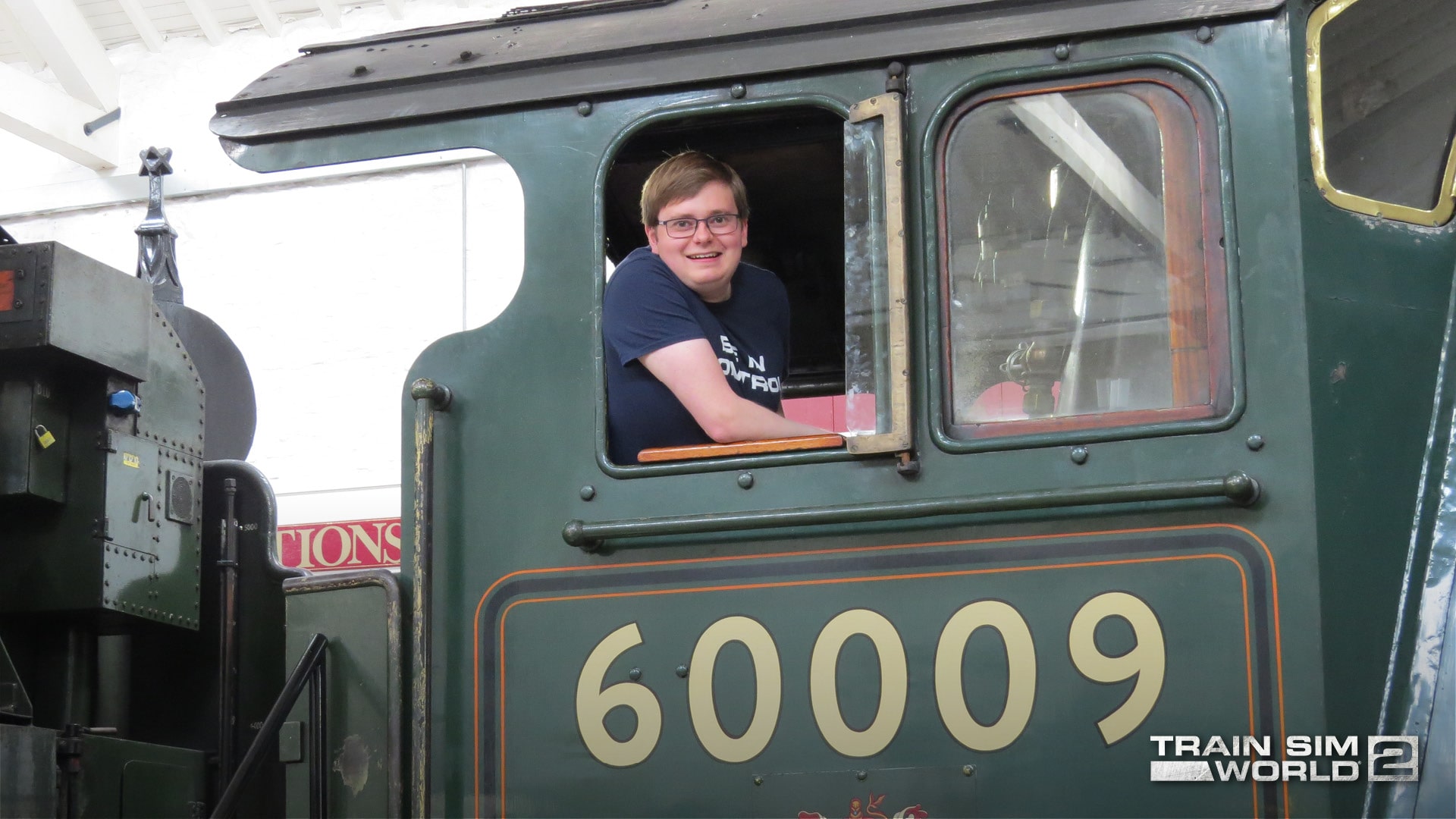 Heading off from the museum we moved on to the East Lancs Railway, situated directly across the road from the museum it was almost as fast as going from the Ffestiniog Railway to the Welsh Highland Railway. Mark Hill, the Railway’s Commercial Manager, had kindly invited us to join him at Bury Station. Walking up to the main entrance and into the ticket office was like stepping back in time -this wonderfully restored station was a snapshot of the glory days of British Railways in the NorthWest of England. 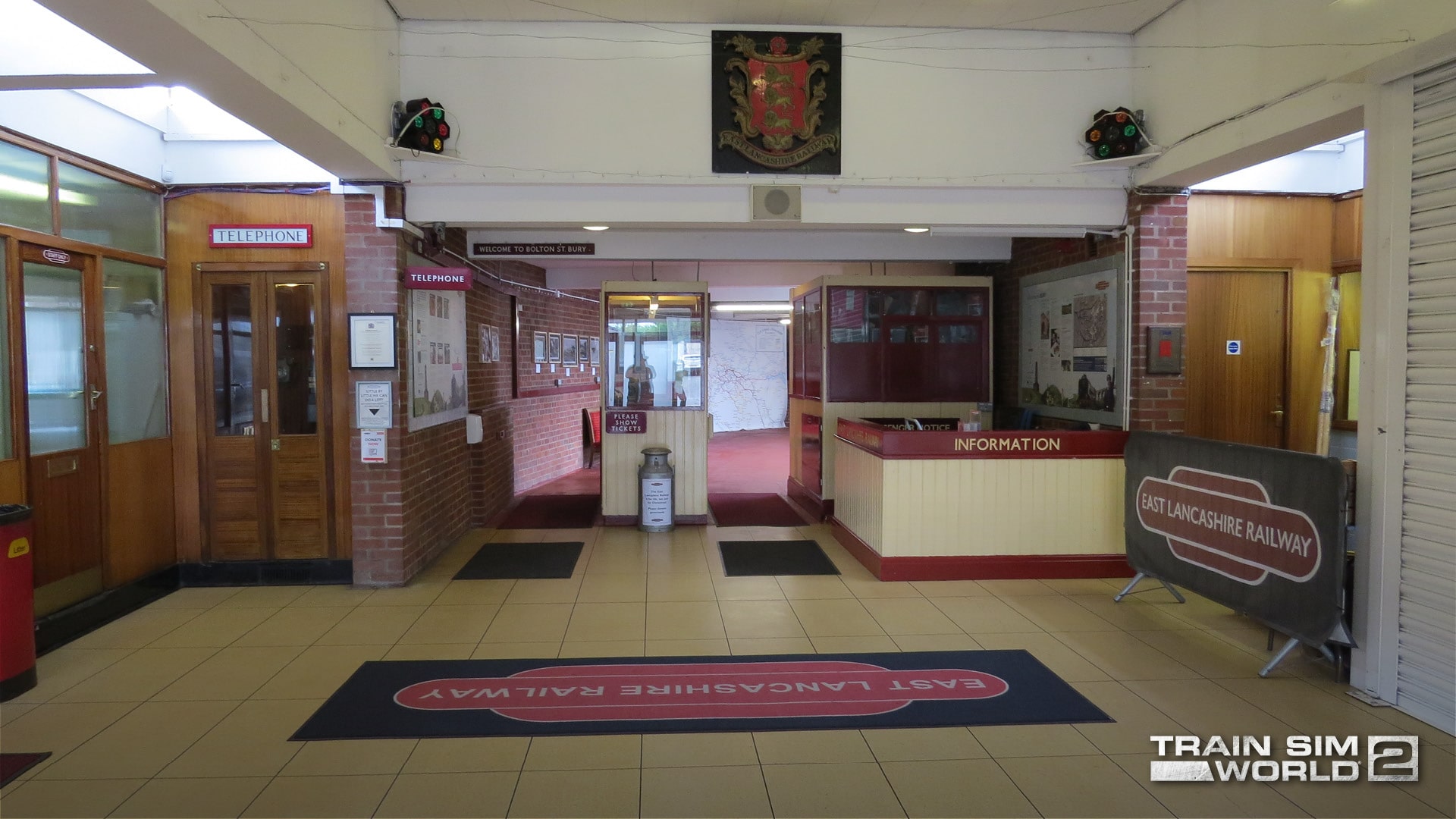 We headed down onto the platform, and it was clear that the railway staff and volunteers have done an incredible job on the station. It was like stepping into a different era, an incredibly impressive experience. Its style was completely different from the quaint, Pre-grouping, country stations that I’m used to seeing at preserved railways across the Southeast. As we were exploring the station, our eyes were immediately drawn to the well-timed arrival of SR BR Class West Country 34092 “City of Wells”. 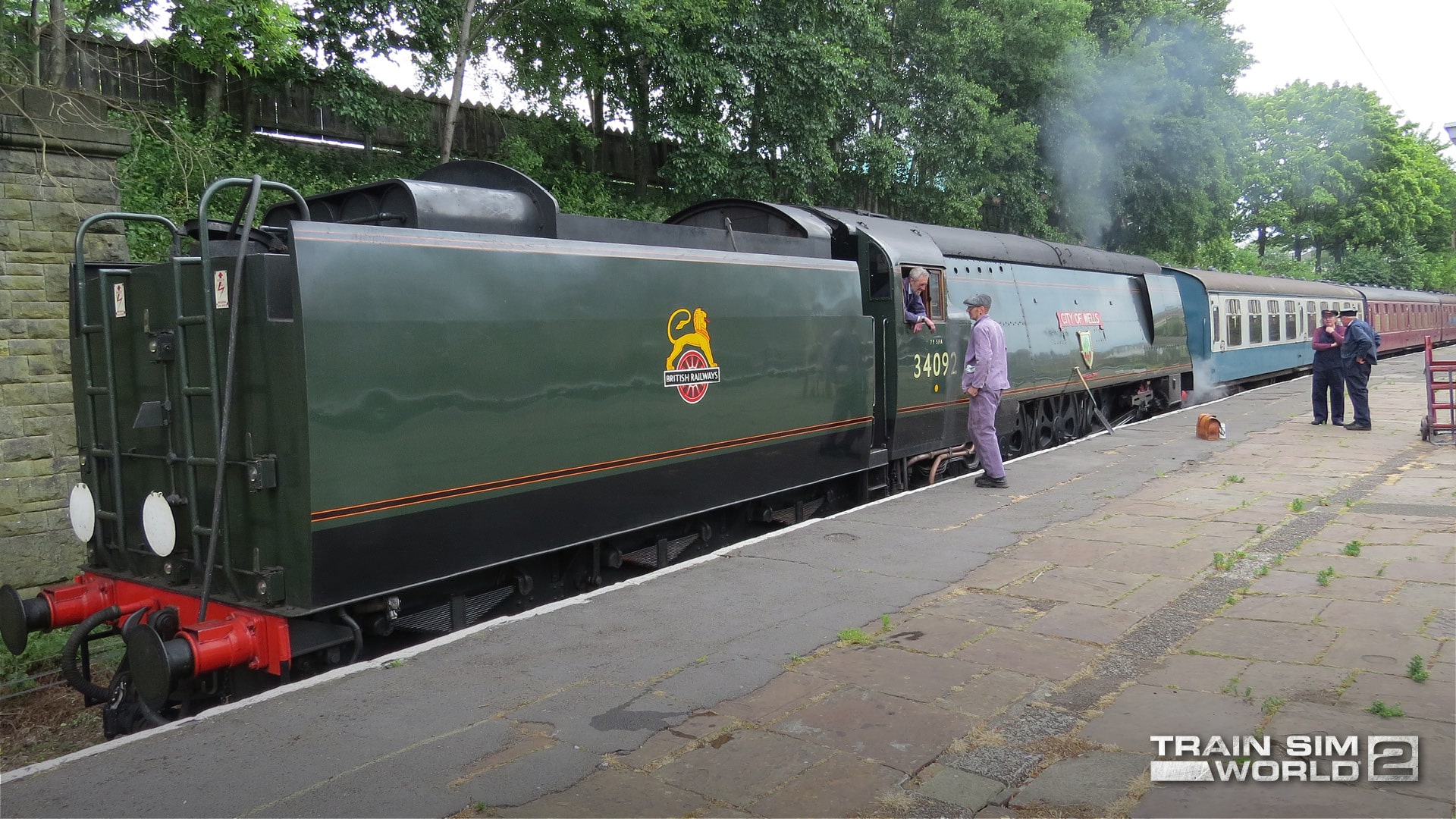 Bury Station has also recently undergone some renovation work and is home to a wonderfully updated platform-side bar and restaurant, this is clearly a popular destination for locals as it was busy the entire duration of our stay. If you are heading to the railway, I’d certainly recommend incorporating that into your visit. 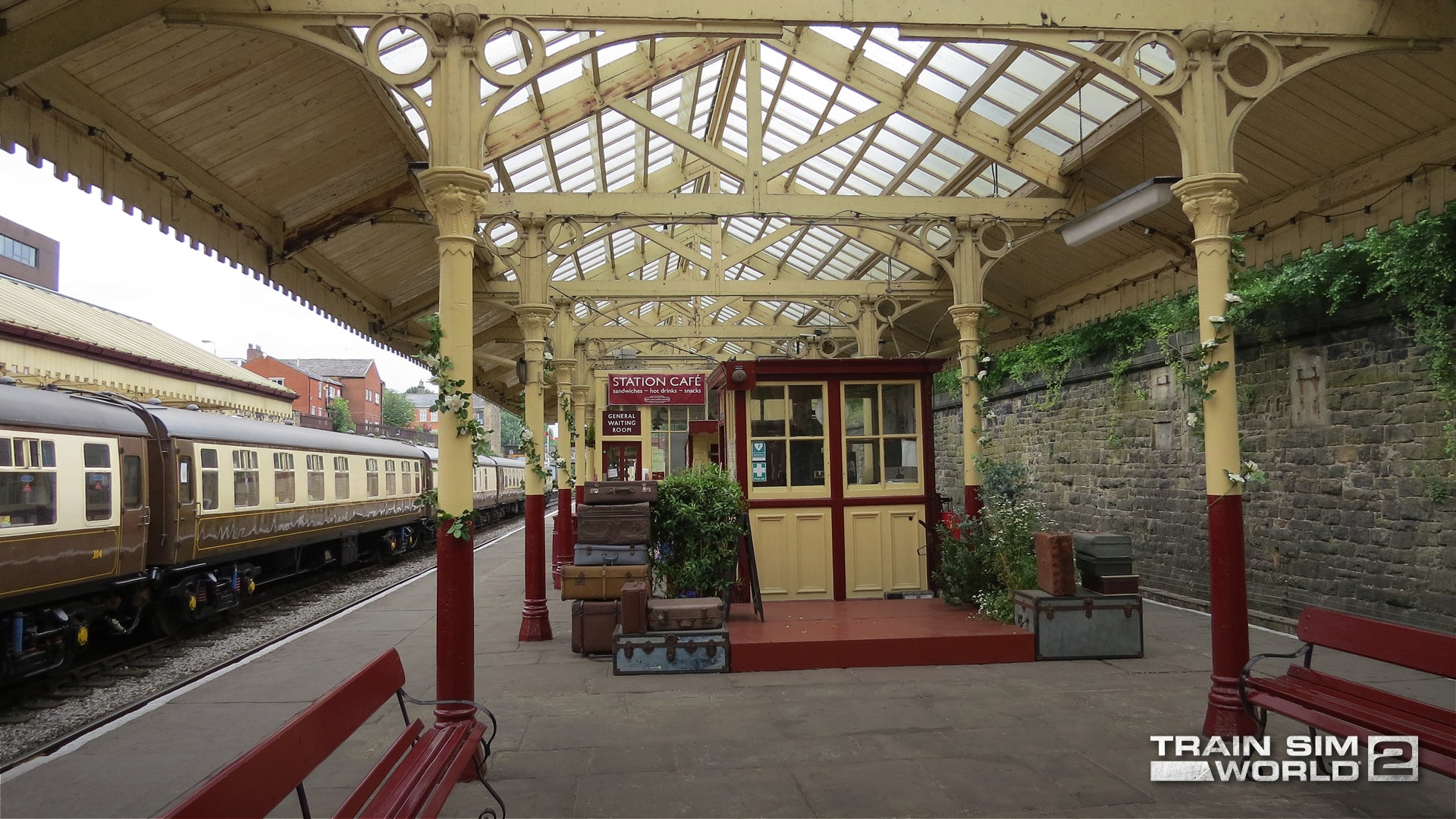 Once we had finished our lunch, Mark Joined JD and Jamie for a special live broadcast of Railfan TV. You can check it out here!, please excuse the noise “City of Wells” is making. They spoke about the Railway, the locomotive “City of Wells” which we had chosen as our backdrop for the occasion, and the railway's upcoming events throughout the summer season. It would be fair to say that the broadcast didn’t come without its challenges and minor technical issues, but once we had them resolved it went rather well. This was a learning curve for us all and we hope to bring you more content like it in the future. 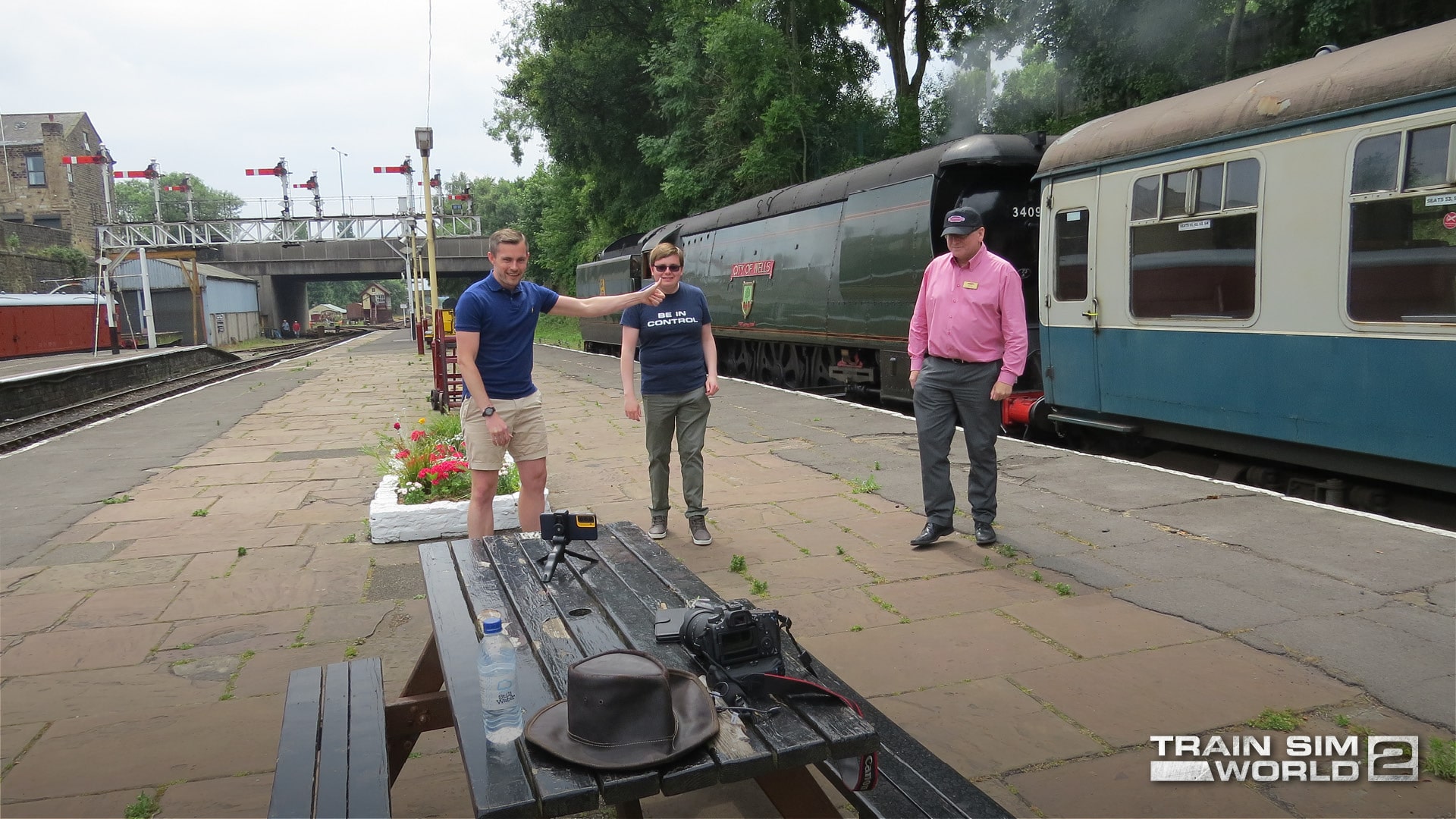 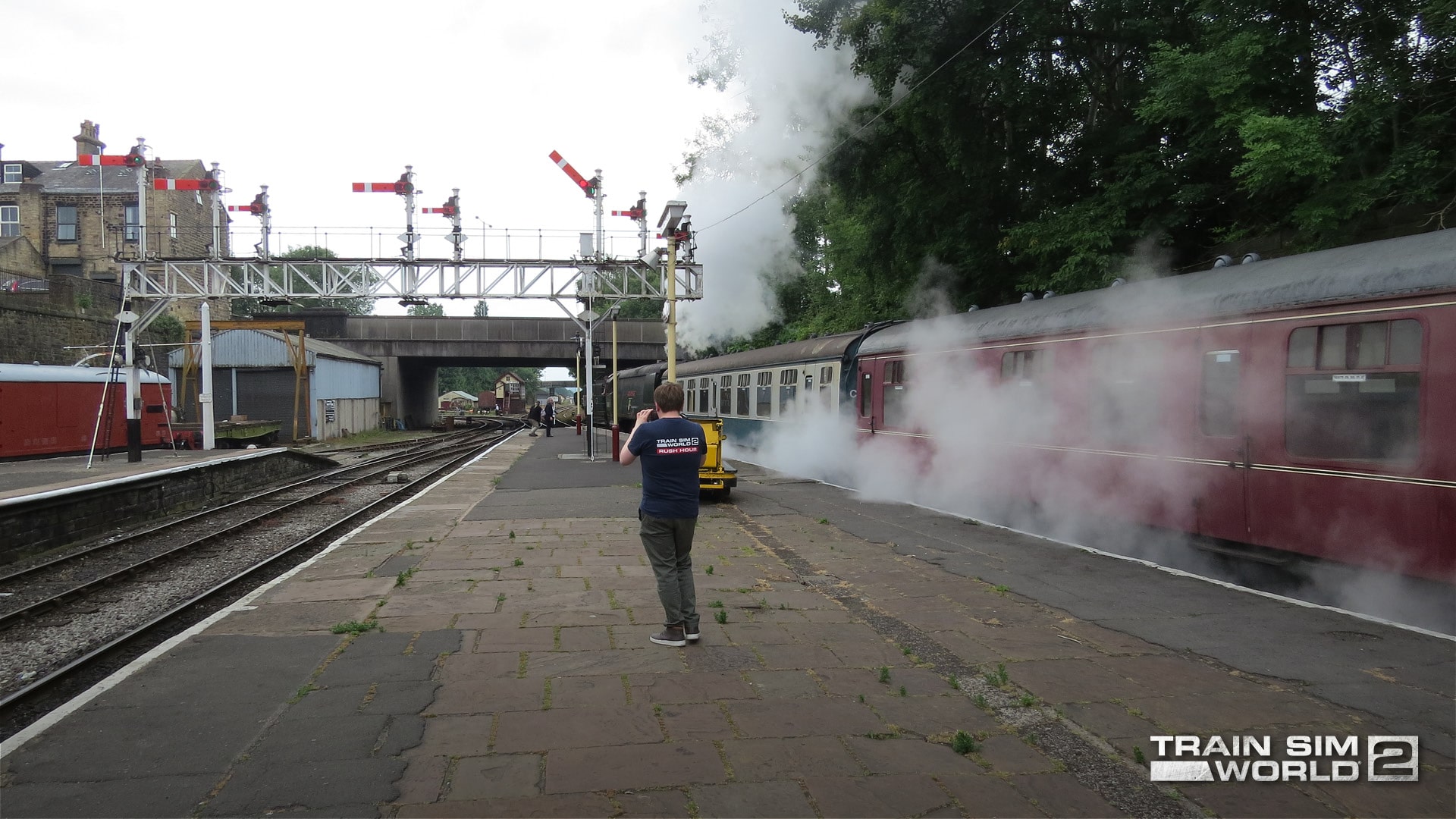 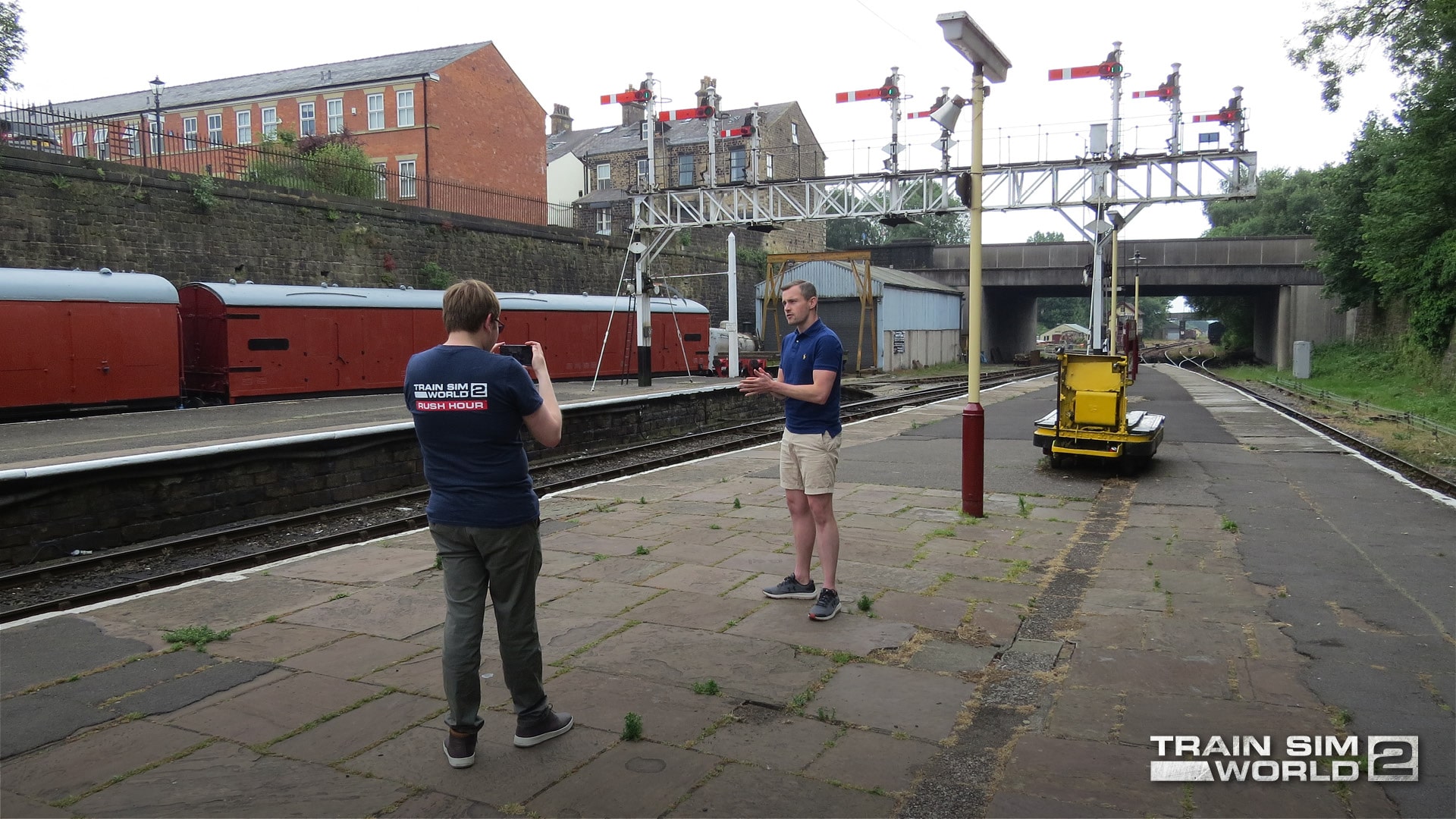 You can find out more about the East Lancs Railway’s exciting events schedule HERE! 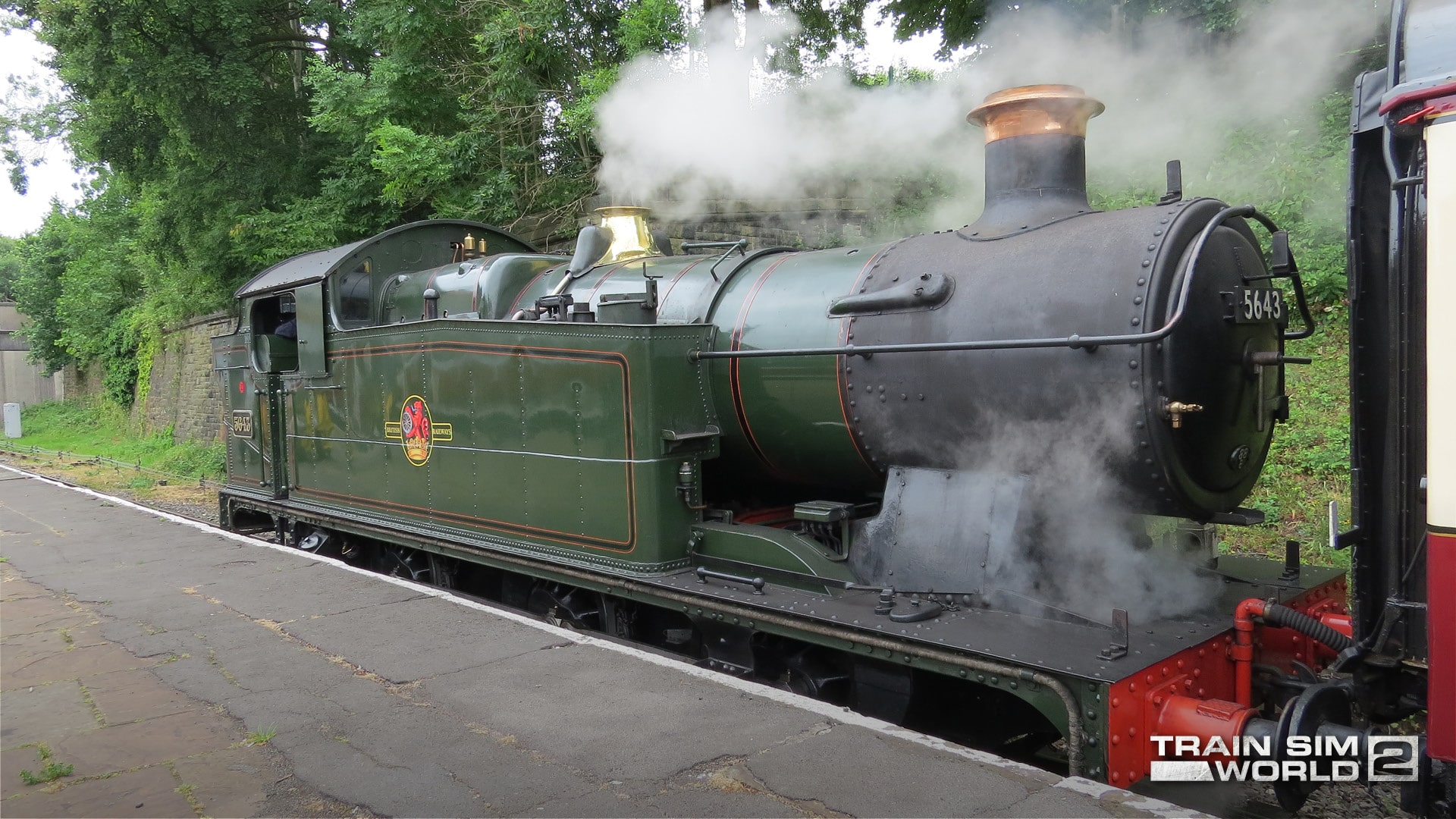 To wrap up our day Mark had kindly arranged for us to have a trip along the line. Our Locomotive would be GWR 56xx Class BR 5643. This small but powerful tank engine spent much of its working life hauling heavy coal trains throughout the challenging South Wales Valleys, so it made light work of the BR MK1 coaches that formed our train. Gliding through the beautiful East Lancashire countryside it was hard to believe that this idyllic railway was only a stone's throw from the City of Manchester, powering its way past farms, rivers, and cottages the railway passes through numerous stations and past several signal boxes, each restored with the same level of care and attention as Bury Station. 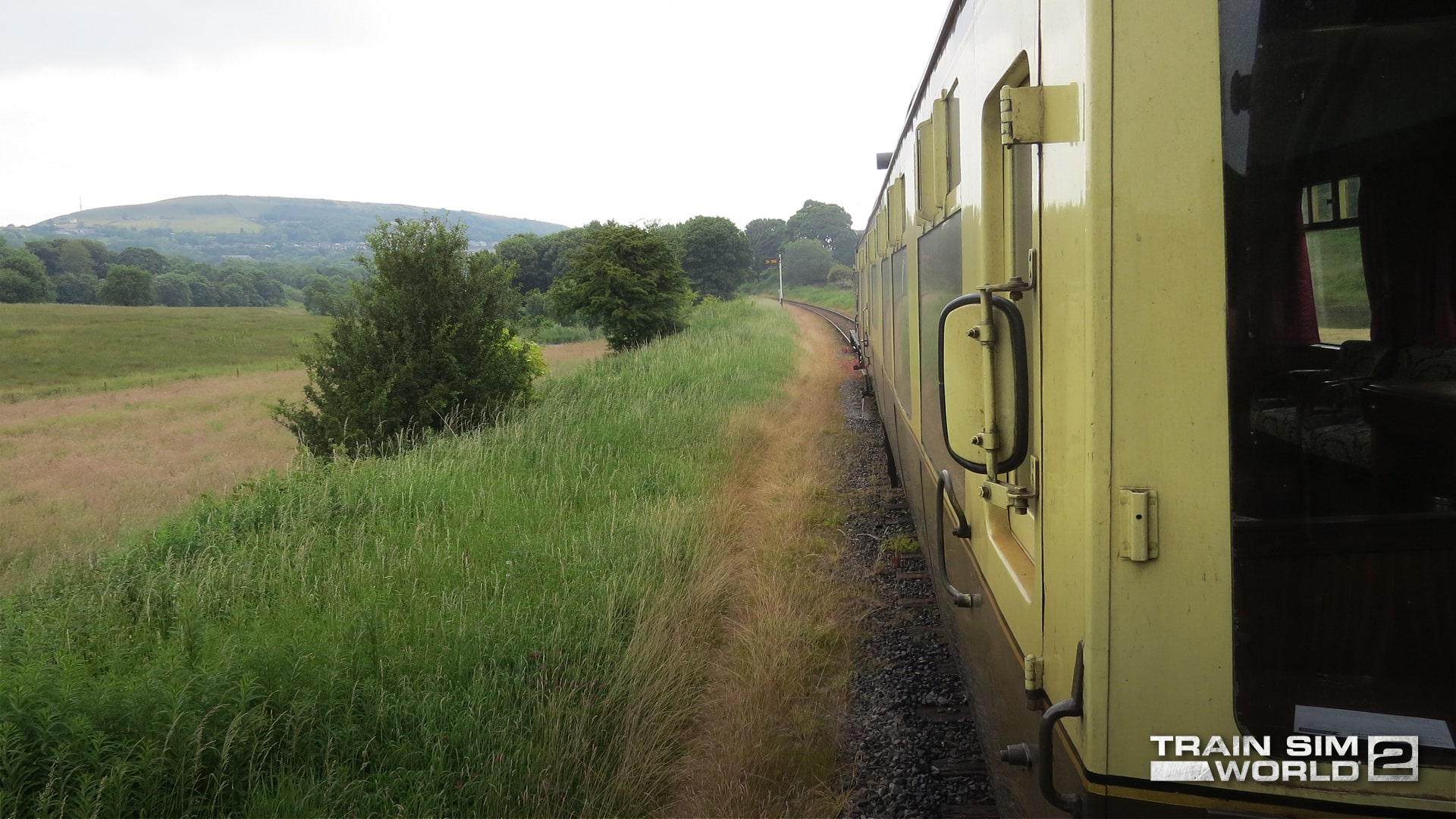 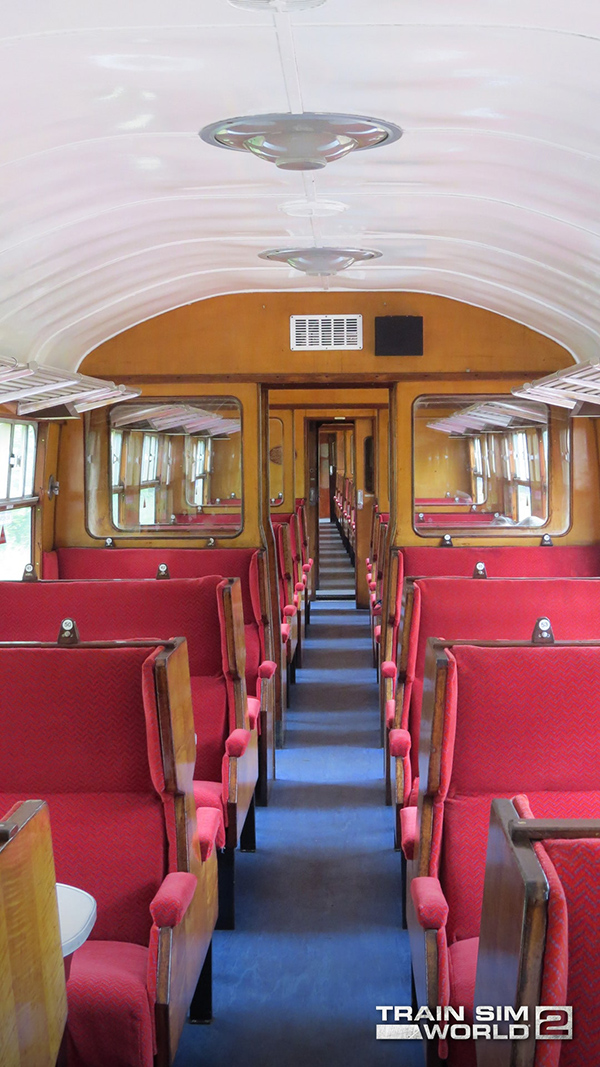 Once we had reached the end of the line at Rawtenstall Station we were able to take a few moments to grab some photographs and have a look around, this station is home to another trackside pub and would make a fitting end to any journey. Talking his way onto the loco’s footplate for the second time that day, Jamie’s day was complete! I was lucky enough to get on there myself too.

With our Journey back to Bury bringing our day to a close we grabbed some final shots of the station, and very reluctantly said our goodbyes and headed for home. 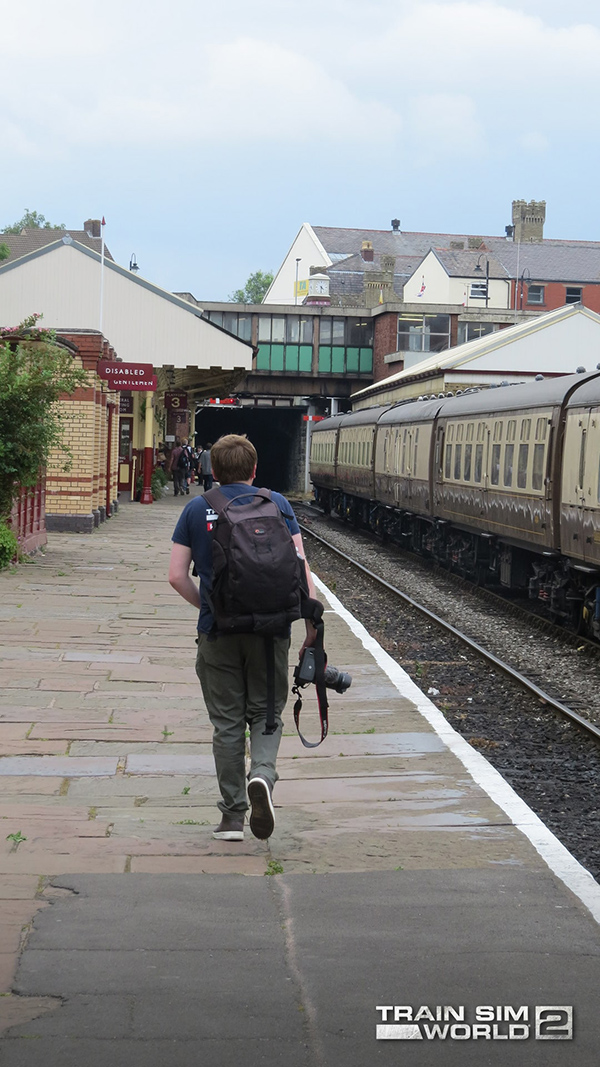 From all of us at Dovetail Games but particularly JD, Jamie, and I, we would like to thank Mark and the rest of the East Lancs Railway and Bury Transport Museum team for being such gracious hosts, we all had a fantastic time and would encourage all of our readers to head to the railway and museum as soon as possible. Whether you are planning a holiday in that area of the country, or considering it for a school trip, or special event we would highly recommend it to everyone.
Written and photographs by Chris Payne
If you would like to know more about the Museum and Railway head to the links below.
Find out more about Bury Museum HERE!
Find out more about East Lancs Railway HERE!
To see our East lancs Railway special Railfan TV broadcast, and loads more exciting content like it, check out our Twitch or YouTube channels now!. Dont forget to hit subscribe too so you dont miss out on our next broadcast.
Spirit of Steam: Liverpool Lime Street to Crewe is available now on Xbox One, Xbox Series X|S, PlayStation 4, PlayStation 5, Epic, and Steam!
Steam Store | PlayStation (Europe) | PlayStation (US) | Xbox | Epic
Find out more about Train Sim World 2 and more by following @trainsimworld on Twitter and Facebook for regular updates.