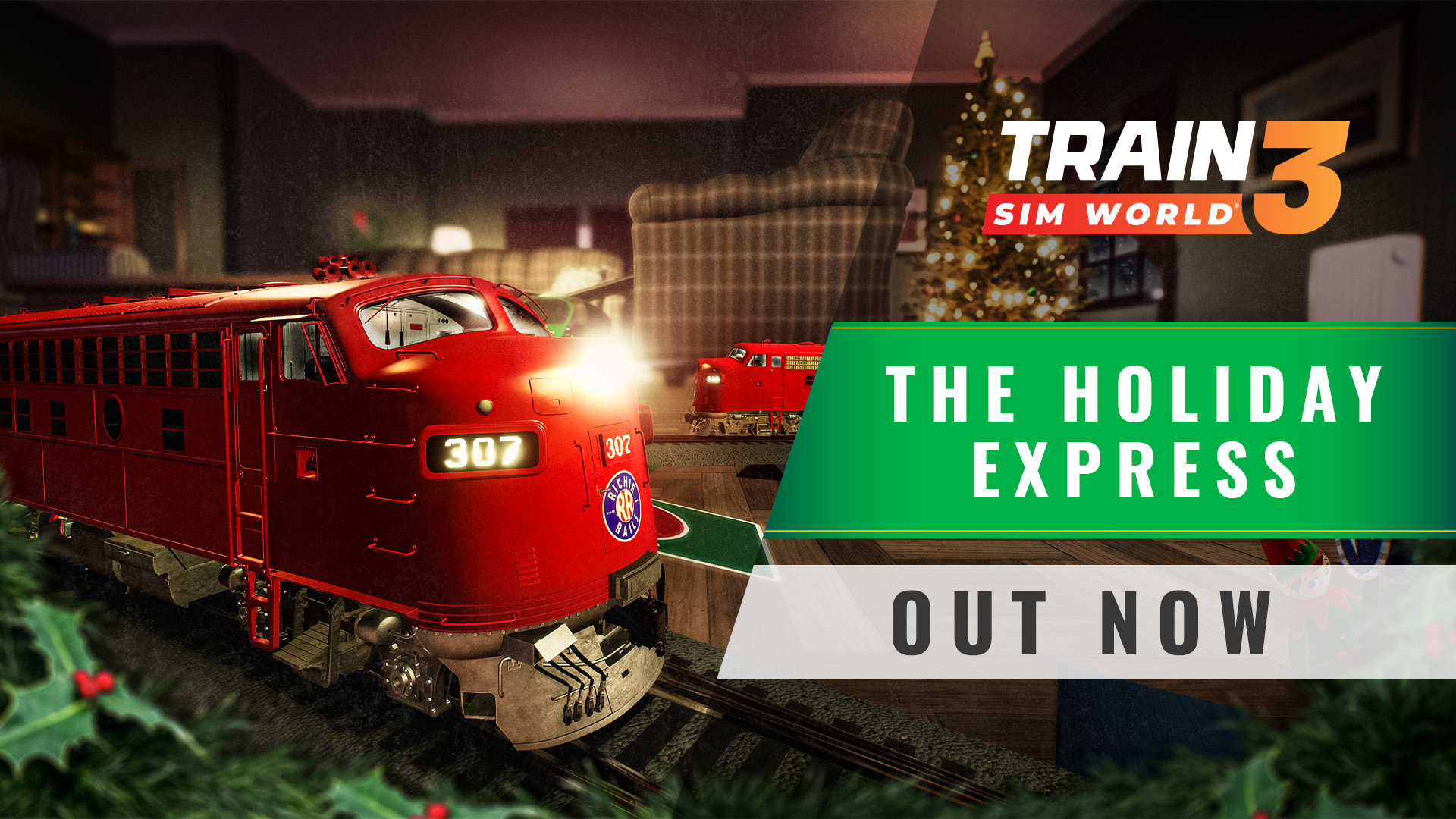 Train Sim World 3: The Holiday Express – Runaway Elf Add-on is out now! Gather the family round the screen, fire up the miniature F7 and get ready to undo the mischief caused by the naughty elf. It’s time to save Christmas! Richie Rails to the rescue!
Text alignment

Available on these platforms!

There’s less than two weeks to go until Christmas Day! Treat yo’elf this festive season and enjoy a Train Sim World experience on a completely different scale. The nostalgia-filled 1980s living room setting sees a miniature railway threaded between furniture and a naughty elf on the loose, leaving presents and batteries where they shouldn’t be! The glow of the fire and the flicker of the CRT television create an atmosphere befitting of a quiet Christmas Eve but things must be put in order before the clock ticks down to midnight. 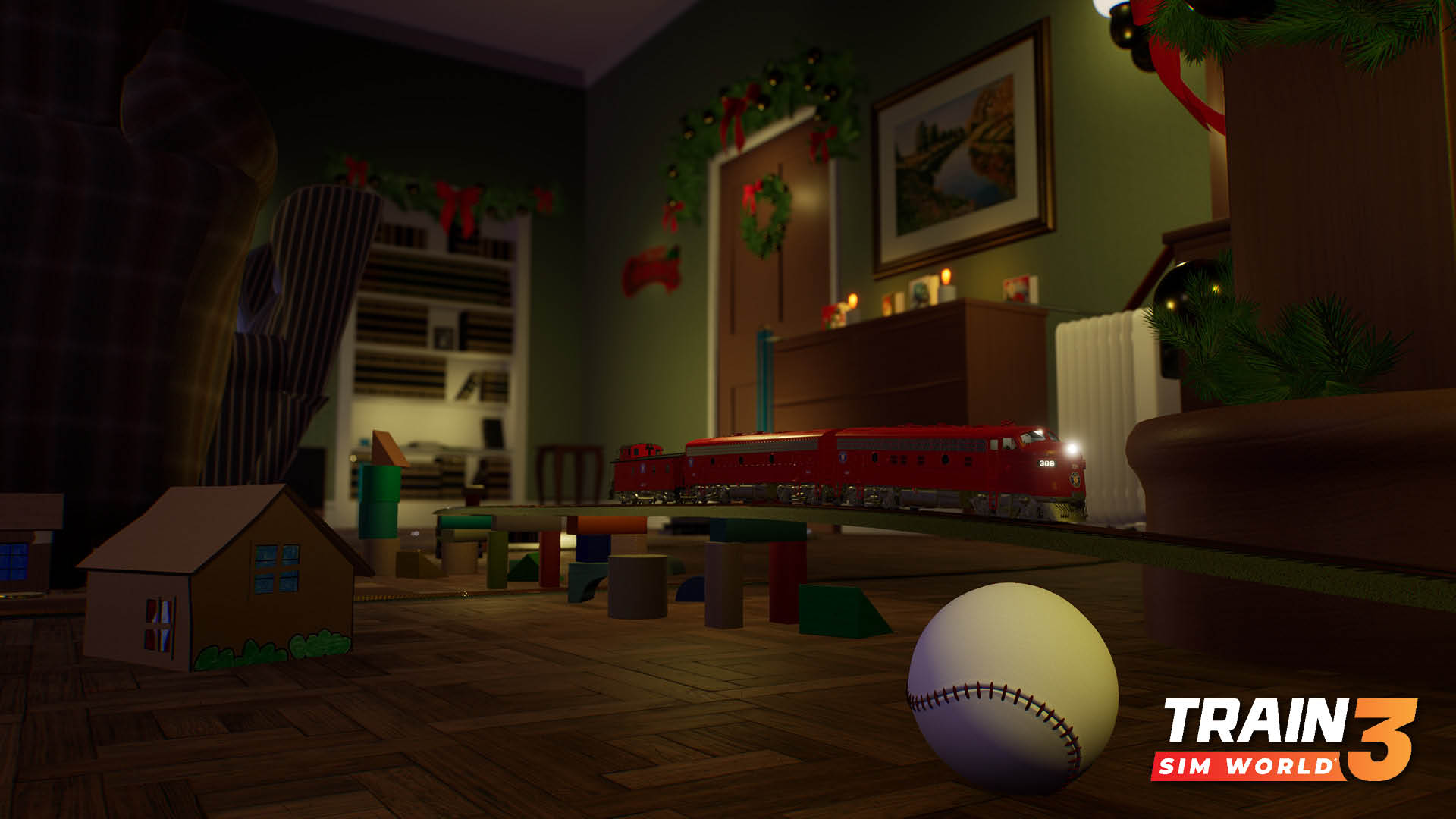 Running round the track is the Richie Rails F7, fitted with simplified controls that engineers and drivers of all ages can have fun with. Whether you’re getting to know your surroundings by exploring every inch of the layout, or carefully plotting a course to switch the right stock out of the right yards, this version of the F7 is perfect for the task at hand. There’s plenty to see around the room and for those wanting a bit more freedom of movement, a driveable jeep can be unlocked – a first for Train Sim World! 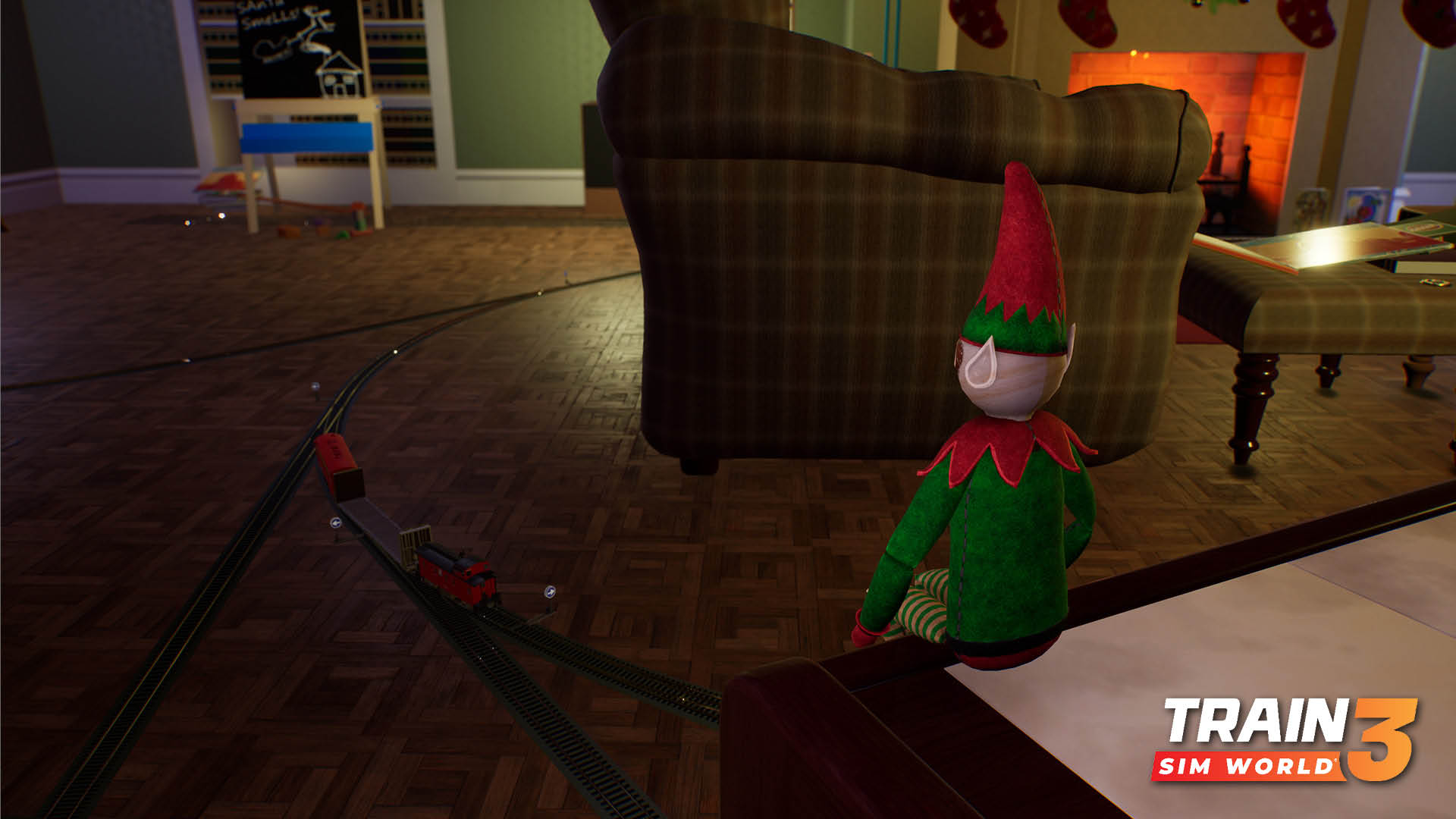 With a selection of scenarios to play, collecting up items and putting the elf back on that naughty step, there’s work to be done before you can all relax for Christmas! But once all is cleared, using Scenario Planner, the train set is yours to enjoy with any of the trains and locomotives from Train Sim World 3 and previously-owned Train Sim World Compatible content. 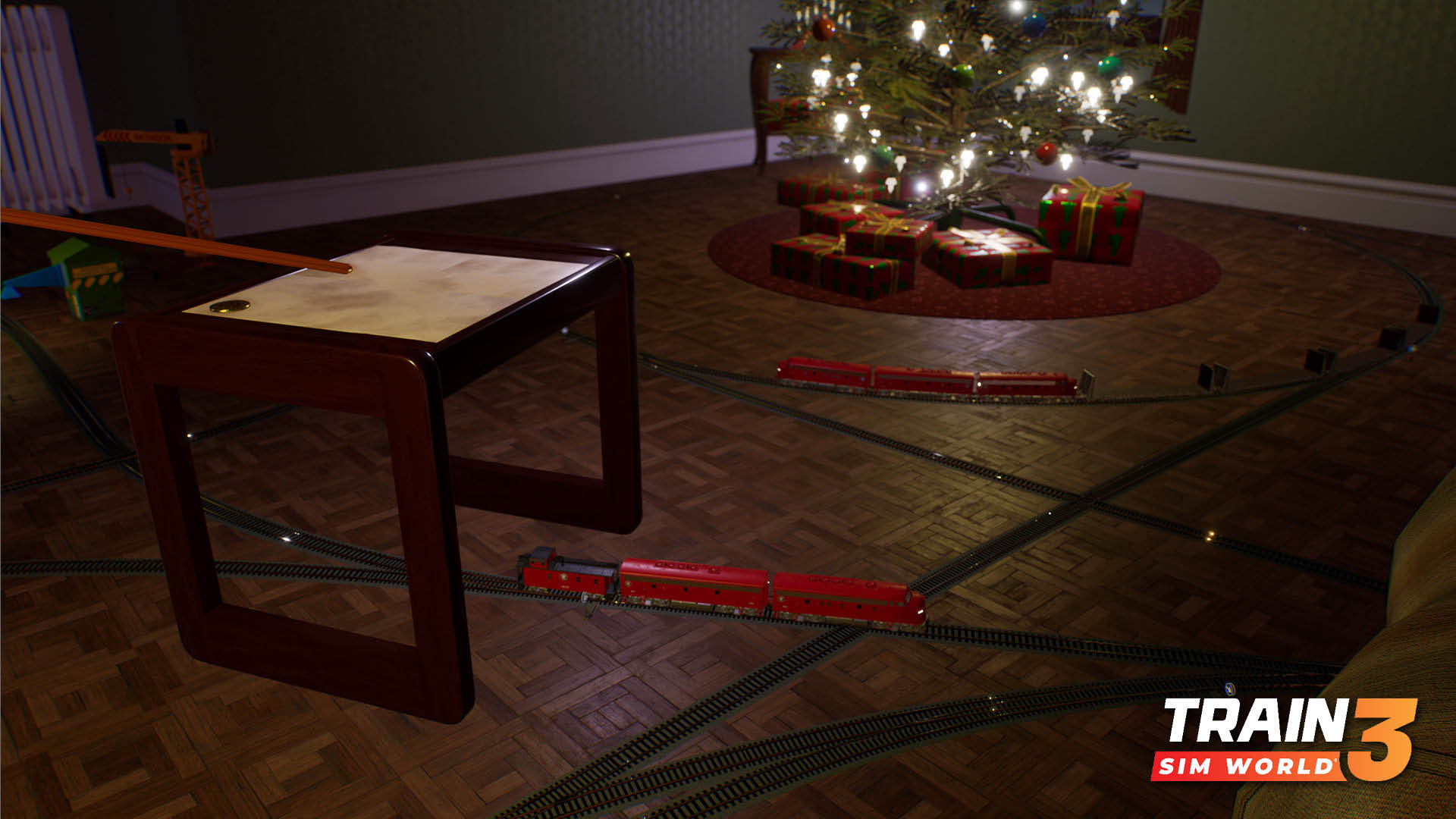 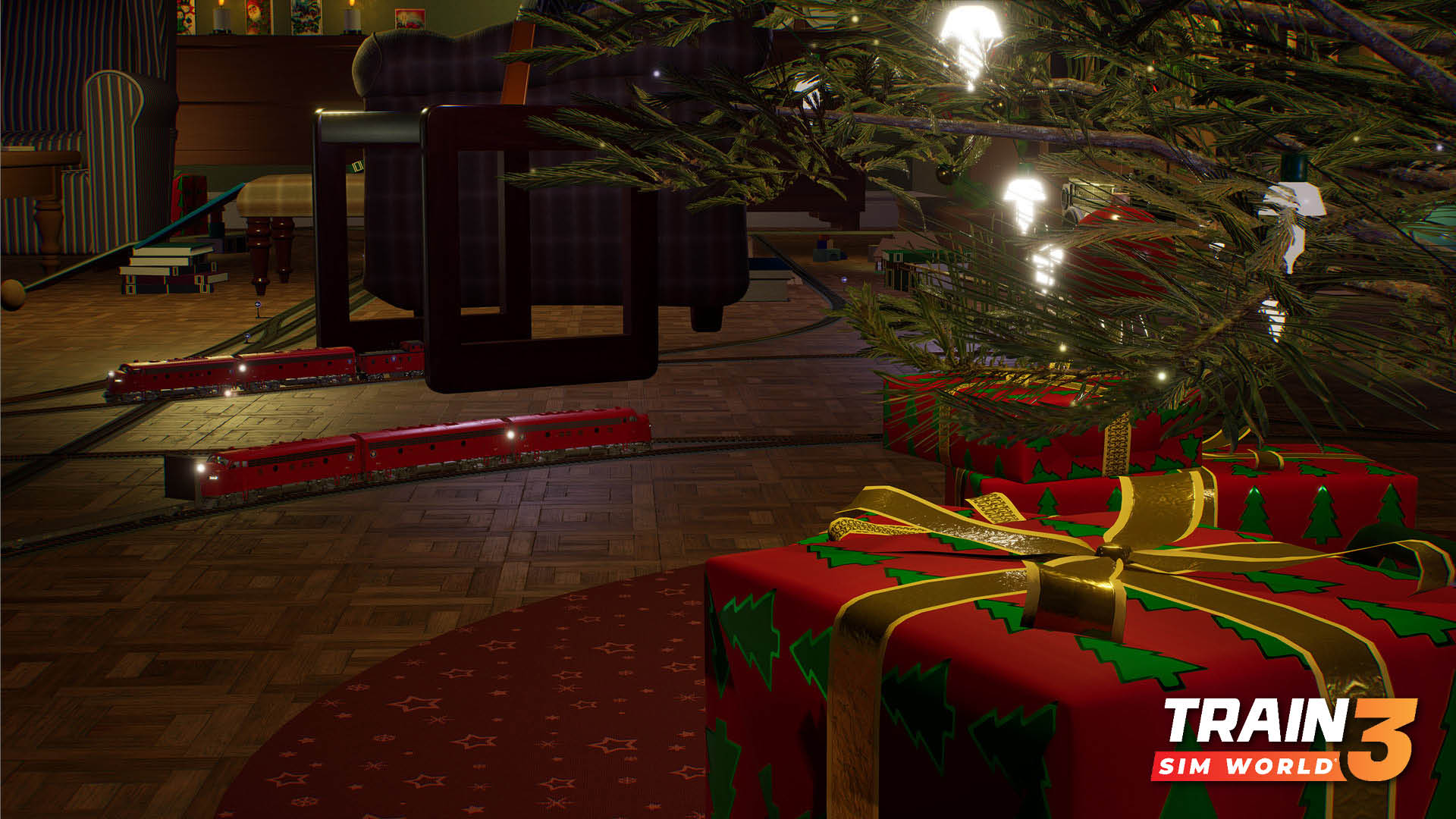 Beyond the living room, a host of festive Community activities are taking place in-game and on social media. This year we have decided to create something new and fun to celebrate The Holiday Express - a way to earn in-game rewards, DLC keys and even a mystery grand prize! You can get involved on our socials each day with daily competitions and puzzles. There’s also some festive Mastery Challenges in-game to get stuck into and a combined Community Challenge for everyone to contribute towards whilst playing their favourite routes, with some festive surprises appearing in Training Center for those who complete them.
Some of you have already been sketching Elves and folding up paper train models, and we're excited to see you tackle the remaining challenges!
If you need any more information on the event, please refer to our Holiday Social Event Megathread 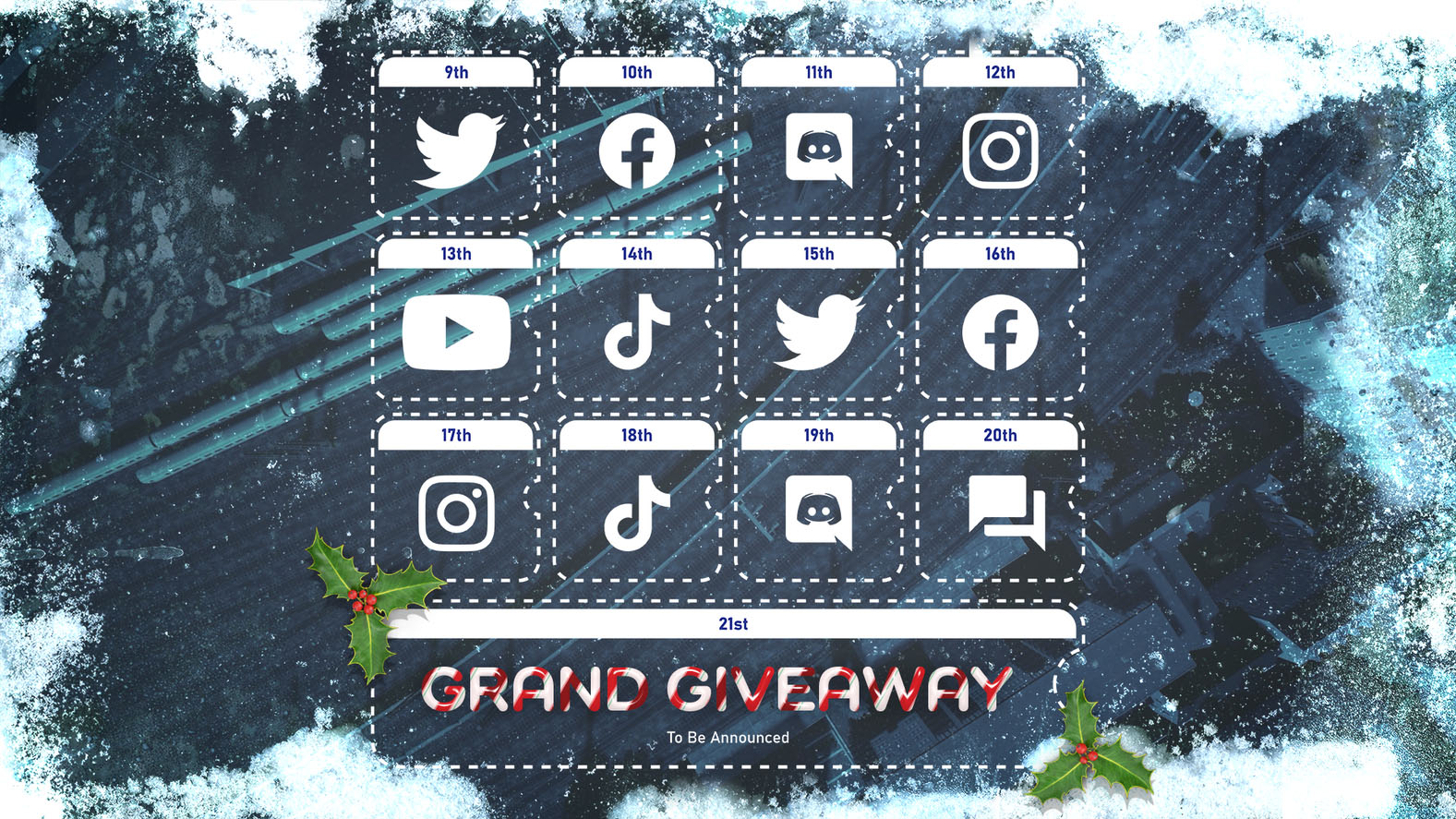 Plus, later this month we have a Grand Prize Giveaway with some amazing railway-themed prizes to be won from 21st December!
Train Sim World 3: The Holiday Express – Runaway Elf Add-on is out now on Xbox One, Xbox Series X|S, PlayStation 4, PlayStation 5, Epic Games Store, and Steam! Available for £7.99/$9.99/€9.99
(Estimated download size for PlayStation platforms: PS5 = 1GB, PS4 = 500MB)
A 20% launch discount is available for one week on the Steam and Epic Stores as well as the PlayStation Store for PS Plus members. A Game Pass discount will also be available on Xbox shortly after launch.
Join us for festivities and frolics from two naughty elves of our own (definitely not just Alex and Adam...) tonight at 17:00 UTC for a Let's Play of The Holiday Express – Runaway Elf.
Find out more about the giveaways, live stream, The Holiday Express – Runaway Elf, Train Sim World 3, and more by following @trainsimworld on Twitter, Instagram, Facebook, YouTube, Twitch, and TikTok.

Images displayed in this article may depict content that is still in development. The licensed brands may not have been approved by their respective owner and some artwork may still be pending approval.