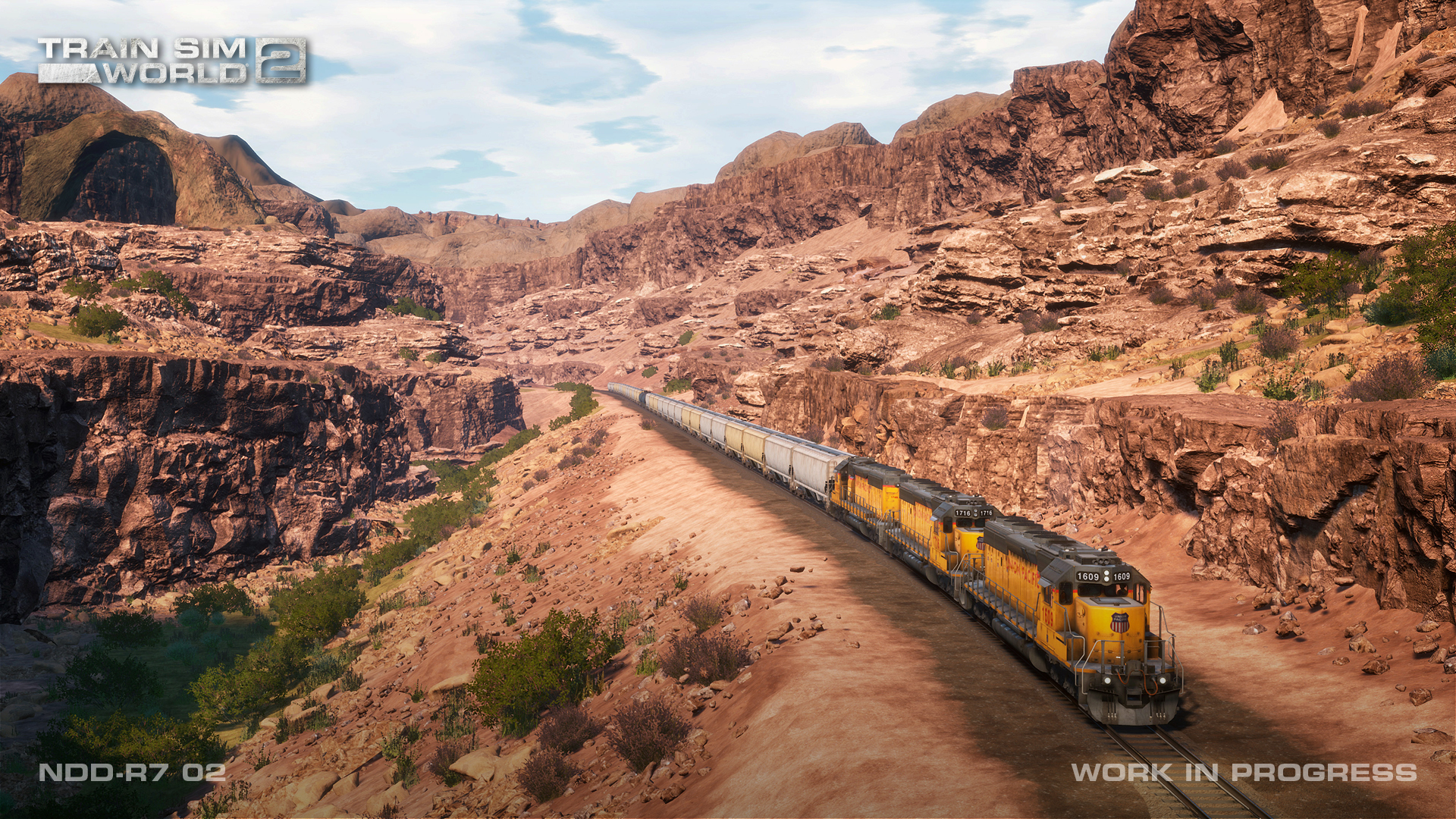 Written by Gary Dolzall
Union Pacific’s Cane Creek Subdivision is among the most dramatic and famous scenic rail lines in the American West, and it’s coming soon to Train Sim World 2!
Get ready to journey through awe-inspiring, rugged, and remote American West desert and canyon country in Utah while tackling heavy tonnage and daunting grades – with the upcoming Union Pacific Cane Creek Subdivision route for Train Sim World 2! Masterfully developed for Train Sim World 2 by Skyhook Games, this upcoming route re-creates Union Pacific’s famed Cane Creek Subdivision, also known as the Cane Creek Branch. Widely renowned for its extraordinary and awesome western scenery, the Cane Creek Subdivision extends from a connection with Union Pacific’s Green River Subdivision at Brendel, Utah south to Potash, Utah, 35.8 route miles. As created for Train Sim World 2, the route will also include a five-mile section of the UP Green River Subdivision east from Brendel to Thompson, Utah.
The Cane Creek Subdivision will offer heavy-haul, tough American freight railroading at its memorable and challenging best. From Potash to Brendel, the Cane Creek line climbs nearly a thousand feet in elevation over a “roller coaster” profile featuring frequent gradients of 1.2 percent, curves of up to 6 degrees, passage through 7,059-foot-long Bootlegger Tunnel, and a journey amid the towering cliffs of Moab, Bootlegger, and Dragon Fly Canyons. The Cane Creek Branch is a rail line that requires big diesels and lots of horsepower, and you’ll take the throttle of the Union Pacific’s potent General Electric AC4400CW and veteran Electro-Motive SD40-2 diesels which will be included with the Train Sim World 2 route.
By American railroad standards, the Cane Creek Branch is a newcomer. In the late 1950s, plans took form to tap massive potash deposits found along the Colorado River in eastern Utah. By 1960, development of what would evolve into today’s sprawling potash mine and processing facility south of Moab and near Cane Creek were rapidly taking form, and the Denver & Rio Grande Western agreed to build a new branch from its main line at Brendel. Grading and construction of the new branch line was contracted to Morrison-Knudsen and work began in August 1961. Morrison-Knudsen completed its work in September 1962 and D&RGW crews moved in to lay the tracks.
The potash mine and facility at the south end of the line began production in late 1964 and the branch was operated by D&RGW as its Cane Creek Branch until the road’s merger into Union Pacific (D&RGW was combined with the Southern Pacific in 1988 and merged into Union Pacific in 1996). While there have been fluctuations in the amounts of potash being moved over the Cane Creek Branch, it has been in nearly continuous use since the 1960s.
Remarkably, the Cane Creek line gained a second purpose – and source of extensive tonnage – in 2008. Moab had long been the site of a Uranium mill which closed in 1984, leaving approximately 12 million tons of dirt tailings behind. While these tailings are only modestly radioactive, the risk of their erosion into the nearby Colorado River required eventually reclamation. Under the auspices of the United States Department of Energy, a burial site for the tailings was developed at Brendel and train loads of the contaminated soil began moving over the length of the Cane Creek Subdivision to Brendel. These unusual rail movements, nicknamed “the dirty dirt trains,” are expected to continue until approximately 2028. Given that both the potash and contaminated soil tonnage involves carrying loads northbound, the climb from Potash and Moab to Brendel requires plenty of horsepower.
The upcoming Cane Creek Subdivision for Train Sim World 2 will take you into the very heart of Utah’s legendary desert and canyon country in scenic settings that are awesomely realistic. Aboard superbly modeled Union Pacific GE AC4400CW and EMD SD40-2 diesels, you work heavy tonnage up and down daunting grades, handle switching at the sprawling Potash mine and facility and Moab dirt loading site, travel along the historic Colorado River, and pass below the famed sandstone Corona Arch! In addition to its GE and EMD diesel locomotives, the route will include two types of covered hoppers, an open-top hopper, and tank car. And a realistic selection of 12 scenarios and a challenging 24-hour timetable that will fully test your skills as an engineer! Stay tuned here at Dovetail Live and we will be further exploring the upcoming route and its distinctive features and challenging operations! – Gary Dolzall 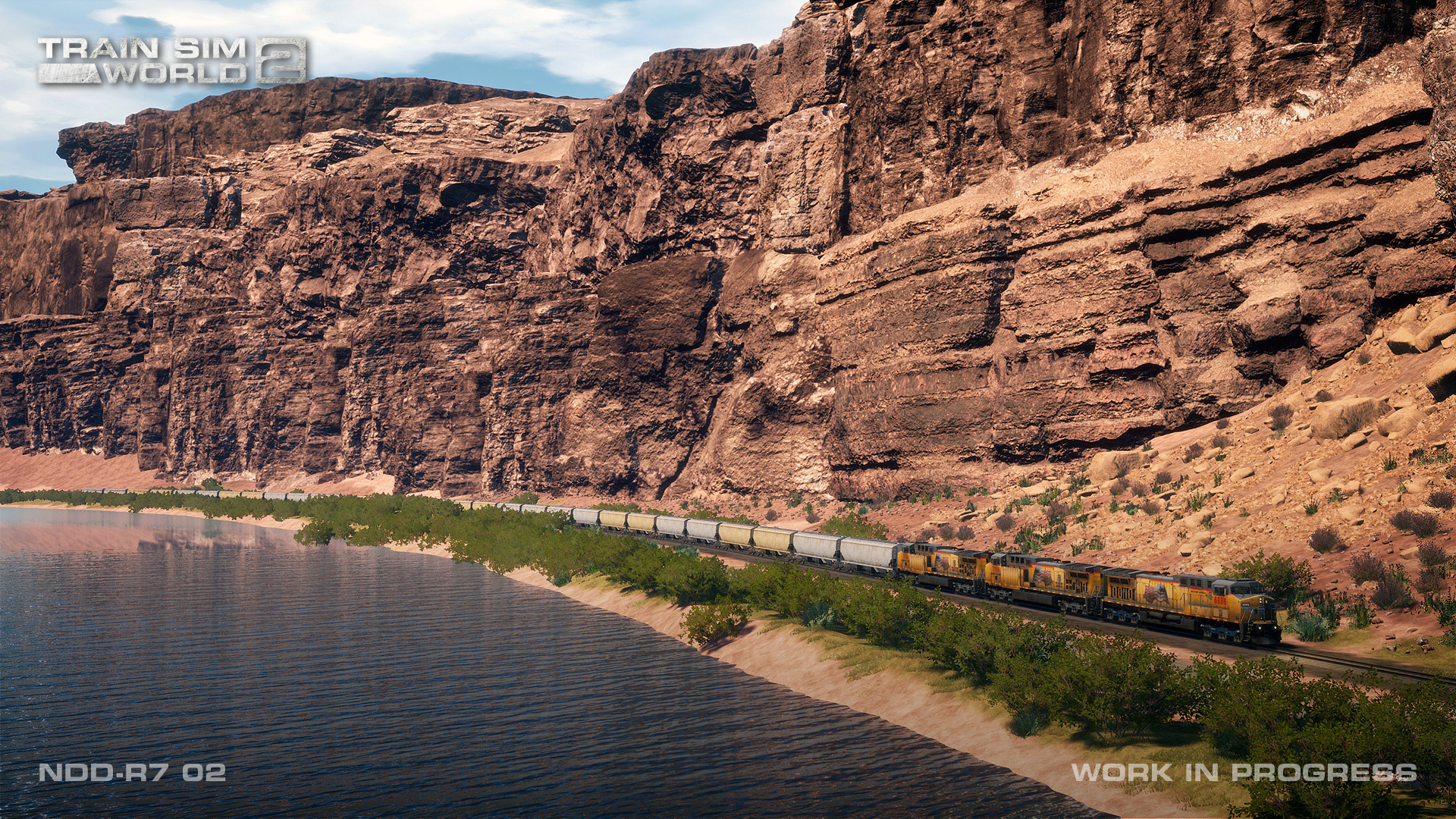 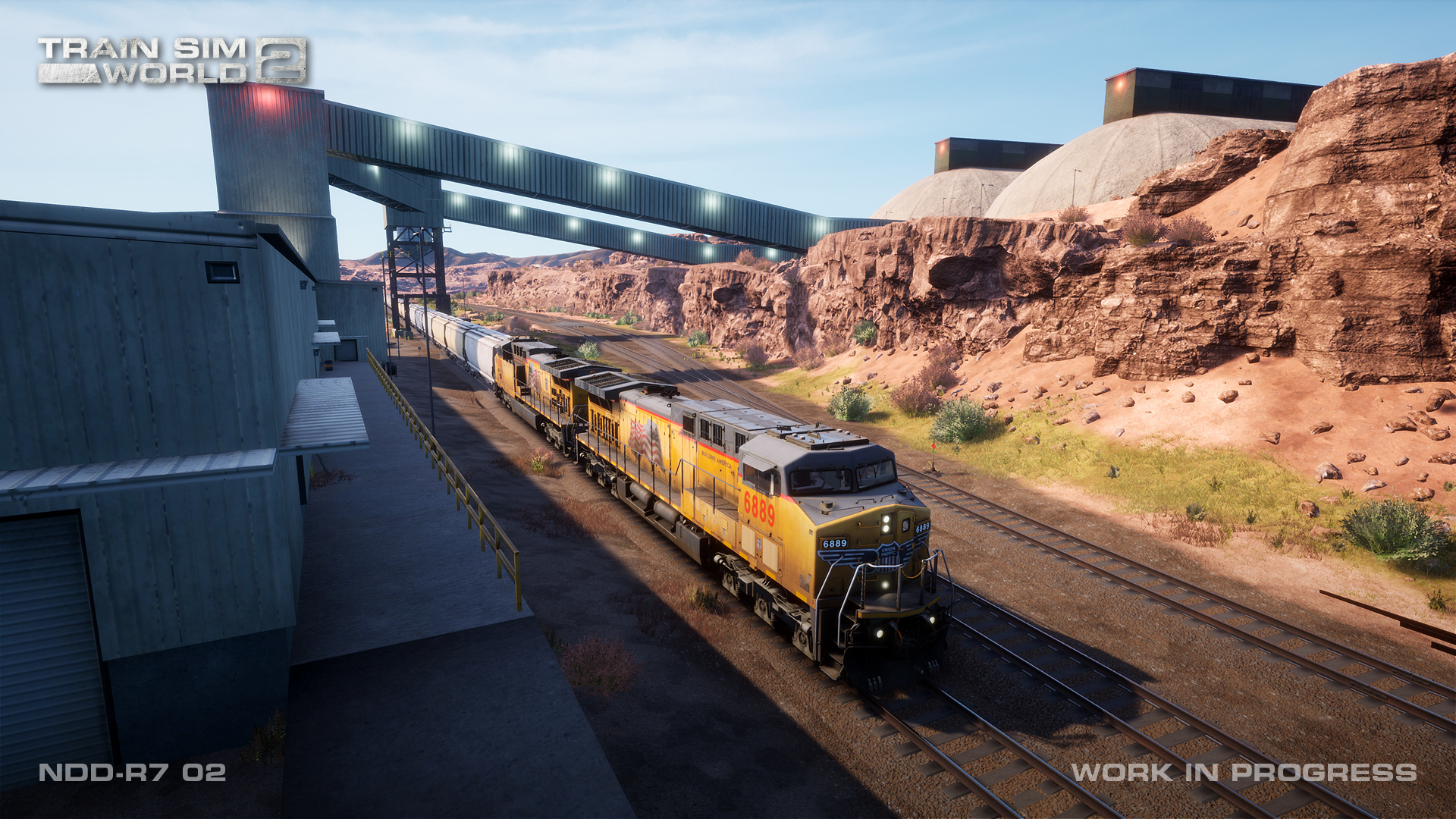 The Cane Creek Subdivision extends from a connection with Union Pacific’s Green River Subdivision at Brendel, Utah south Potash, Utah, home to a massive potash mine and facility. On the upcoming Cane Creek Subdivision route, UP GE AC4400CWs are drawing covered hoppers through the Potash loader. Note: Screenshots depict content while in development. 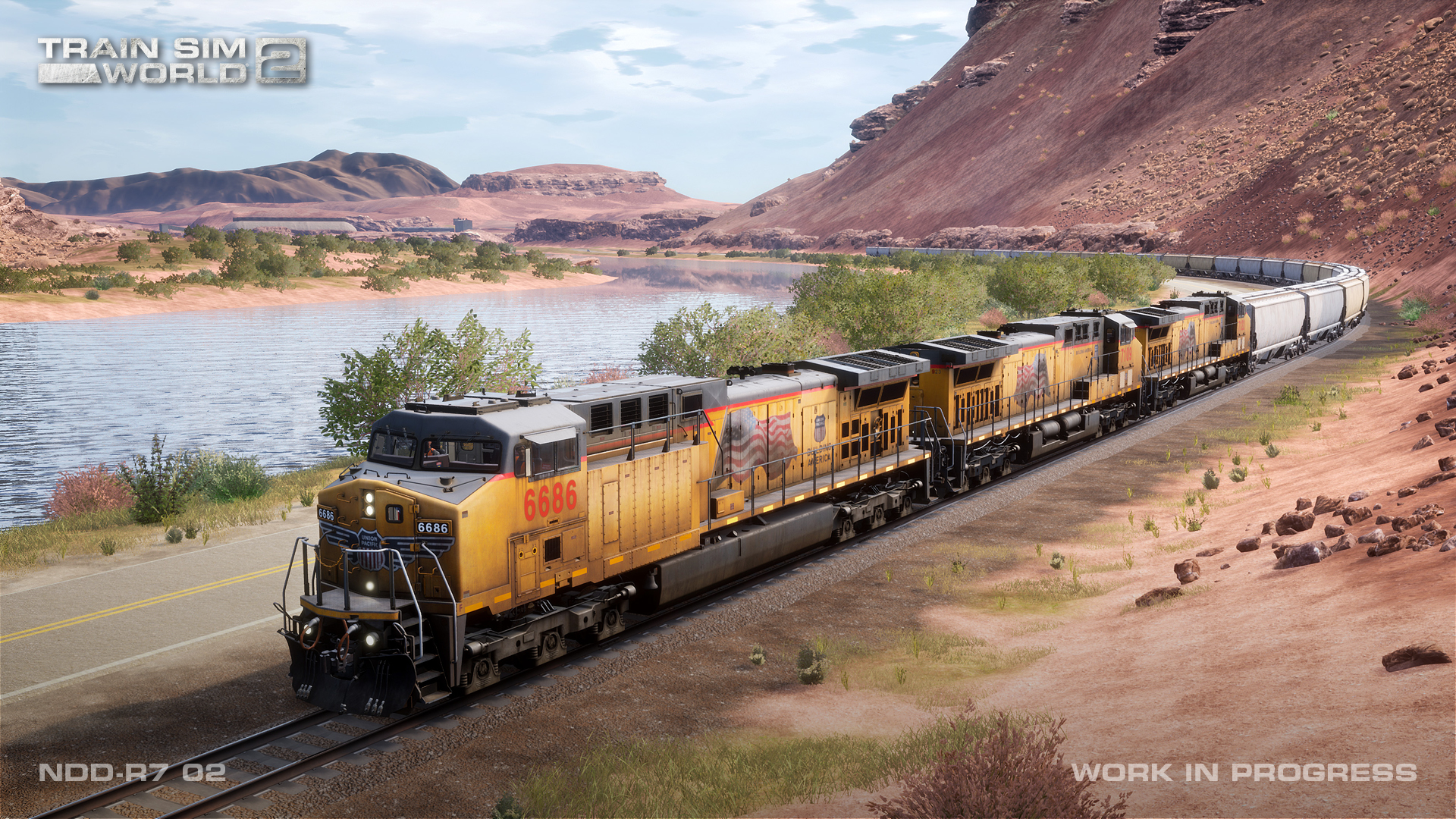 With the mine at Potash in the distance, a potash train is heading north on the Cane Creek Branch and curves along the banks of the legendary Colorado River. Re-created in superb detail, the GE AC4400CW, together with a UP EMD SD40-2, will be included with the route. 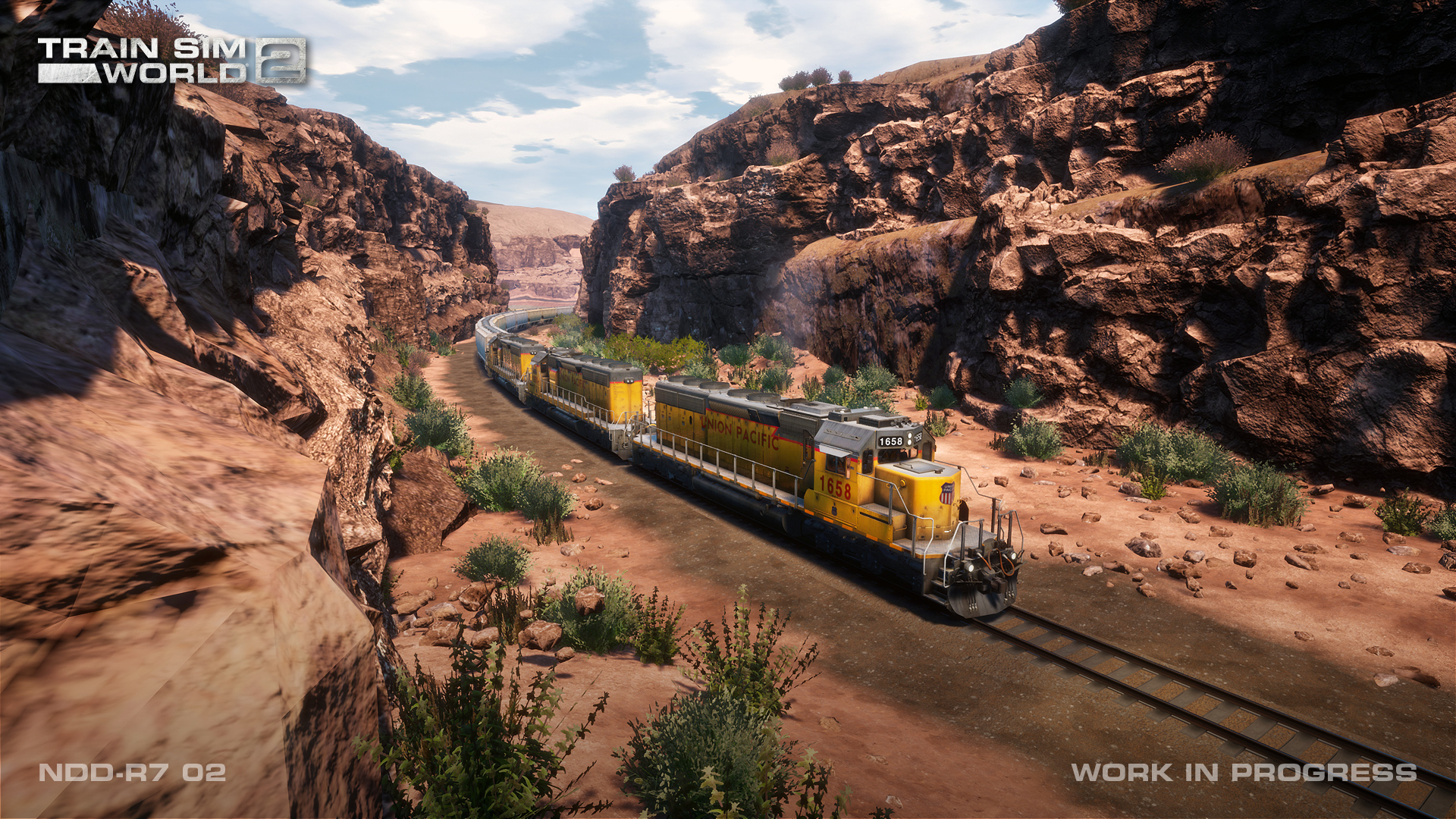 Simply put, the Cane Creek Branch’s passage through Bootlegger Canyon, between Potash and Moab, is among the most rugged, remote, and awe-inspiring rail scenes in all of America! A trio of Union Pacific EMD SD40-2s in the railroad’s timeliness yellow and gray livery are grinding north through the extraordinary canyon. 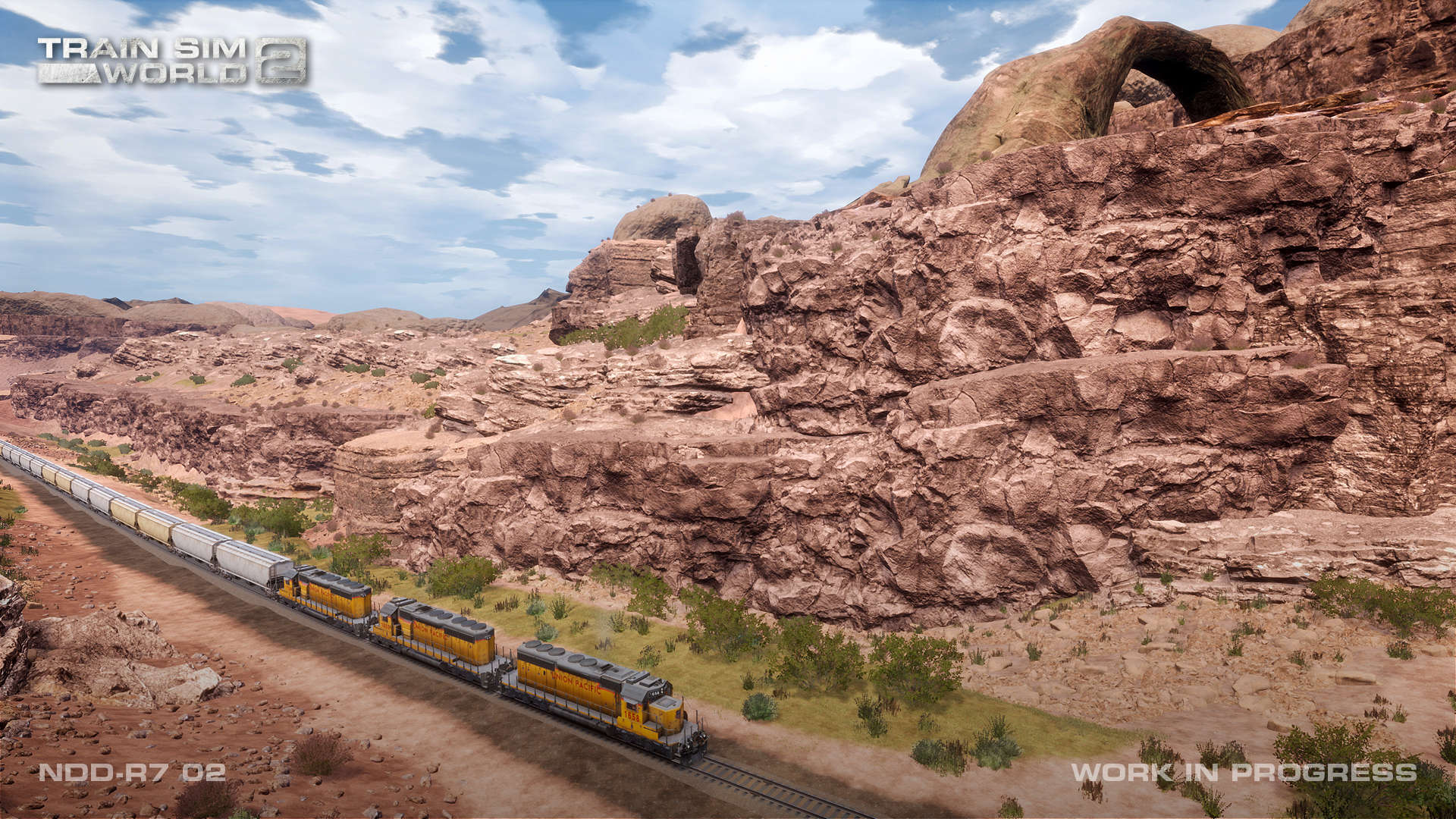 The scenic wonders along the upcoming Cane Creek Subdivision for Train Sim World 2 are nearly countless, but among the most famous is the sandstone Corona Arch south of Moab. 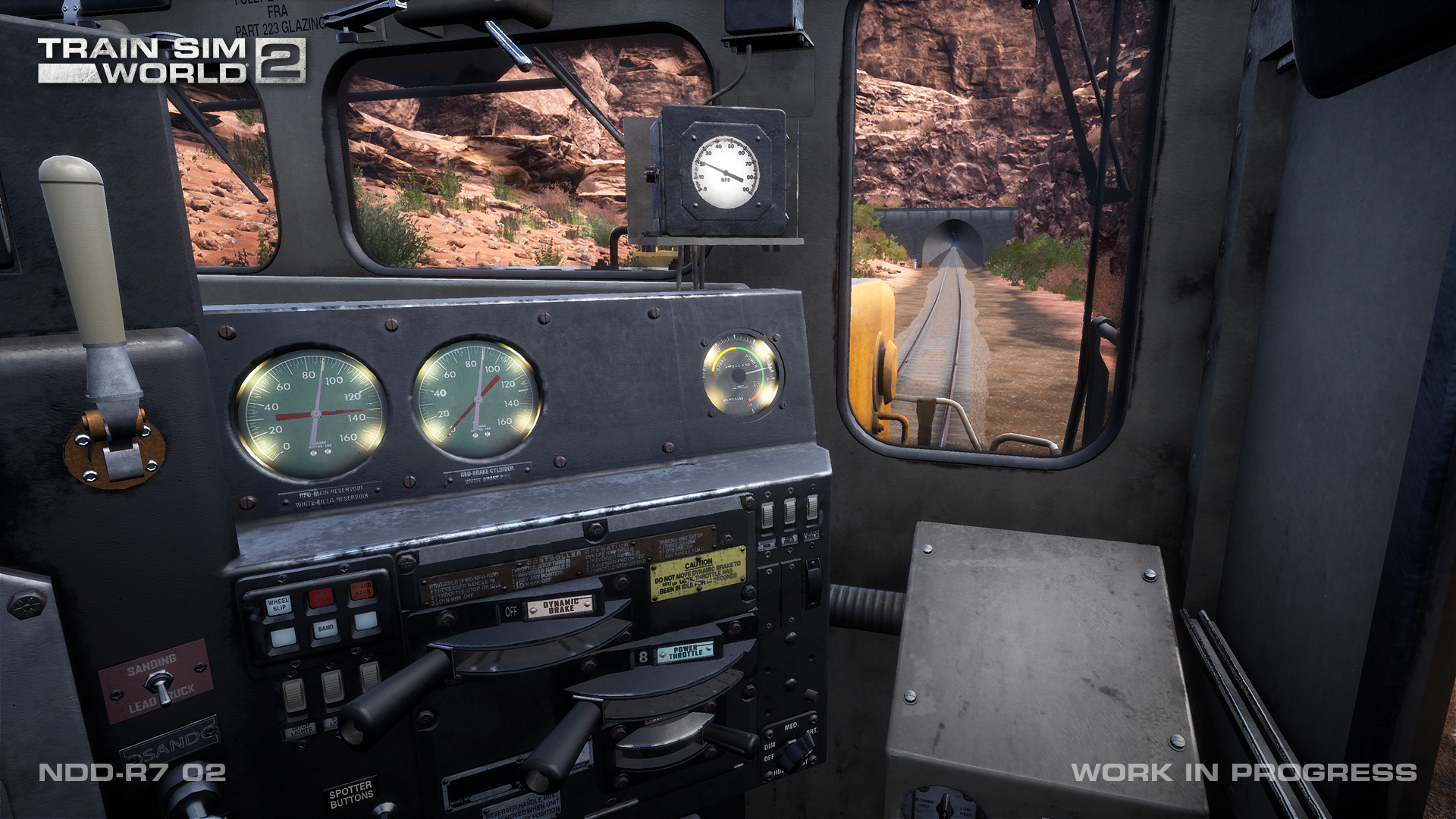 During construction of the Cane Creek Branch in the early 1960s, one of the most challenging tasks was the boring of 7,059-foot-long Bootlegger Tunnel, located immediately south of Moab. In an engineer’s eye view, a northbound potash train powered by Union Pacific SD40-2s approaches the tunnel’s south bore (above), then clears the tunnel and arrives in Moab (below). 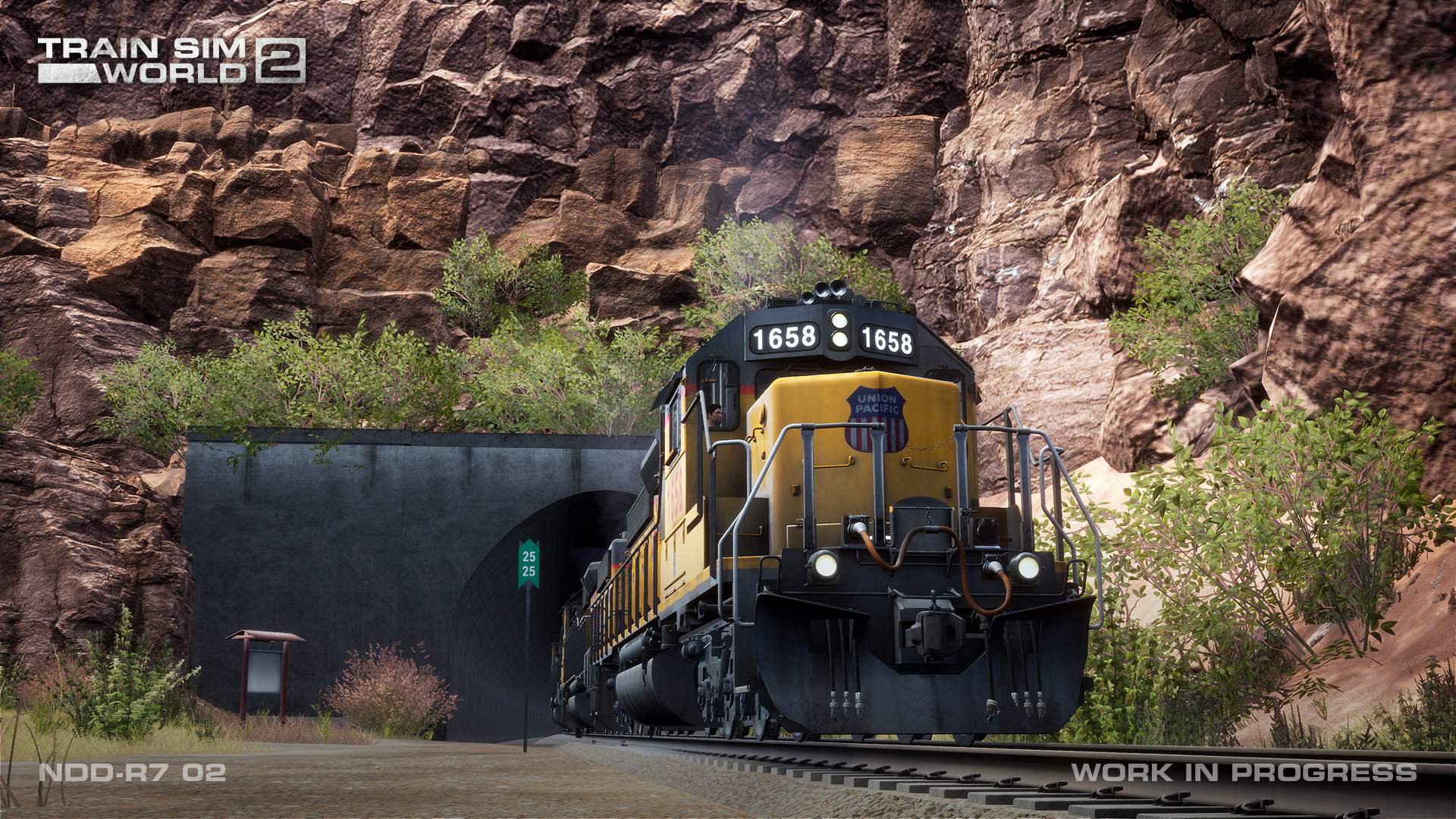 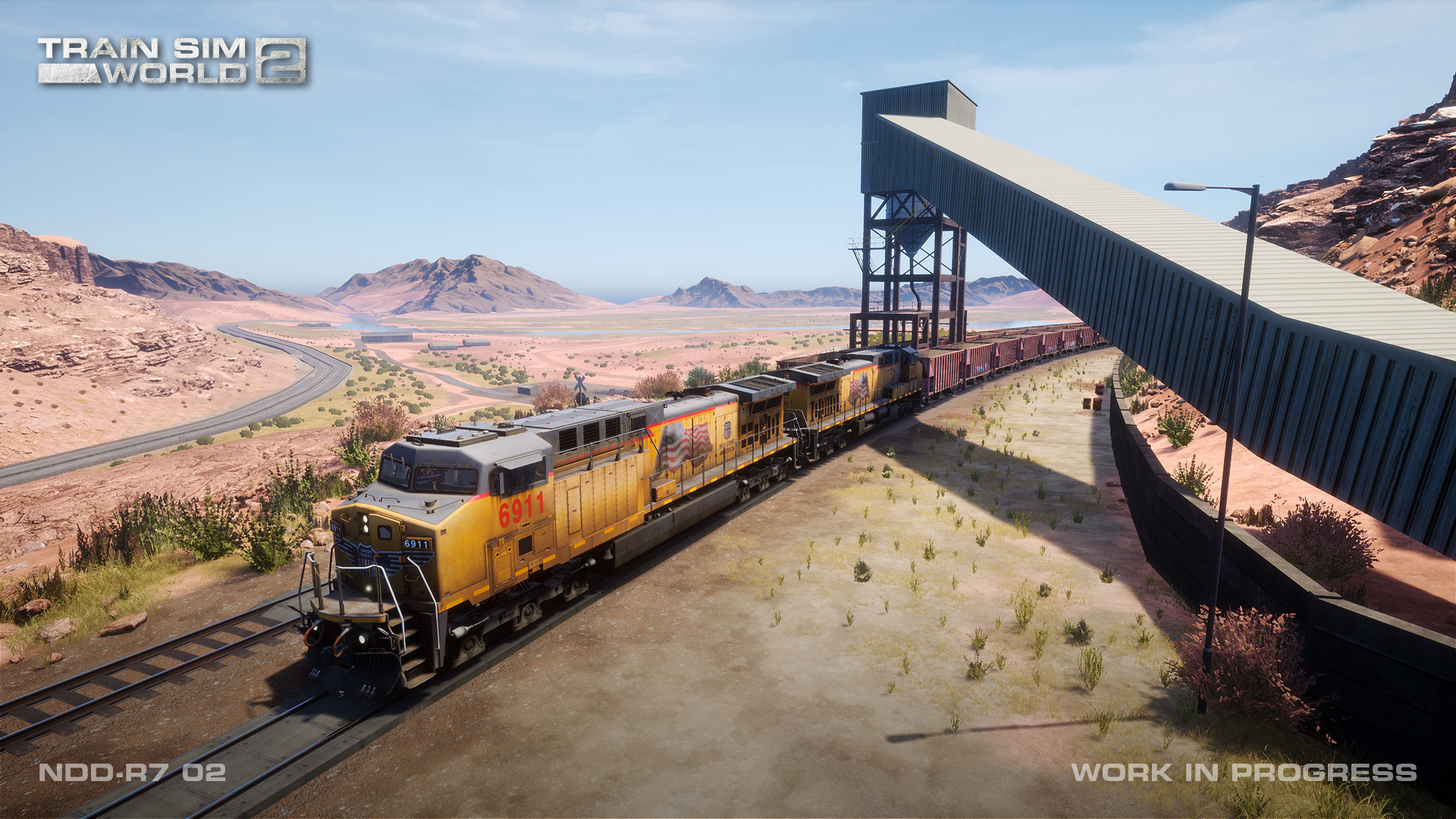 Moab, Utah had long been the site of a Uranium mill which closed in 1984, leaving approximately 12 million tons of dirt tailings behind. Union Pacific now transports these tailings to Brendel for burial. At Moab, Union Pacific AC4400CW 6911 is on the point of a “dirty dirt train” preparing to depart for Brendel. 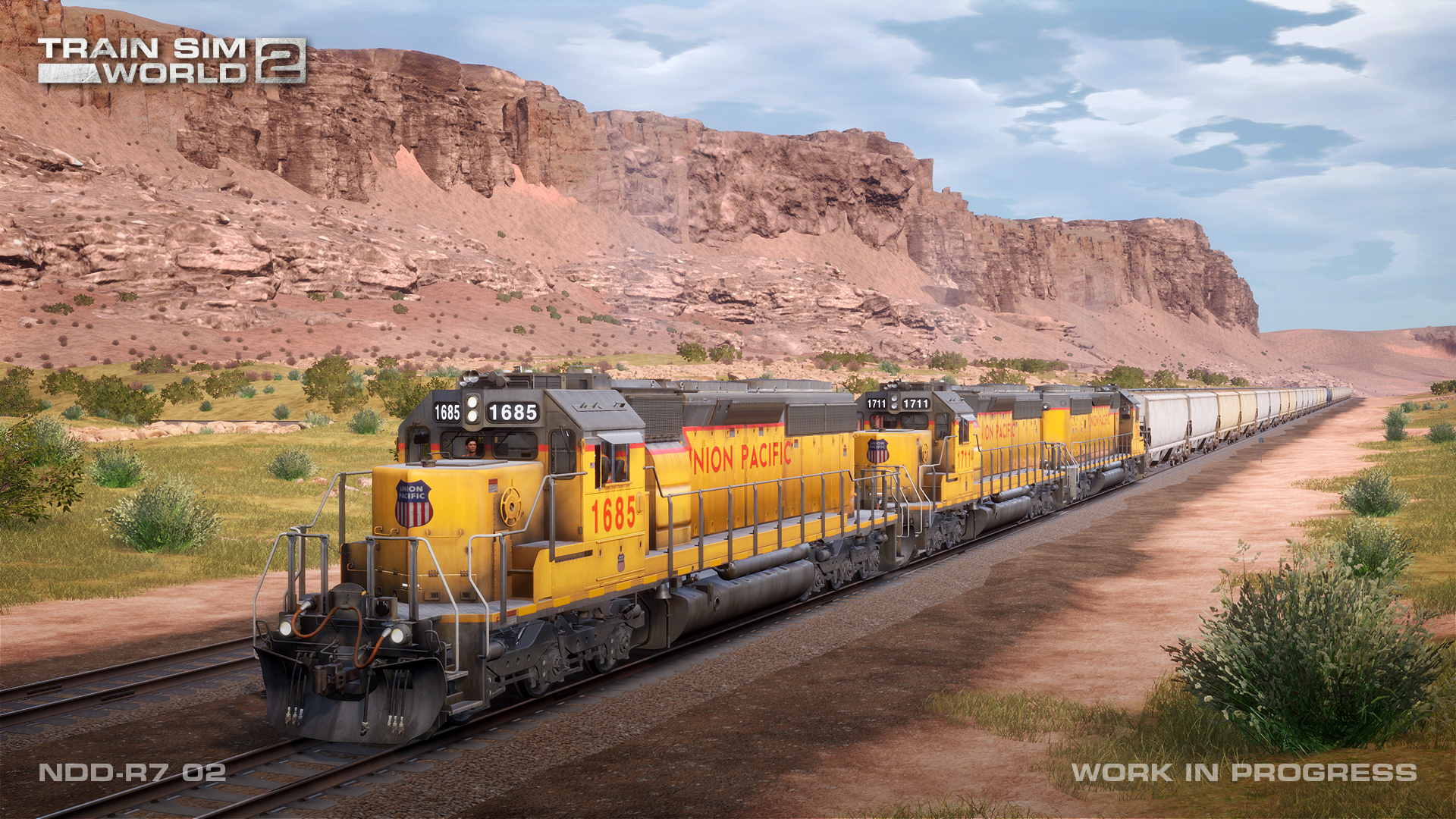 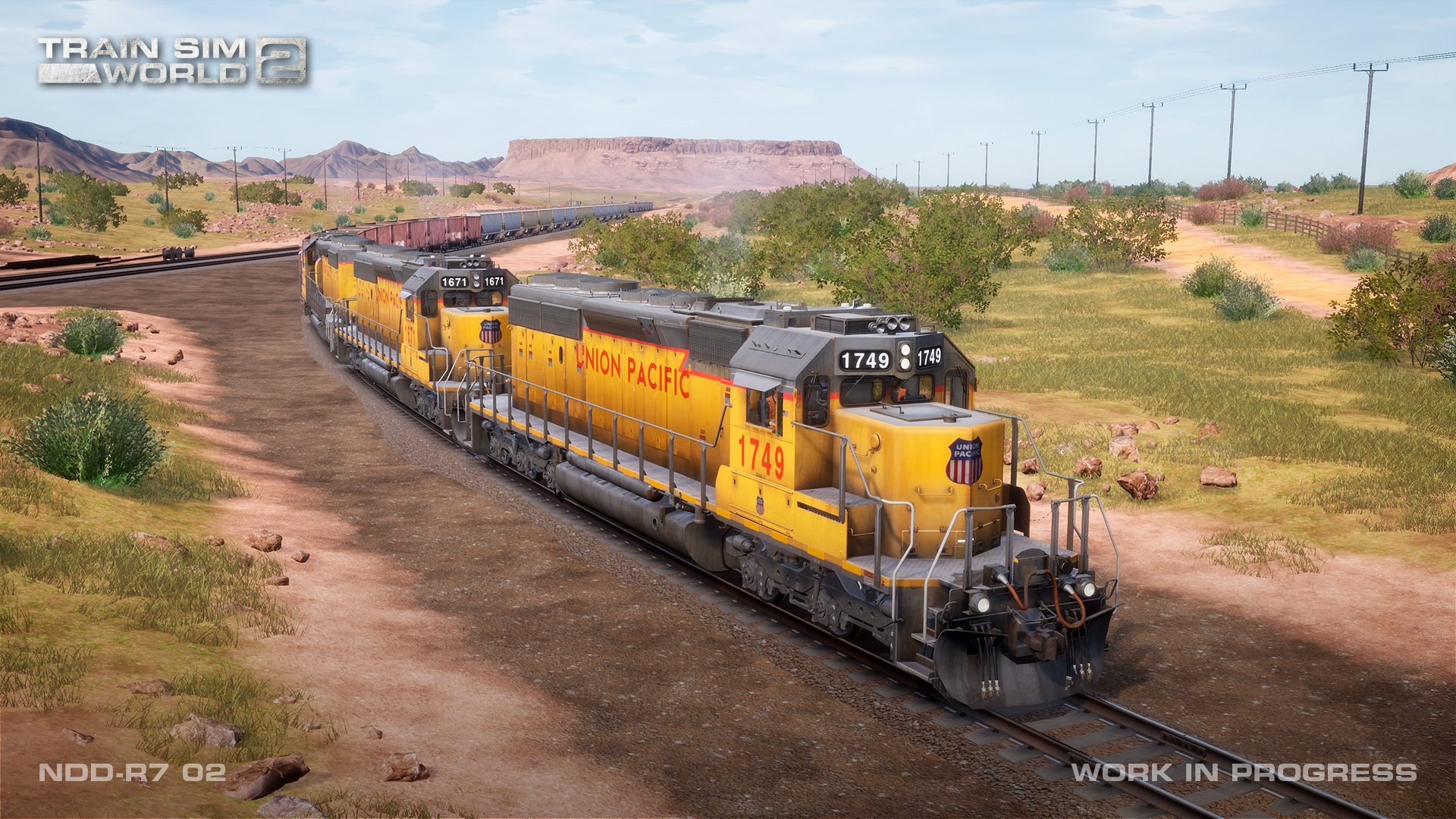 At Brendel (also known as Crescent City), the Cane Creek Branch connects with Union Pacific’s ex-D&RGW Green River Subdivision. UP SD40-2 1749 is leading a train off the main line and onto the branch at Brendel (above), then a short time later bridges a dry stream basin (below). 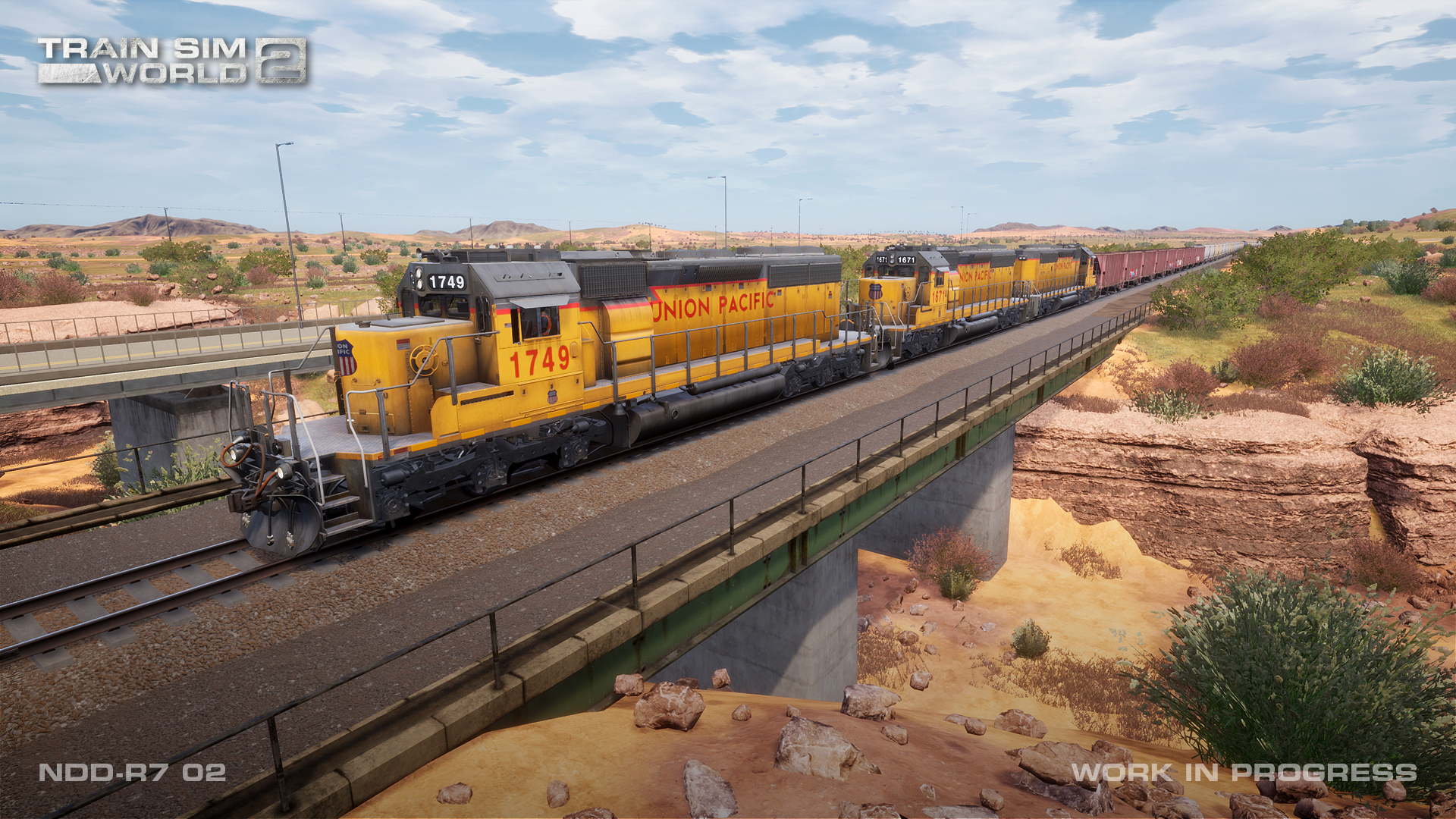 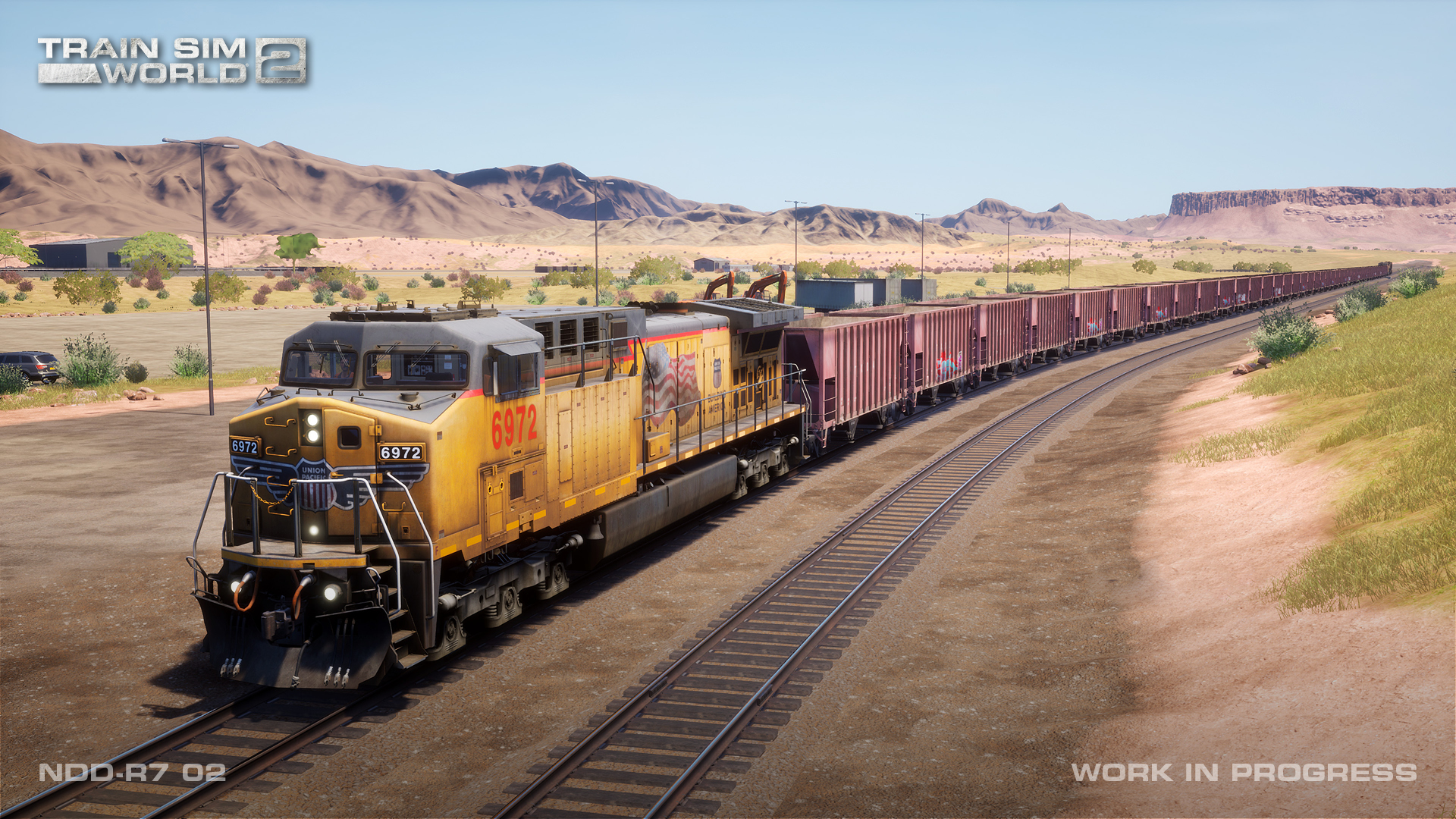 At Brendel, with UP GE AC4400CWs fore and aft, an empty consist for a “dirty dirt train” prepares to depart for Moab. Due to switching requirements at Moab, the dirt trains regularly run with units on each end. The upcoming Cane Creek Subdivision route will include a realistic selection of 12 scenarios and a challenging 24-hour timetable that will fully test your skills as an engineer! 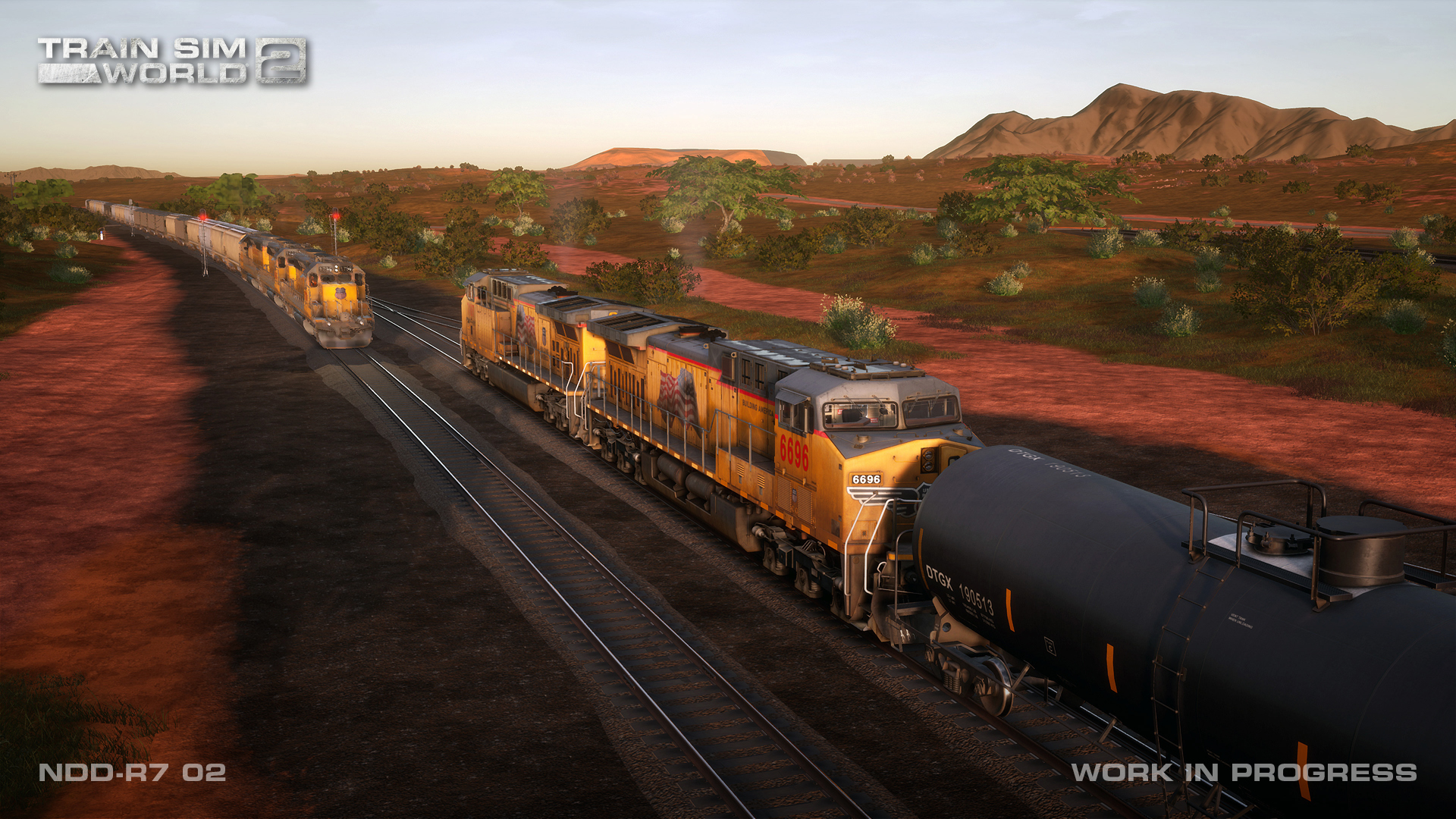 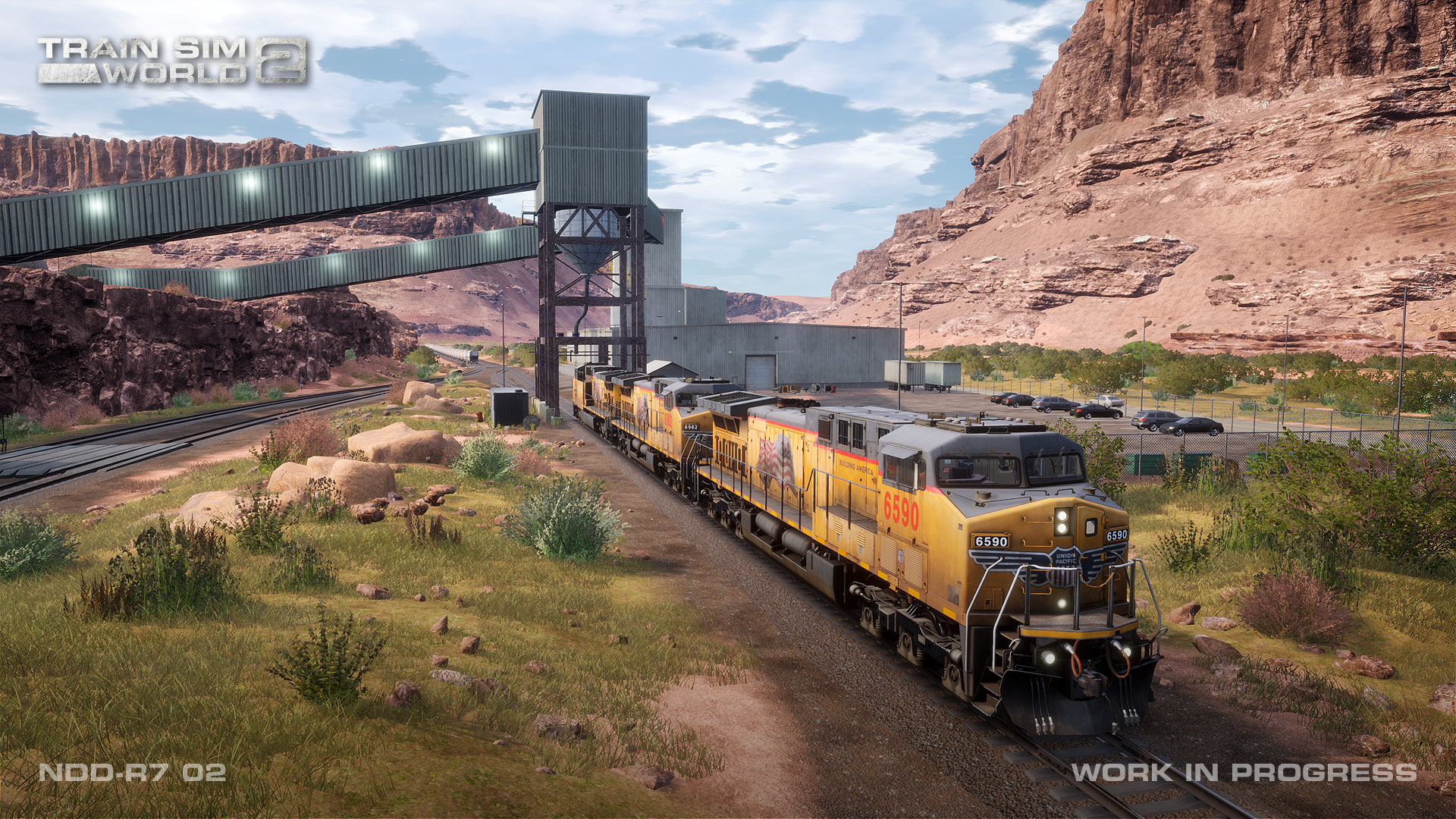 The upcoming Cane Creek Subdivision route for Train Sim World 2 will take you into the very heart of Utah’s legendary desert and canyon country in scenic settings that are awesomely realistic – and it’s coming soon, Make sure you're following @trainsimworld on Twitter and Facebook. to make sure you don't miss the next article!
Screenshots by Gary Dolzall.