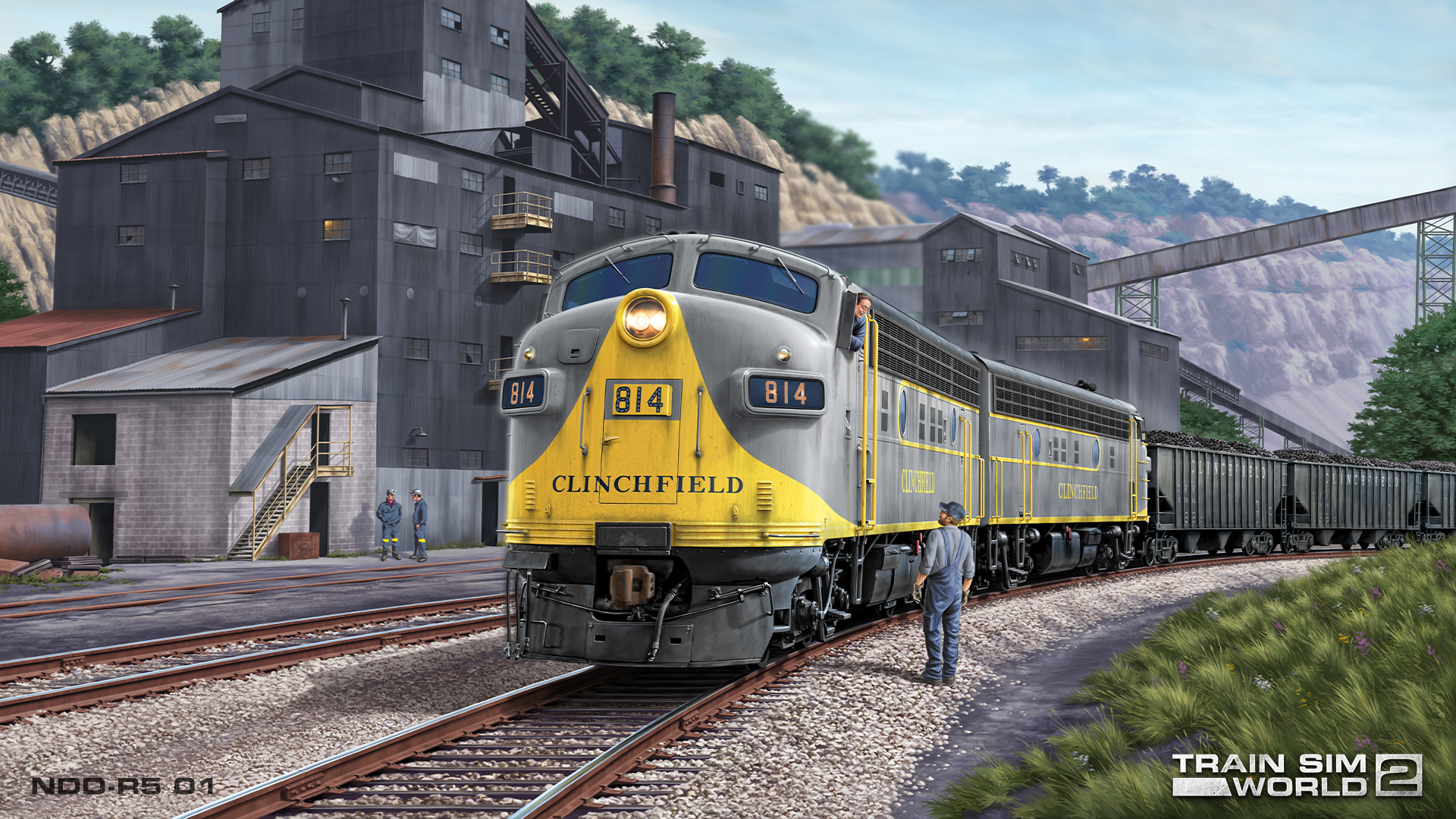 Callum would you like to introduce yourself and what you do here at Dovetail?

Callum: I’m an Assistant Technical Designer, I spend most of my days putting together the locomotives and the conversion between player interaction to locomotive interaction. I put in the safety systems and the warning devices and make sure they feed back to the player. I write what the player should do when they interact with them.

Can you tell us what is unique and special about the F7?

James: This is the oldest locomotive we have done so far. It is by far much earlier than anything we’ve done in the US previously. We have done British historical content but the earliest we have done before is the class 101 DMU which is form the early 50s. These date back to 1949.
It has been challenging creating something this old, the older something is the more difficult the research material is to get. In this case we are lucky that the F7 are really famous and people collect information about them.
Just looking at the production history of when they were made, there weren’t any uniform F7’s that were all the same. It was like ordering from a car dealer and being told “this is the 1949 model” and here is the option sheet and each railroad selected varying options.
We had a challenge trying to work out exactly what were in the F7’s by the 1970’s, the ones we are trying to depict 20 years after they had been built and they are a bit run down. They had been maintained by the local shop as well, there’s a lot of documentation but very little of it agrees across the board. 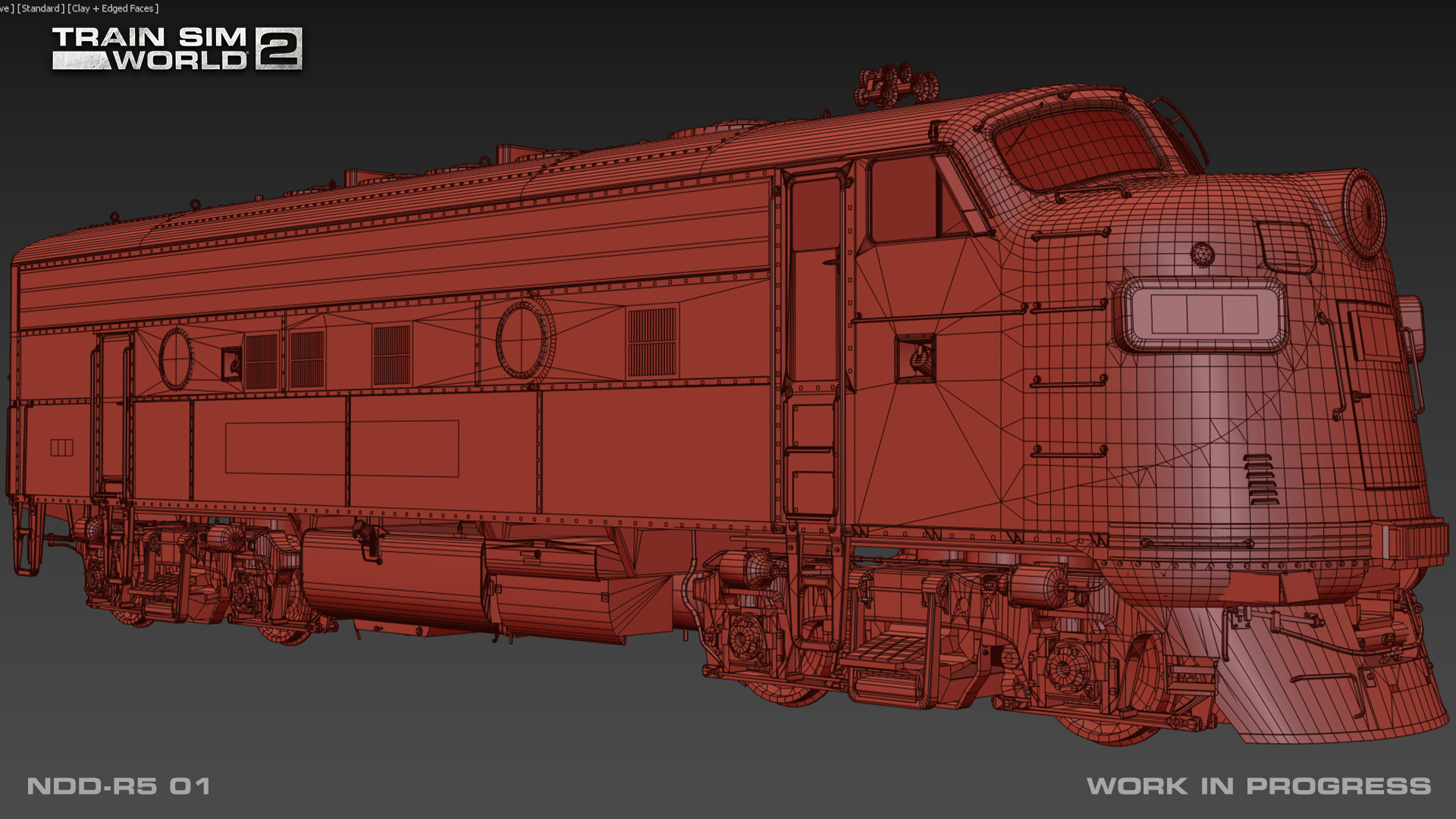 The railroad we are representing is famous for not cleaning anything, you can see that with how they reacted with their stock changes. At the point we are recreating they are 20-25 year old locomotives that are still in front line service, and hadn’t been pushed down at all.
They would take a set that was originally intended to be 4 vehicles together with 2 A units and 2 B units in the middle. And instead, they were using the A units heavily but the B units don’t have a cab and weren’t as flexible so they were traded in individually against new locomotives for credit with the manufacturer. They then put the A units together and just lashed them up however. We have seen pictures of 4 A units running nose to tail all facing the same way.

What is different with creating older locomotives compared to newer ones?

James: What’s different is the technology involved, everything is just a bit more agricultural all the way through and the personality of the loco is in showing all of that and making it apparent to the player. If it works the same as a modern sterile locomotive, it doesn’t have the personality it needs to for a loco of this era.
Callum: We’ve tried very hard to capture the feel of being in this time period, inside the cab of the F7 is quite a small enclosed cab and there’s not a lot of head room in places or space to move. It’s set very high in the loco and you have to climb up a long ladder to get into the cab. It feels very unique, especially when you stand up and move around, you experience that cramped feeling you would in real life. It should feel different to anything else we’ve created and it offers the player a new viewpoint.
When we compare it to the SD40 that it is paired with in this route, it’s going to be quite a different driving experience between the two. 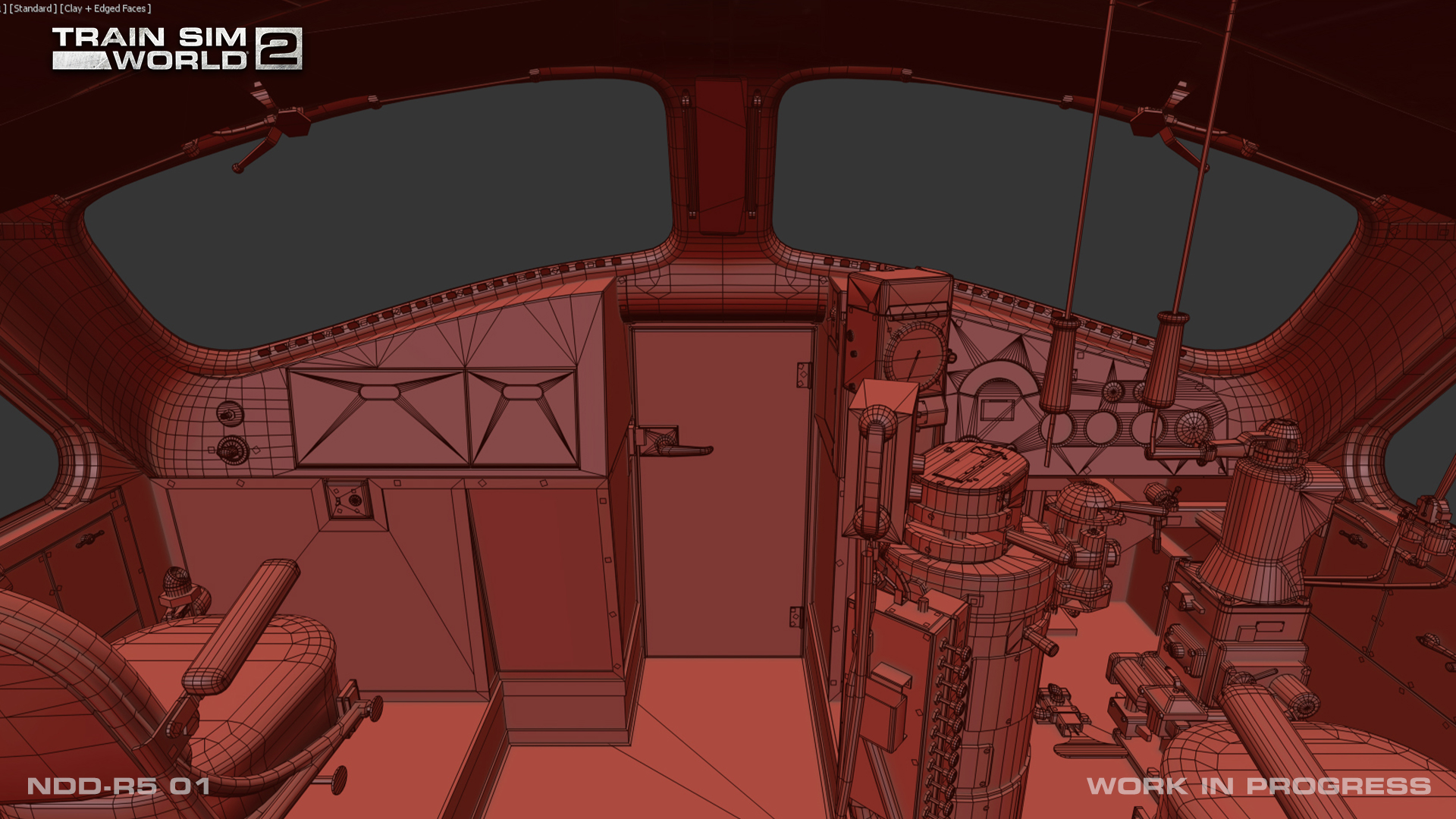 How did you create this loco? What steps to you take?

James: I am currently looking through a 260 page manual for the brake valve, there are so many variants of so many pieces to understand. I will then put them in to the computer using SimuGraph and get it to represent what I am reading. There are so many little interactions within it, with SimuGraph the idea is to represent the how, and then all of the other behaviors come out of the other end.

How do you collect the information you need to create this loco?

Callum: For an older locomotive like the F7 collecting information is difficult, they were made for nearly 50 Routes across America, Canada and even Mexico. Thay all have their own differences and throughout the years small refurbishments have been made.
At the start of a project like this I spend a few days researching, starting with a jumping off point like and engineman's manual. I then do more in depth searches for specific details, rollingstock forums can be a huge help as folks who used to drive these locos are active members and can shed light on the nuance of certain controls.
If we can't find what we are looking for, the team here at Dovetail and the members of our Discord and Beta forums all have great depth of knowledge on all thing's trains.
James: The older something is the more people put information online for fun, these locos are run typically by museums and heritage centers, and they tend to share what they have found, because it was difficult for them to find.
We also get academic projects using it because at this point some of these manuals are old enough to be out of copyright.
I spent ages trying to identify if the particular F7’s we are representing had dynamic brakes or not. So I was getting period photos of the route and staring at the digitised pixels at the top thinking “is that a dynamic brake fan or not”. I ended up coming to the conclusion that they have some of either. 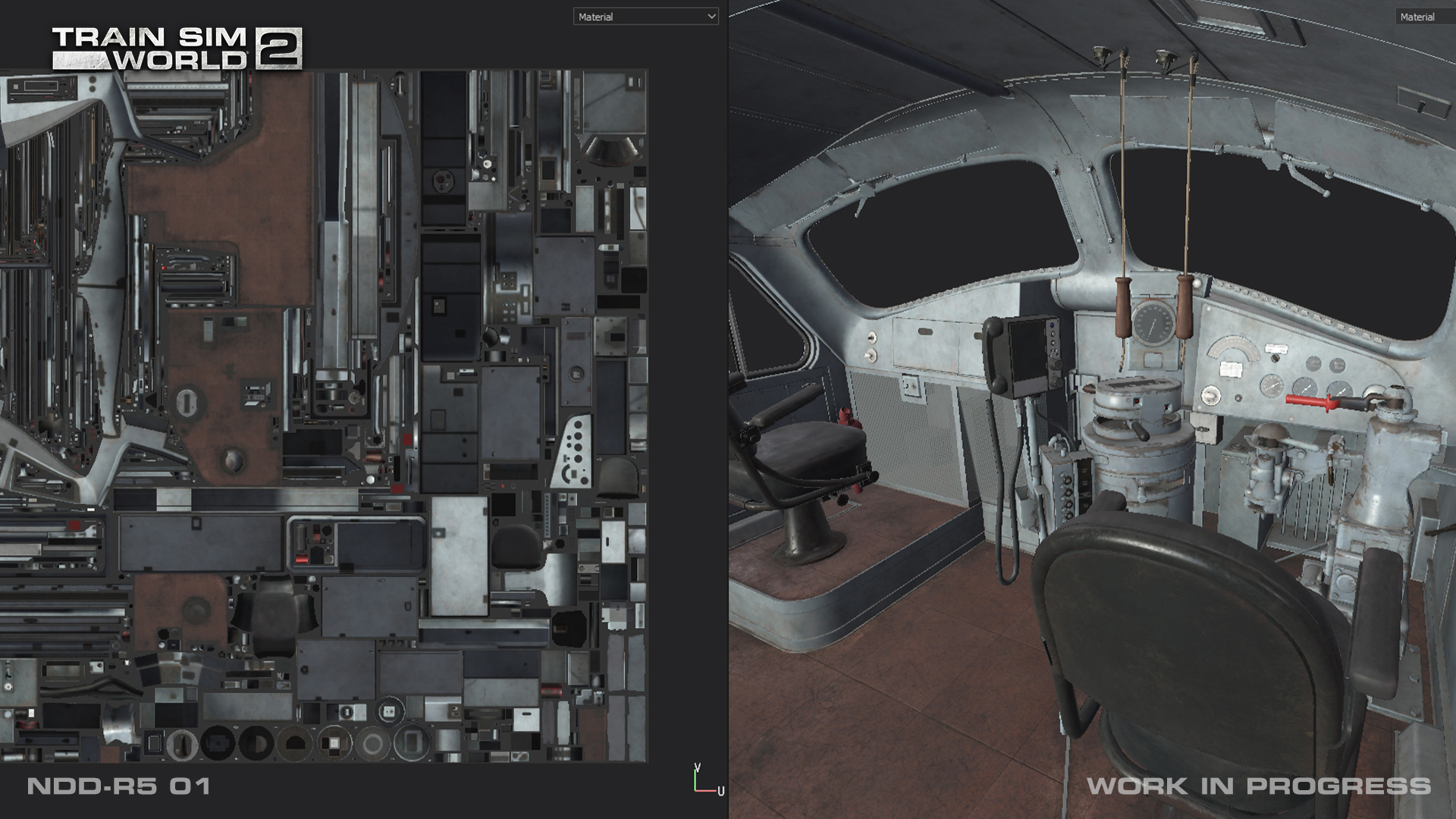 What have you enjoyed about creating this route?

Callum: From designing the transitional lever, which you don’t really see very much now. That has been fun to implement because it has a lot of different states that need to act at different times. You have to leave the throttle off for a good amount of time before the dynamic brake will kick in.
There are a lot of interlocking controls that are difficult to put together and master. When it comes to driving, there will be a nice challenge.
James: It’s a very different driving experience this has the old control stand from the very early days of EMD diesels. Everything we’ve done so far has had the sort of dash 2 controls from the mid 70’s. 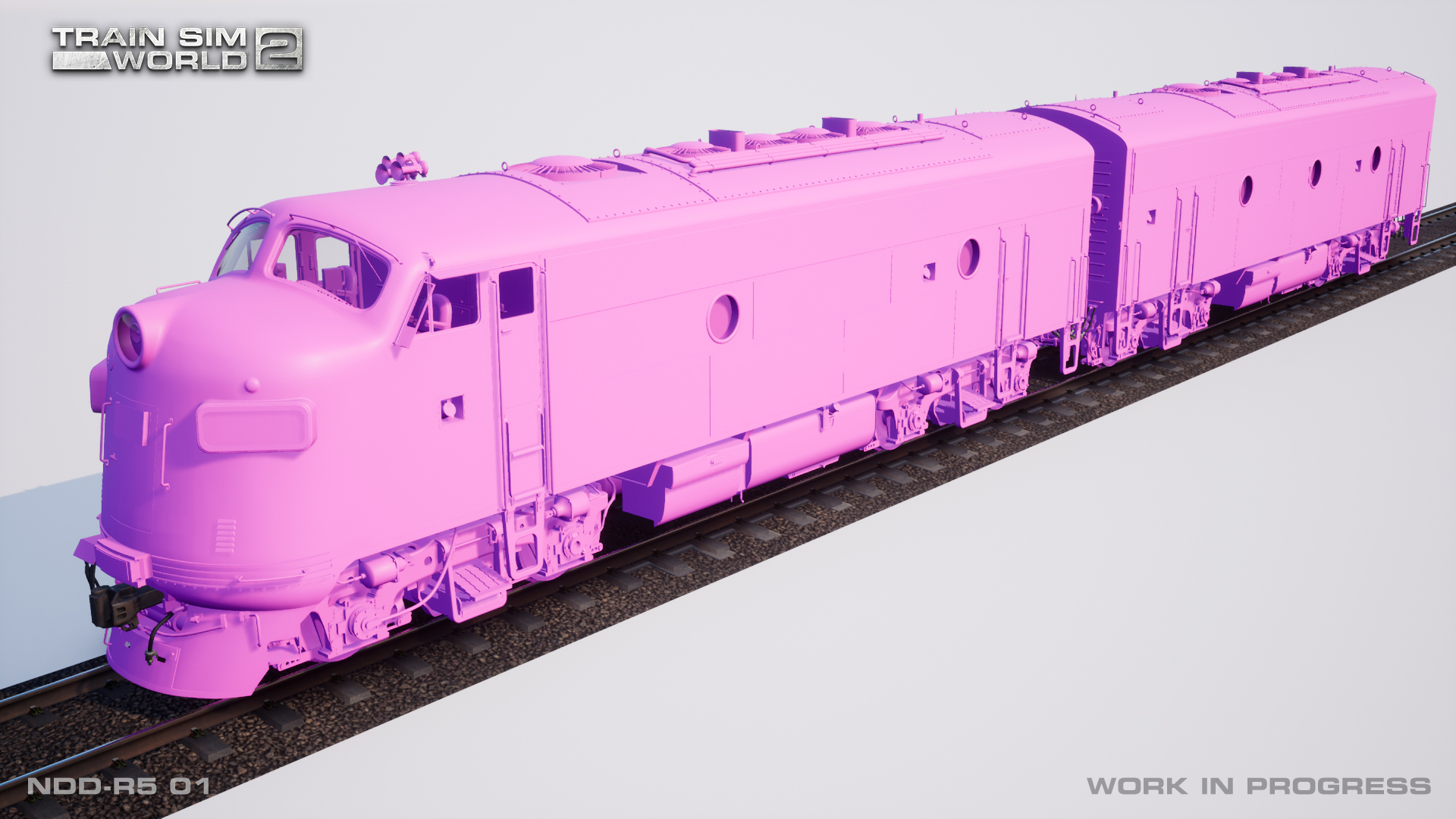 Clinchfield Railroad is coming soon to Train Sim World 2. Stay up to date with everything on this route by following @TrainSimWorld on Twitter and Facebook.