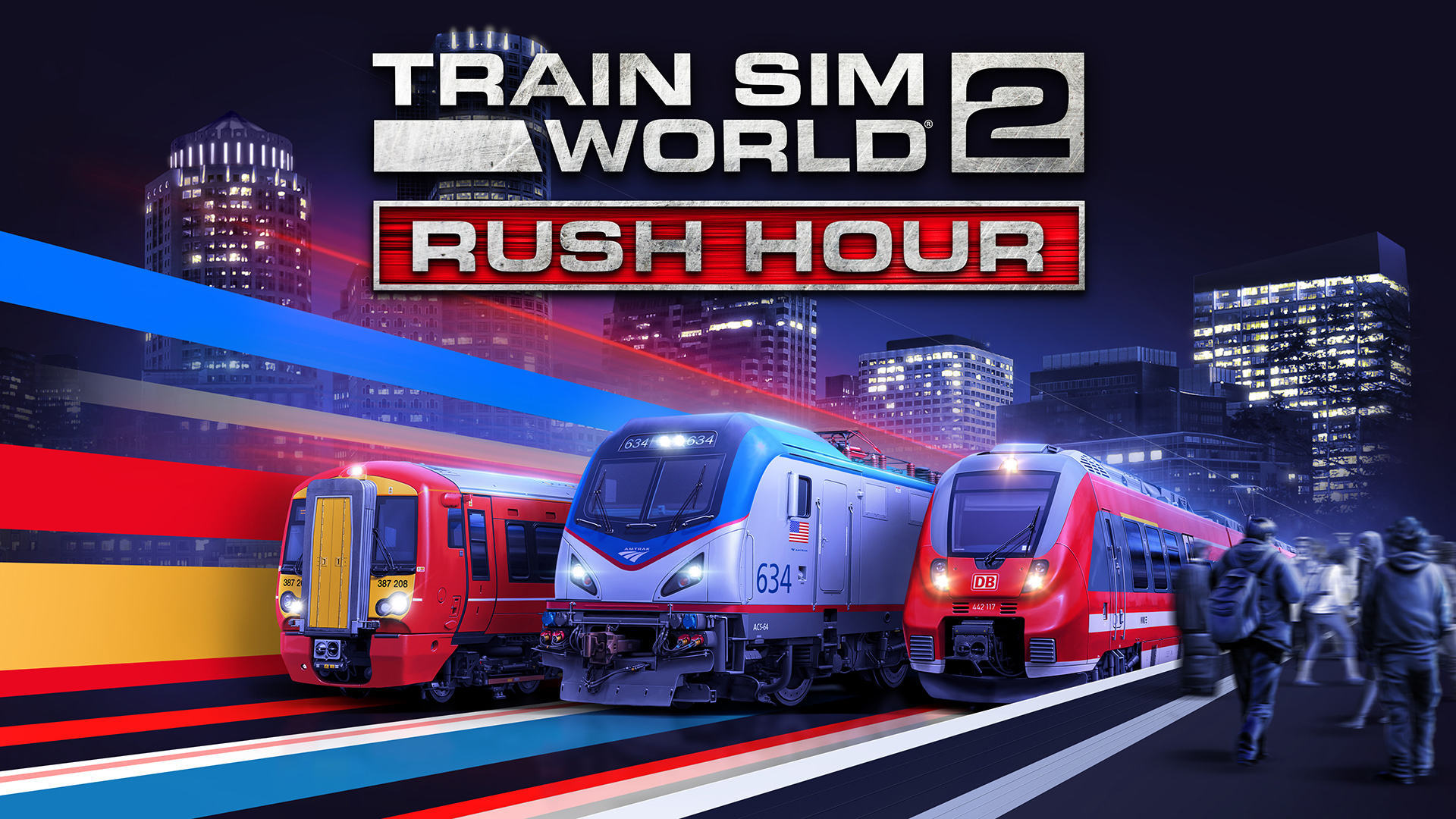 Find out more about how we have updated our passengers for Rush Hour, coming this Summer...

We sat down with Senior Producer Matt Peddlesden and Art Director Derek Siddle to find out more about what changes have been made to our passengers and what you can look forward to this Summer.

Why are passengers important to Train Sim World 2?

Derek: They are important because they are the cargo. Why do we have trains? To move people around, ultimately if we didn’t have people, we would be driving from point A to point B for no reason.
For Train Sim World 2 the other reason is of course to bring life and to make it feel like you are a part of a living breathing world and not just a dead environment. We want it to feel like you are going from one bustling place to another.

How have we approached recreating the feel of Rush Hour from a passenger point of view?

Matt: We wanted to go through the passenger technology that we had previously, and give it an overhaul. There’s a lot of things we wanted to update.
We took a look at the number of passengers, and consistent feedback we get, particularly on console is that there just aren’t enough passengers.
We planned to get that number up, but we can’t just dial the number up as we please, because that would severely impact the frame rate.
We have spent a lot of time reworking how passengers work which involves going into the depths of Unreal, understanding how it all works and optimising it so that it’s faster for what we are trying to do. Having improved the optimisation, that’s when we can dial the numbers up.
We have set different values for every platform, so that we can try and get the most out of every machine without holding one back because of another. 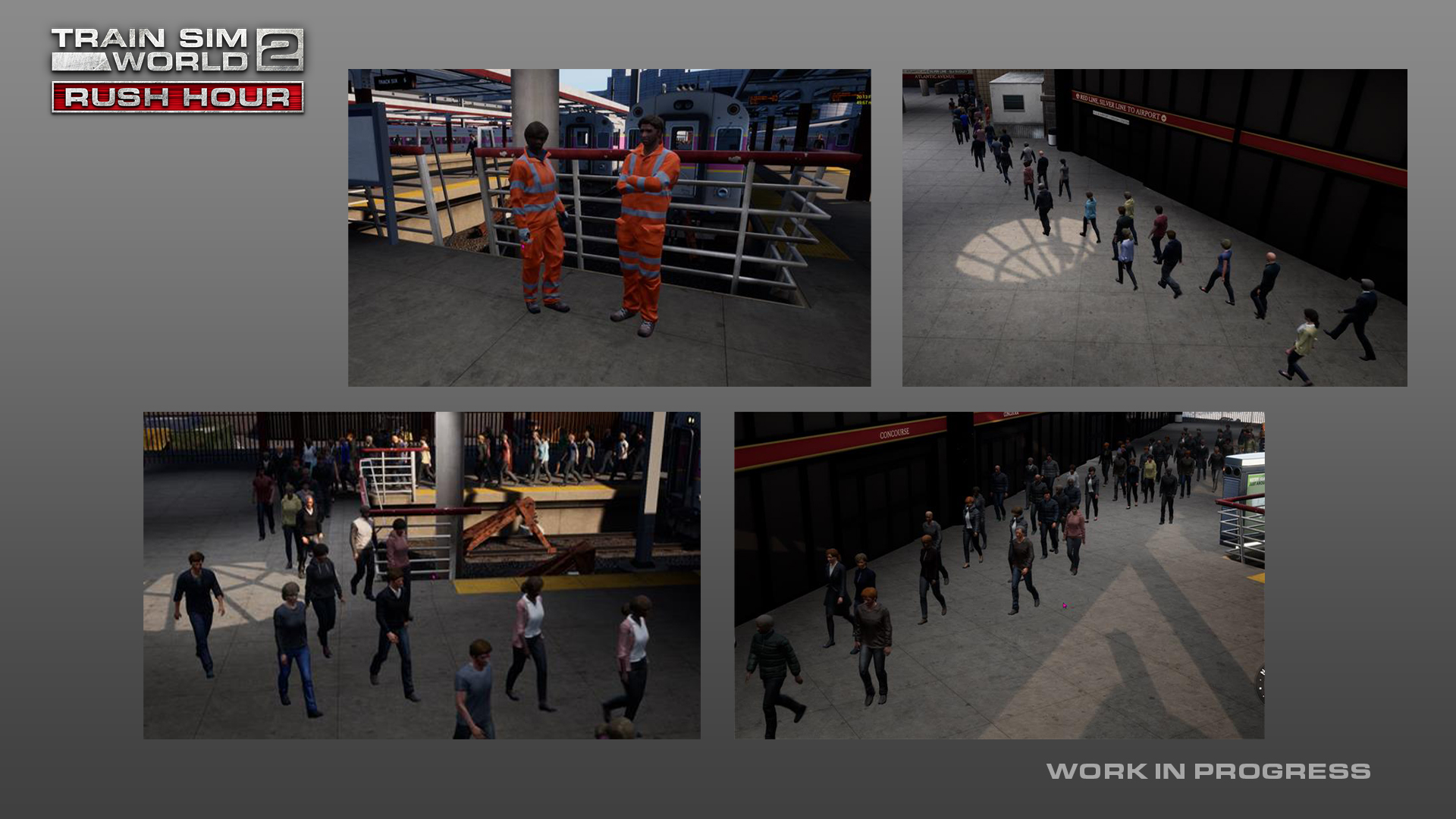 Derek: The key stations at either end of the route, the ones with the concourse like Victora and Brighton, they don’t want large numbers of people crowding the platforms waiting for their trains. This is part of the reason they won’t release the platform number until the train is ready to go and it’s safe to allow a large number of people on the platforms.
Generally, they won’t all wait on the platform for the train. What a lot of people do it stand in the waiting area, look at the boards and when the information comes up saying “Boarding at platform 8” for example, then everyone will start walking through the gates simultaneously and heading for their train. We are trying to recreate some of those behaviors.
We have tried to use the number of passengers that we can use without creating performance issues in a sensible way to make it look as full as possible and not waste valuable characters in places where they won’t be noticed.
Matt: We also looked at behaviors of passengers – when they spawn in, how long does it take them to get to the platform.
On some routes you find you come into the platform and it’s empty and when you leave, it’s still empty. What happens is, had you stayed around the platform for another 30 seconds the passengers would have started arriving. This is because they started spawning at some distant location and were walking down the corridors to get to the platform, which isn’t very good.
The idea was to create that sense of life so that if you were walking down the platform you wouldn’t just see passengers popping into existence. But this doesn’t help if you are only at the station for 20 seconds.
In Rush Hour we have pre-populated the platforms with passengers, so when you turn up, they should already be there waiting. We’ve really thought about how we set out the volumes on the platforms. The passengers used to cluster together in almost cubes, we have changed it now so that they are more spread out and it feels more natural.

Will there be any changes to how passengers move?

Matt: The passengers used to sort of float up the stairs, in NavMesh the ramp is just a diagonal, even if it has steps in reality. They would do the walking animation while floating.
We have also adjusted some parameters that mean passengers on platforms should now walk in a more natural fashion rather than in an exact "shortest path" line to their target point.
We have been able to switch them to a step walking animation now. The difference is noticeable when you look at the heads. Before you would see a row of heads like they were on an escalator whereas now all the heads bob as they go up stairs. It’s subtle but it makes a big difference to how it looks. 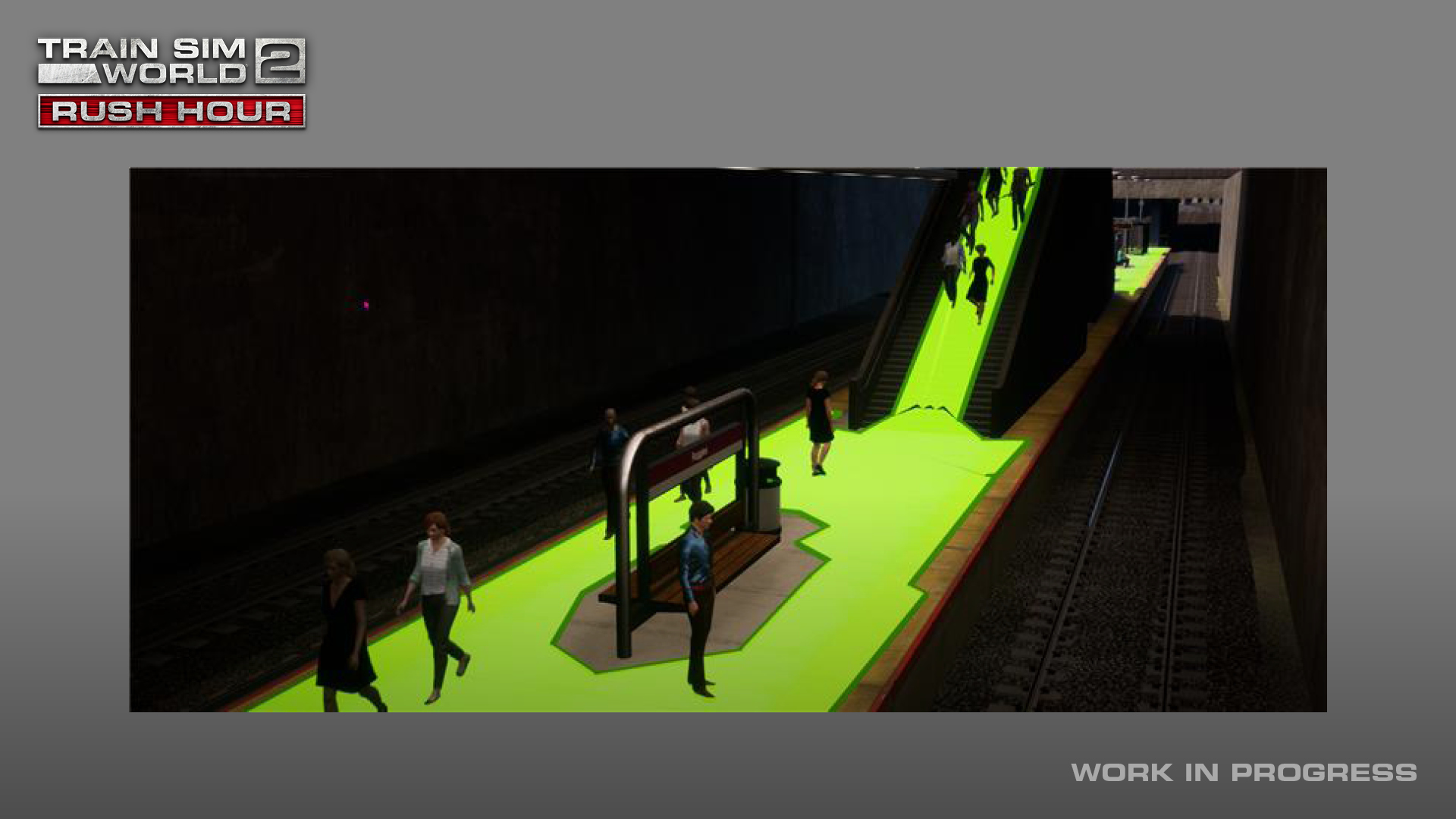 Will there be a notable difference between the regular time of day and peak time of day?

Matt: That has actually always been there, but it’s been difficult to see because of the lower volumes of passengers.
If you are on a console and you had a limit of 20, the difference between times of day is barely noticeable, particularly if you spread the passengers out across multiple platforms.
By increasing the numbers, the difference between peak and off peak does become more readily apparent.
Each of the stations has its own spawn density curves, on one station Rush Hour might mean there are now 10 people on the platform and on another station, it might mean 200 people spawn. The system has quite a lot of flexibility and we are finally able to leverage it because we can get the raw number limits much higher. We are also able to put more passengers on the trains themselves, which means you will see a bigger impact when a train pulls into the station and a sea of people get off.

What has been done to change the visual appearance of passengers?

Derek: There are a number of things that we have done. One of the first things is add a height factor, the skeleton can be 5% bigger or 5% smaller so what we don’t have is a flat line of heads all at the same height. The difference is very subtle but this avoids some really strange proportions.
We have added palletisation to the outfits of the existing characters, that means for example, in the past if someone was wearing a white shirt, it would always remain a white shirt. What we have done now is that the shirt can become any colour, and if they are wearing a tie, that can also change colour. This can create some interesting combinations. As you can imagine we have had some fun with that. 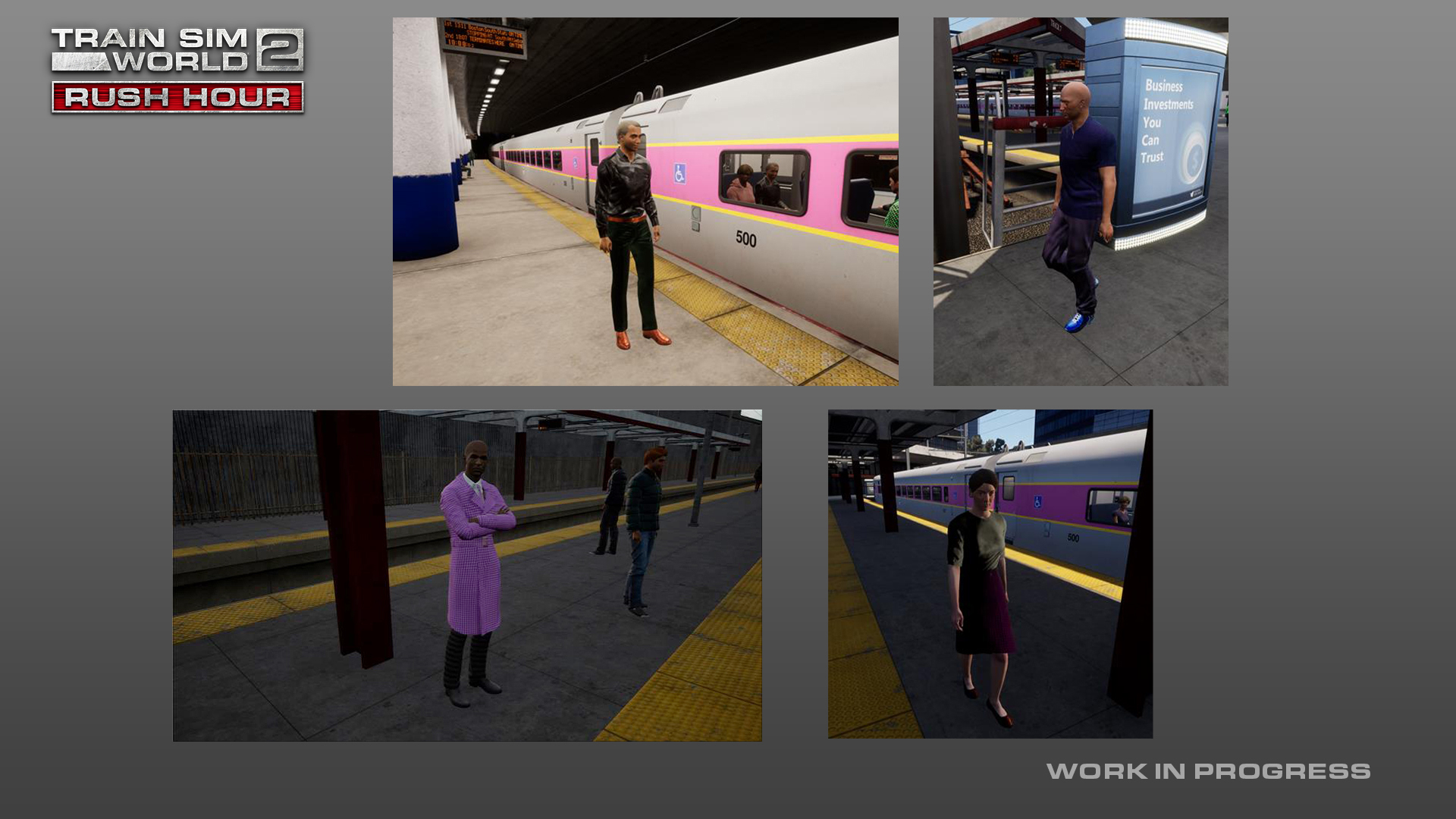 One of the issues we are trying to combat it that you have seen this twin person many times. There is a random hairstyle they will wear, but also what clothes they will be wearing. Now if you do see someone in the same style clothes, they will at least be a different colour.
We have also introduced another layer which includes a pattern, this means if someone was wearing a pink shirt previously, they could now be wearing a pink checkered shirt, or a pinstripe shirt. This one outfit now has many different colours with many different patterns.
We are also adding extra outfits to the scene. We have included 4 masculine outfits and 4 feminine outfits. Two for lower temperatures and two for warmer temperatures. Below a certain temperature, roughly 12 degrees, they will all be wearing their winter outfits. Between 12 and 18 they will have a mix, and above 18 they will have clothes for warmer weather. 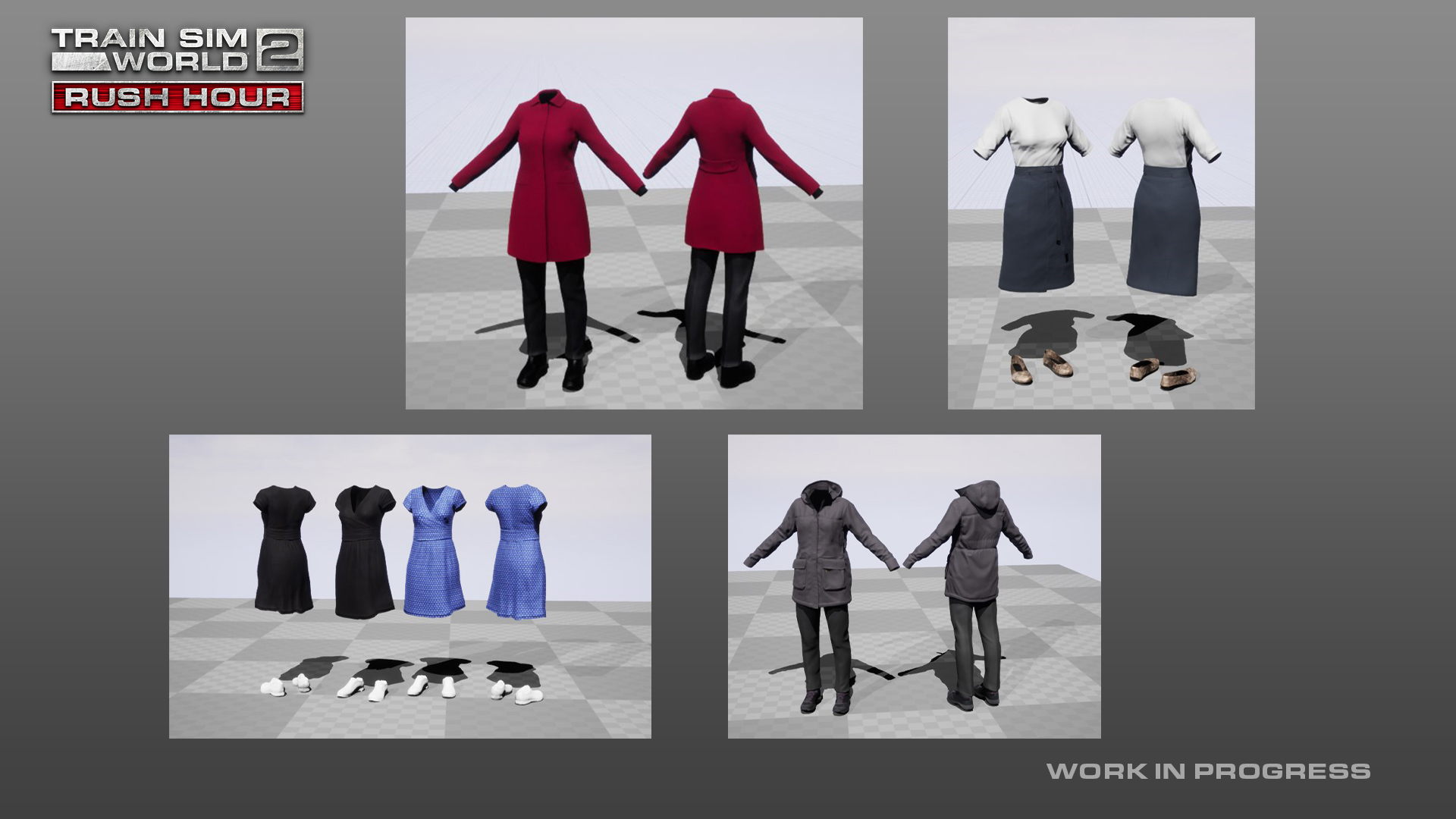 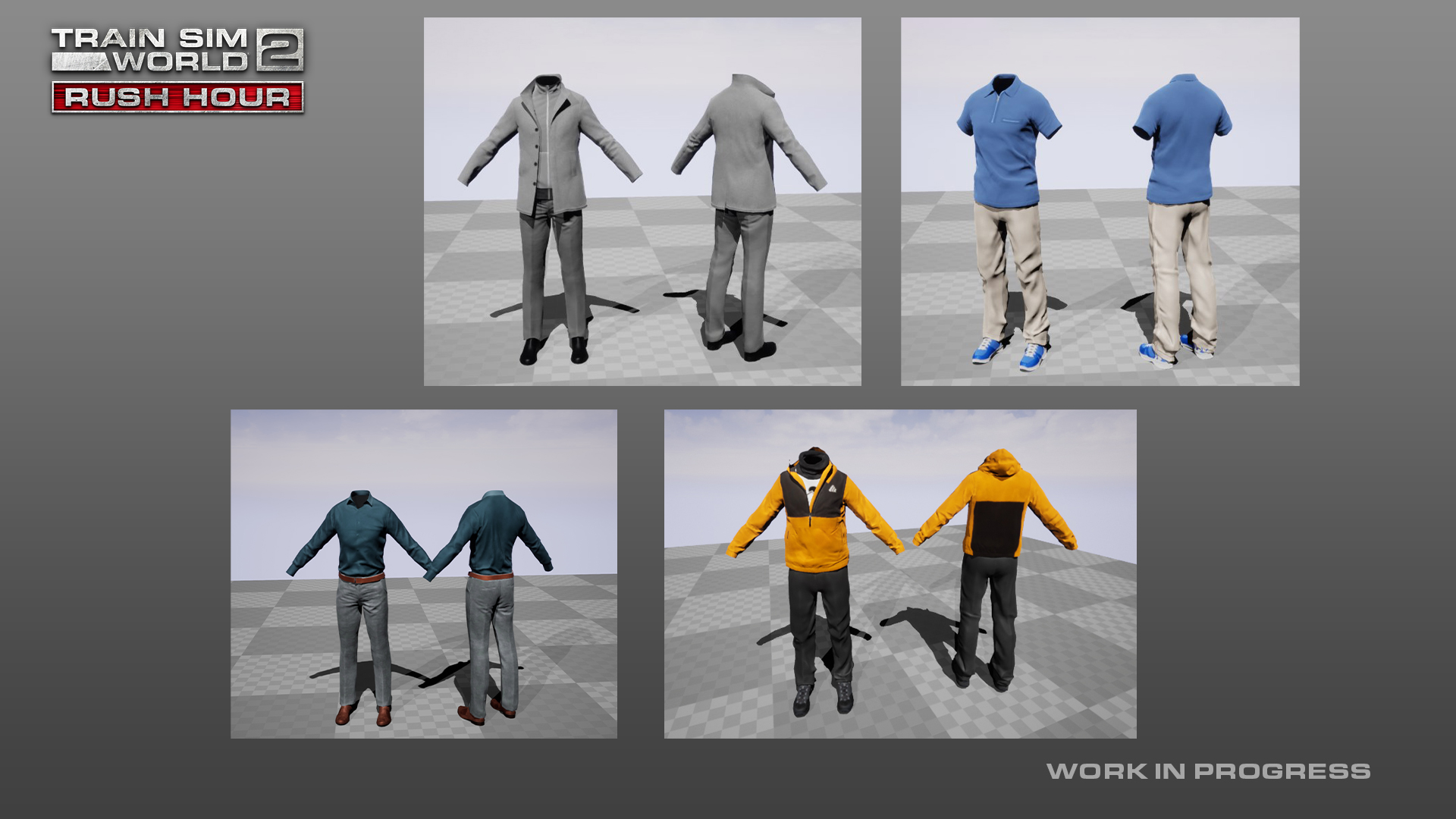 What else can players look forward to with the new passengers?

Derek: We are trying to set up little scenes where we populate platforms with what we call dioramas. Essentially, it’s a small group of people that will be on a platform, that will always be on the platform but won’t move. Their train so to speak will never turn up. We want to add more of these to platforms to fill out stations a bit more with interesting scenes of people or inanimate objects.
Matt: We can spawn and de-spawn these dioramas, but never in front of the player. If you are going up and down London-Brighton for example, when you get to Gatwick on your Southbound journey you might see a combination of these dioramas and then when you come back at a different time of day, they might not be there anymore.
If the weather changes during this time, you could return to find them wearing different clothing.
This opens up a lot of potential for what we can do. For Rush Hour they will start by being very simple. The dioramas are created by using more traditional animation and character handling.
Creating a scene with baggage and someone sitting down reading a newspaper vs trying to create a system where someone can bring baggage onto the platform, sit down and pull out a newspaper, which would be a nightmare. This allows us to be a lot more creative with what happens on the platforms using this system.
Derek: We have a lot of ideas for interesting things we can do with these scenes.
Be in control with Train Sim World 2: Rush Hour this Summer. The new passengers feature will be available on the Boston Sprinter, Nahverkehr Dresden and London Commuter routes as well as Bakerloo Line and Schnellfahrstrecke Köln-Aachen from the original game. Stay up to date on all of the news on Train Sim World 2 by following @trainsimworld on Facebook and Twitter.