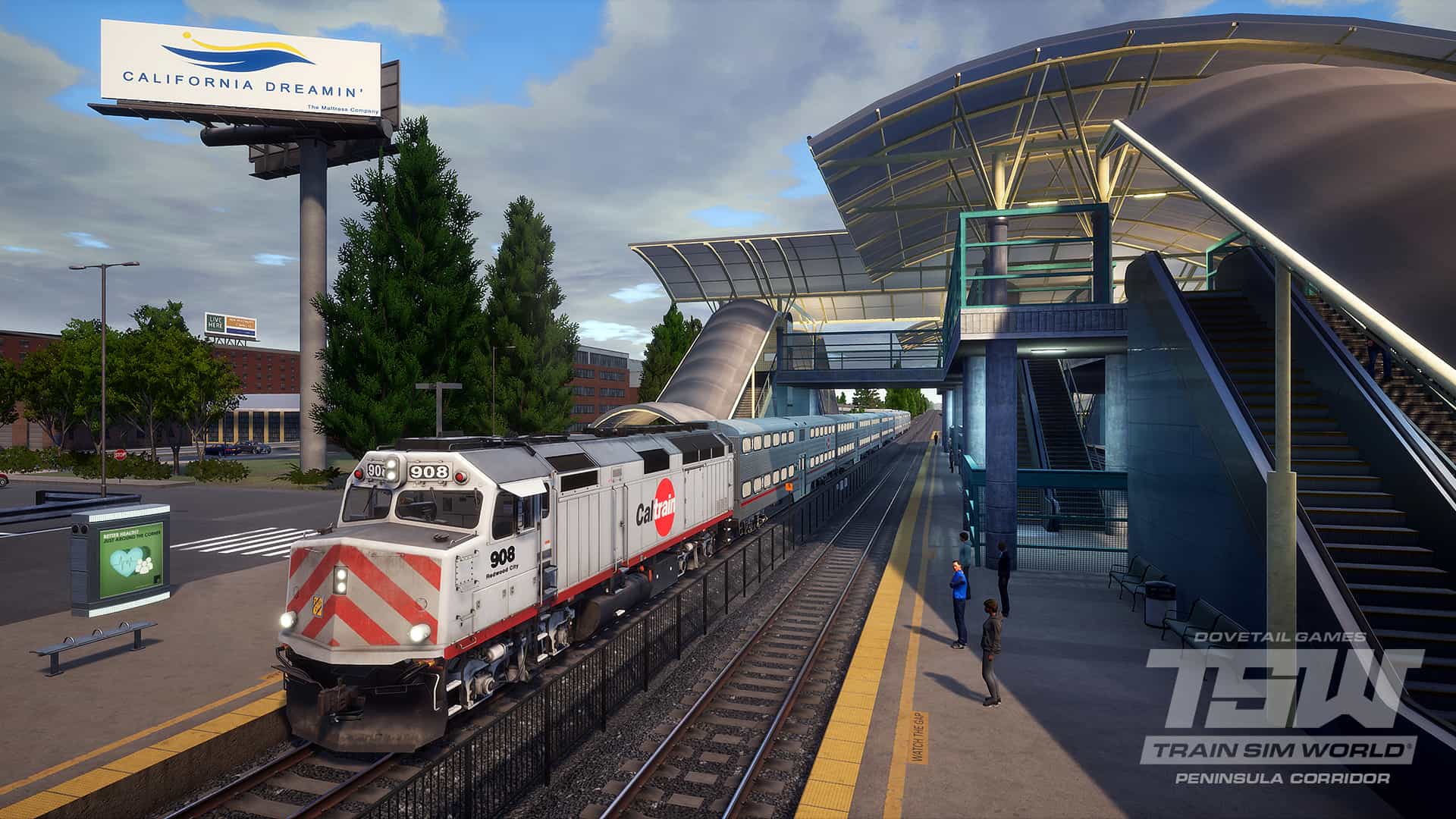 California’s captivating Peninsula Corridor, home to Caltrain commuters and Union Pacific freights, is coming soon to Train Sim World!
Coming soon to Train Sim World is the captivating commuter rail route operated by Caltrain along California’s vibrant and bustling San Francisco Peninsula! Train Sim World’s upcoming Peninsula Corridor Route will extend between San Francisco’s busy 4th & King Street station and stylish San Jose Diridon station, serving 24 intermediate Caltrain stations along the multi-track route’s 47-mile length. And in addition to Caltrain’s commuter operations, this new TSW route will deliver the opportunity to climb aboard for challenging Union Pacific freight duties along the scenic Peninsula.
The railroad that today stretches down the San Francisco Peninsula was formed in 1860 as the San Francisco and San Jose Railroad, was completed south to San Jose in 1864, and in 1870 was absorbed into the Southern Pacific. For more than a century, giant SP operated what became known as its “Peninsula Commute Service,” and the line serving the beautiful “City by the Bay” earned iconic status among railroaders and commuters.
By the late 1970s the “Peninsula Commute Service” was enduring operating losses and Southern Pacific sought relief. As an initial step, in 1980 the California Department of Transportation assumed control and provided funding for the route while introducing a new “Caltrain” branding for the commuter services, but with SP still operating the line as a contractor. A decade later, via the creation of the Peninsula Corridor Joint Powers Board, Caltrain assumed full commuter operations between San Francisco and San Jose. The California Department of Transportation and Caltrain took its first major step in new fleet development in 1985 with the acquisition of Nippon Sharyo gallery commuter cars and Electro-Motive F40PH-2 diesel-electric locomotives.
In serving San Francisco and California’s vibrant “Silicon Valley,” Caltrain has since its formation emerged as one of America’s most vital, progressive, and dynamic commuter railroads. Over its length (limited services extend south from San Jose to Gilroy), Caltrain today operates approximately 100 trains per day during the work week to serve an average of more than 63,000 commuters each weekday!
Southern Pacific, which retained operating rights for freight traffic on the Peninsula Corridor when Caltrain was formed, was merged into Union Pacific in 1996, and today the UP continues to serve the route with freight and local services centered from South San Francisco Yard.
Caltrain’s original purchase of Nippon-Sharyo cars in 1985-86 consisted of 73 cars (21 cab cars and 52 trailers) and the railroad has since expanded its fleet equipment to more than 90 such cars. The cab cars, equipped with operating controls, provide Caltrain the ability to operate its trains in “push-pull” fashion. The Nippon Sharyo trailers can seat up to 148 passengers.
Caltrain’s original purchase of F40PH-2s in 1985 was for 18 locomotives and two sister units joined the roster in 1987. Fifteen of these 3,200-horsepower locomotives have since been upgraded with separate Caterpillar 6-cylinder-powered HEP generators and reclassified as F40PH-2CAT locomotives. Caltrain’s current equipment fleet also includes three F40PH-2C locomotives purchased in 1998 as well as flashy MPI MP36PH-3C and Bombardier commuter equipment acquired in 2003. To maintain its fleet, in 2007 Caltrain opened its modern, 20-acre Centralized Equipment Maintenance & Operations Facility (CEMOF) facility in San Jose.
Train Sim World’s Peninsula Corridor Route is coming soon and promises fast-paced American railroading at its contemporary and action-packed best. Along with the challenges of serving a total of 26 Caltrain commuter rail stations, the line will feature fast-running (up to 79-mph) along the route’s signaled, multi-track mainline. Exactingly re-created for the TSW: Peninsula Corridor Route will be Caltrain’s workhorse F40PH-2CAT diesel and stylish Nippon-Sharyo bi-level gallery cab car and trailer. To keep tonnage moving, the route will also feature Union Pacific’s versatile and venerable Electro-Motive GP38-2 diesel. To allow you to experience and enjoy the busy and scenic Peninsula Corridor right away, this latest TSW route will feature tutorials for each equipment type, a selection of challenging commuter and freight scenarios, and extensive 24-hour timetabled services!
Ready for “California Dreamin’, railroad-style? With Train Sim World’s upcoming Peninsula Corridor Route, extraordinary contemporary commuter and freight American railroading is on the way! – Gary Dolzall
Train Sim World’s Peninsula Corridor will be available both as a standalone route, and as part of the Digital Deluxe Edition of Train Sim World 2020 on August 15th 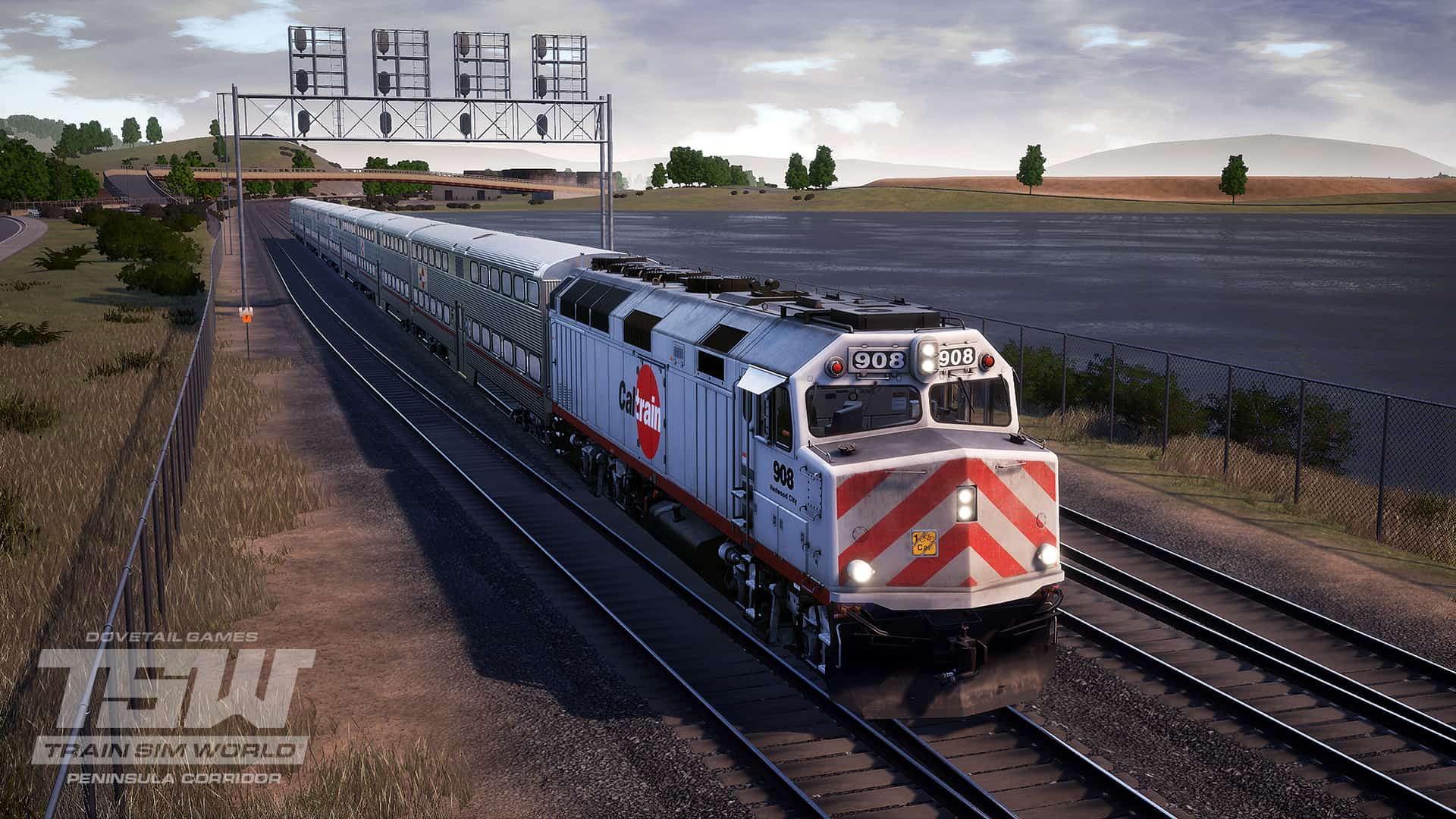 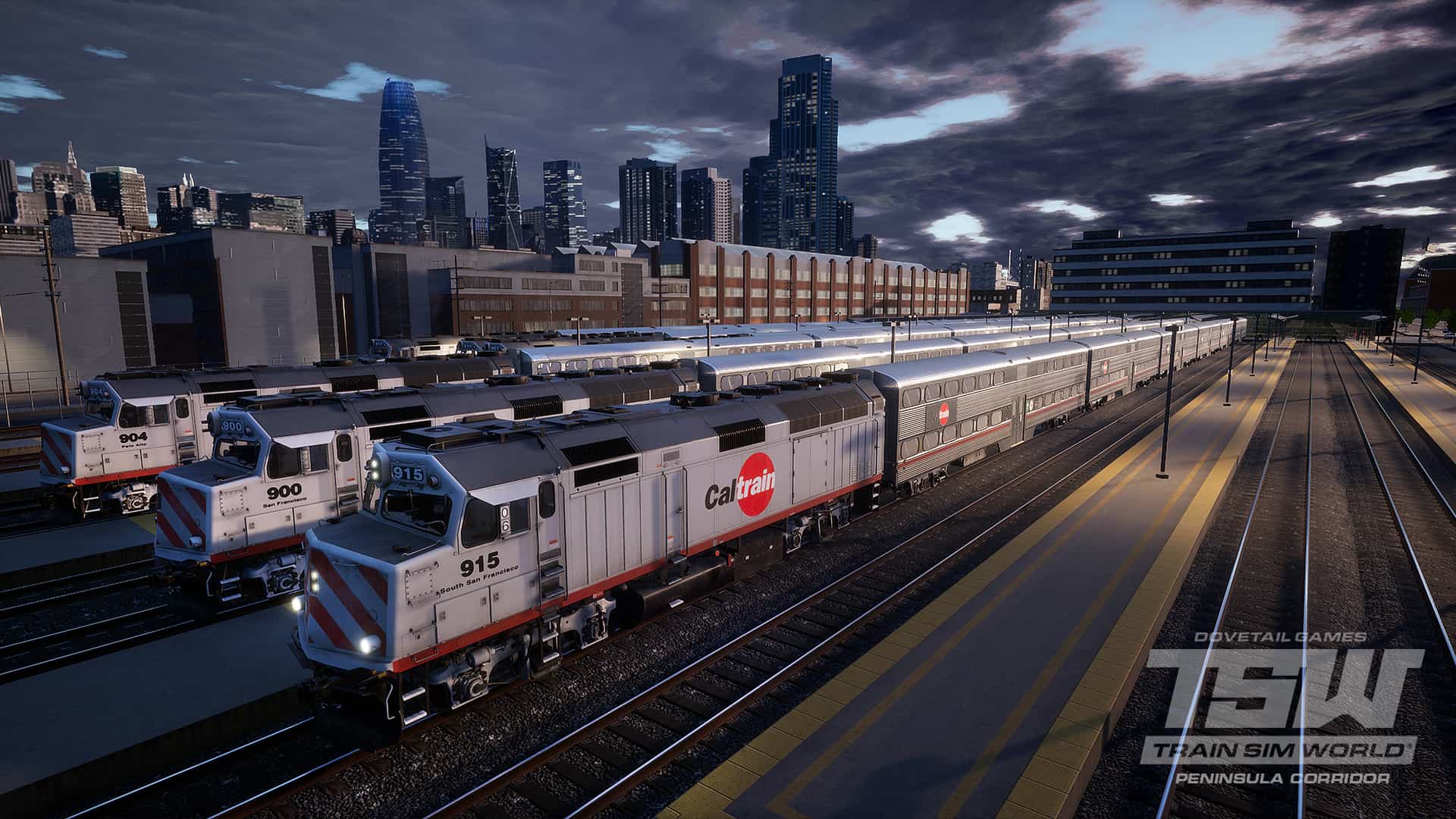 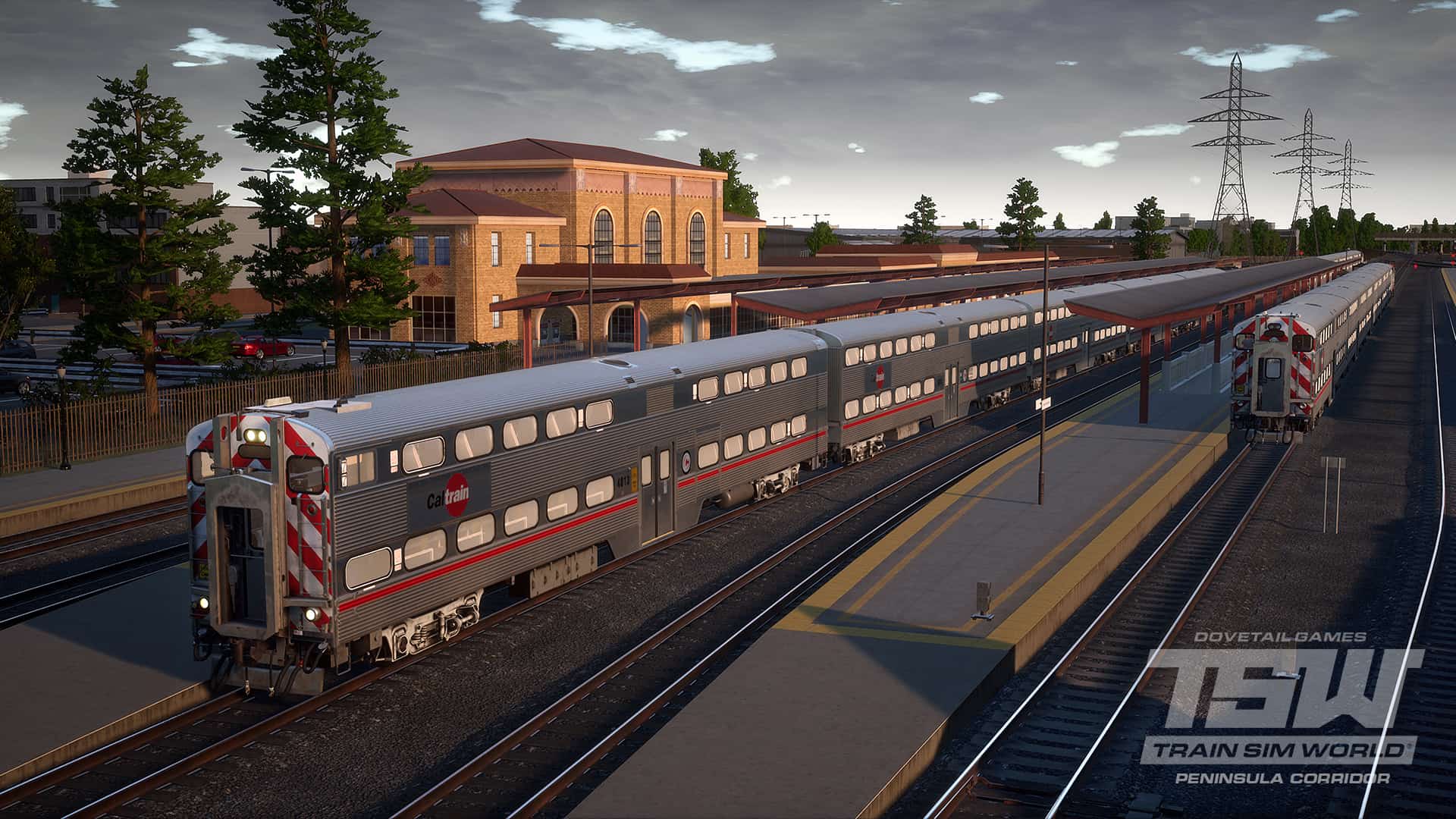 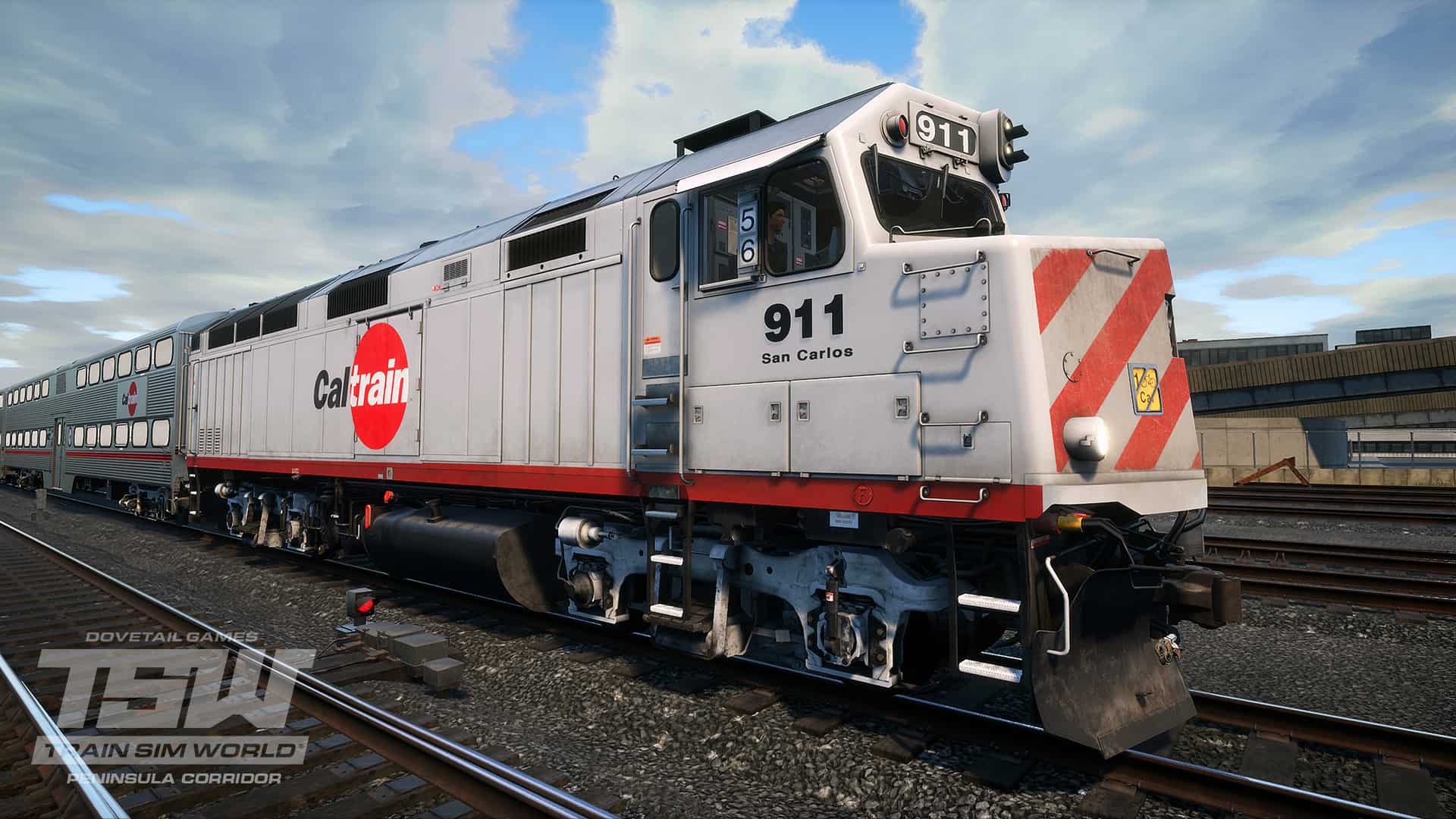 The TSW: Peninsula Corridor Route will feature Caltrain’s workhorse EMD F40PH-2CAT diesel (above) and stylish Nippon-Sharyo bi-level gallery commuter cars (below). Caltrain operates 15 F40PH-2CAT diesels which were purchased in 1985-87 as F40PH-2 locomotives and since modified with separate Caterpillar 6-cylinder-powered HEP generators. Caltrain calls upon more than 90 Nippon-Sharyo cars including trailers and cab cars which enable the railroad to operate its trains in “push-pull” fashion. 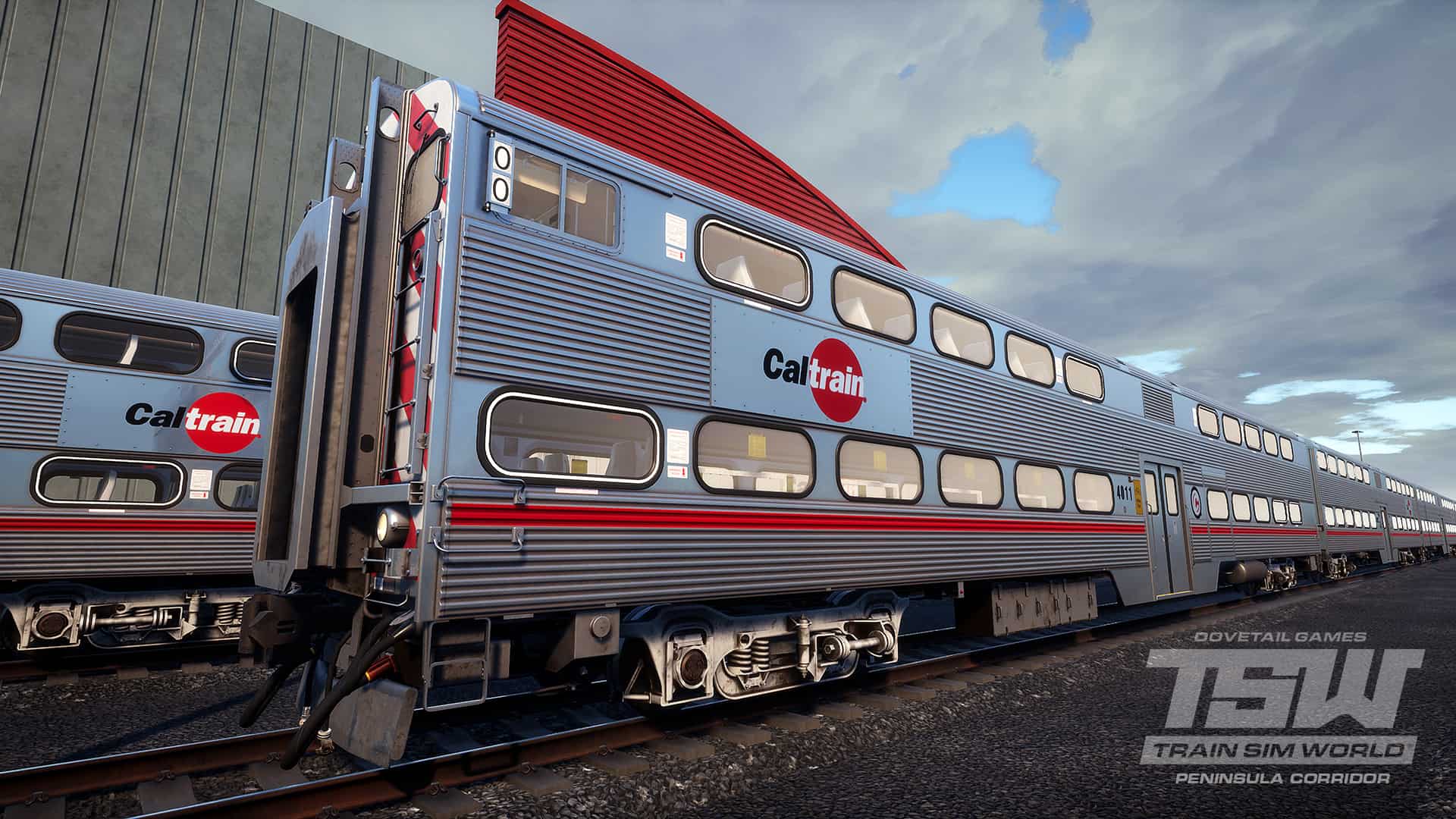 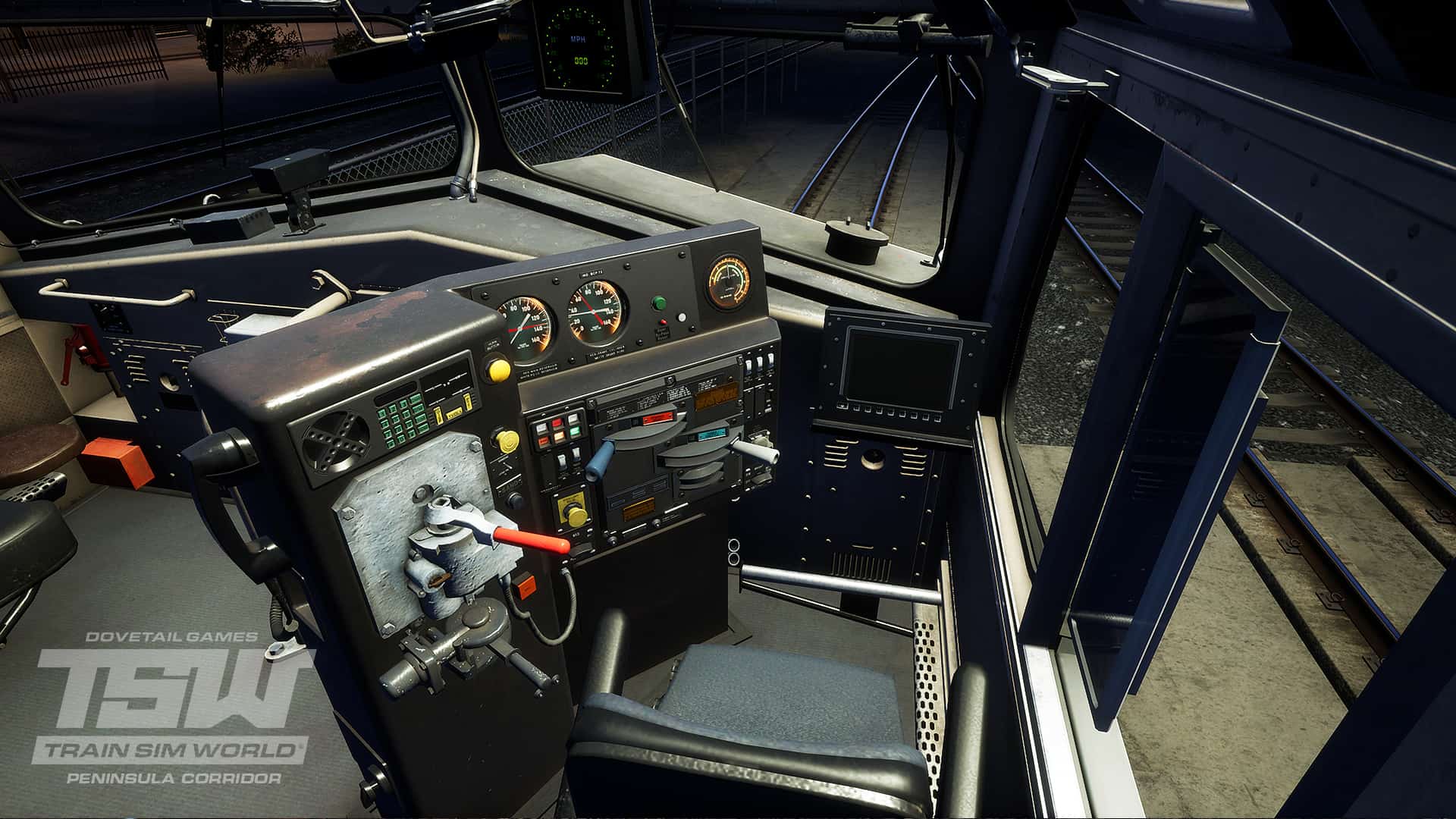 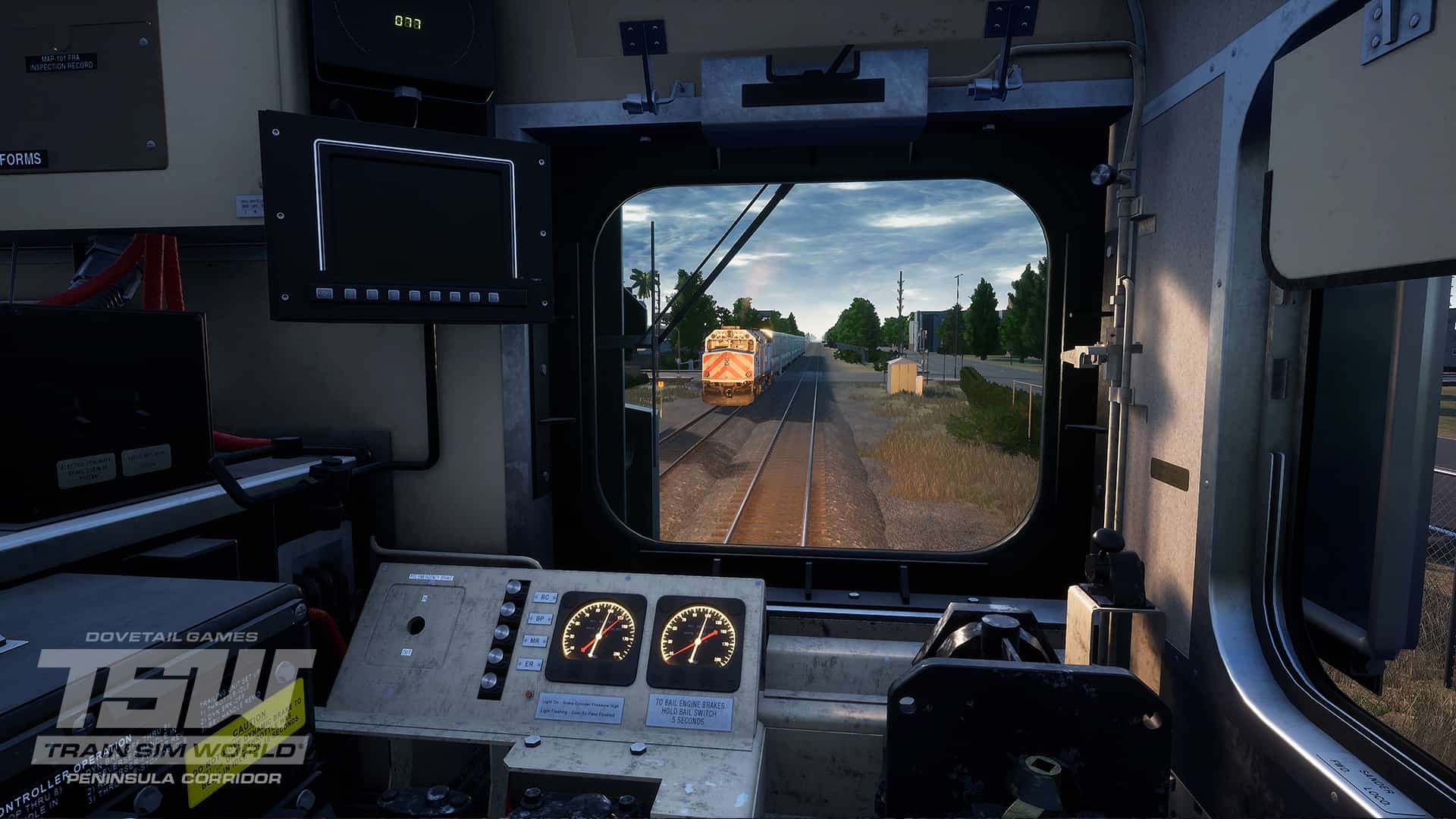 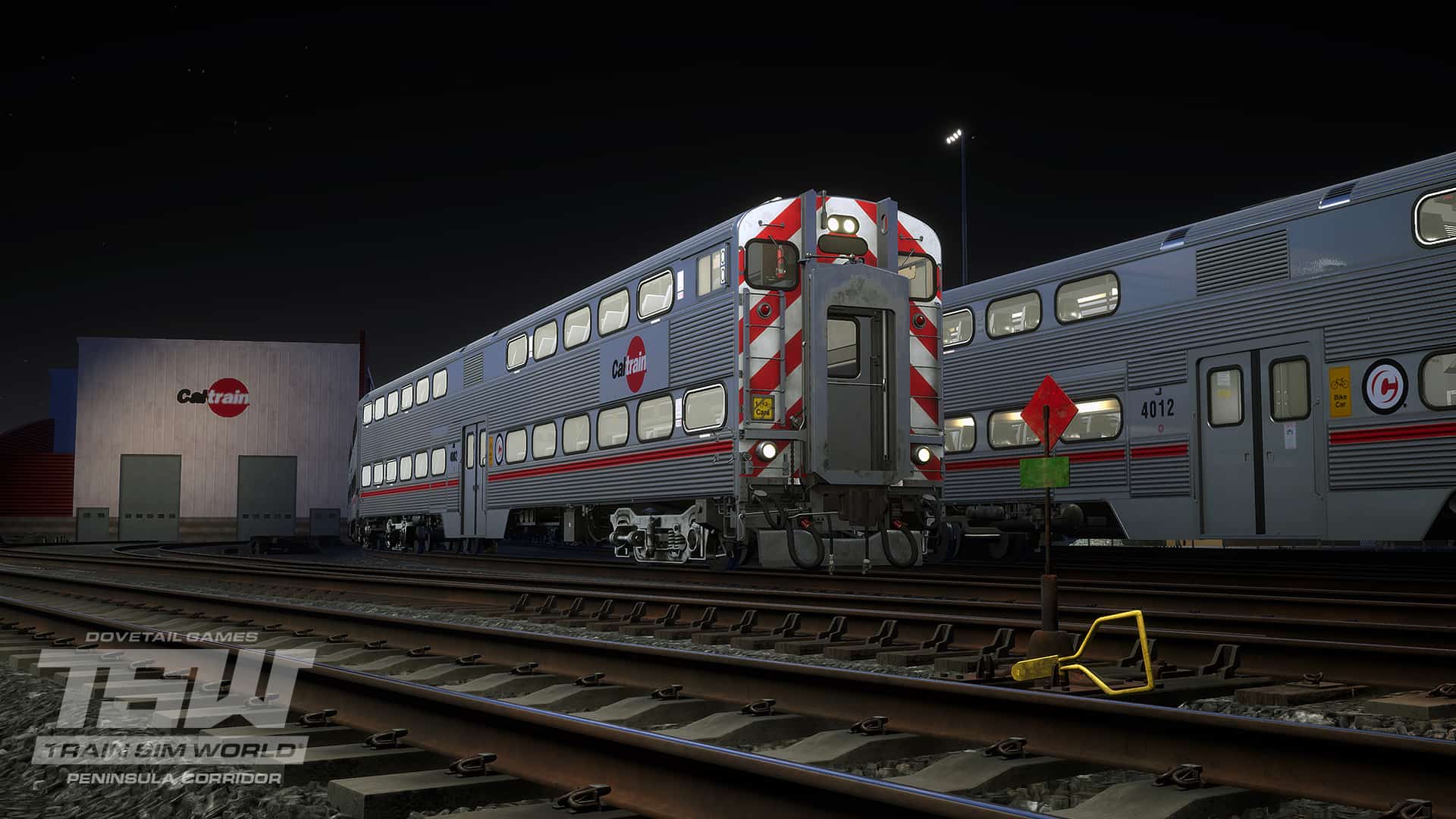 To maintain its locomotive and car fleet, in 2007 Caltrain opened its modern, 20-acre Centralized Equipment Maintenance & Operations Facility (CEMOF) in San Jose. The sprawling shops complex (above and below) is re-created in the upcoming TSW: Peninsula Corridor Route, adding operational variety to the route as you shuttle equipment to and from the facility for servicing. 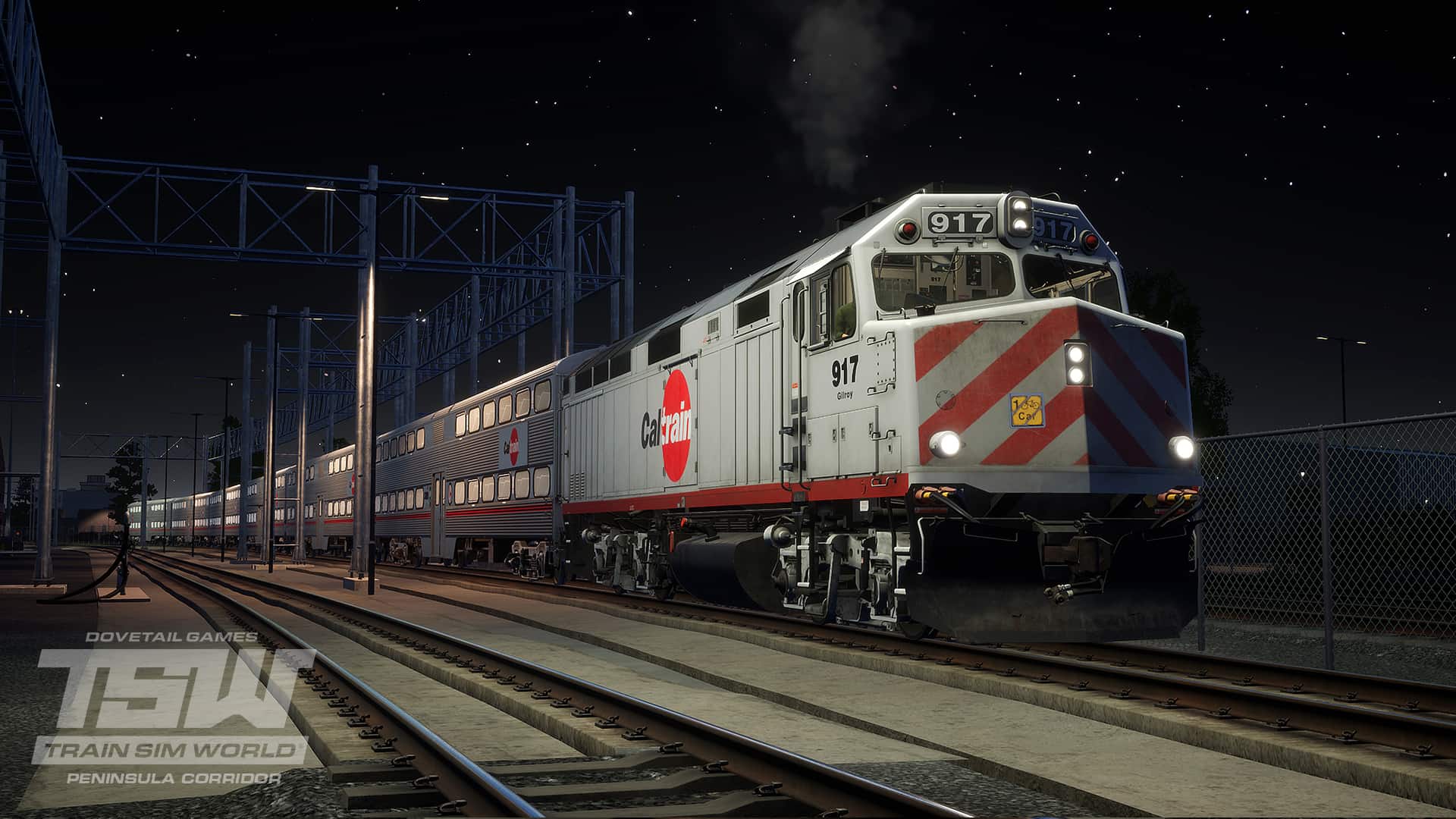 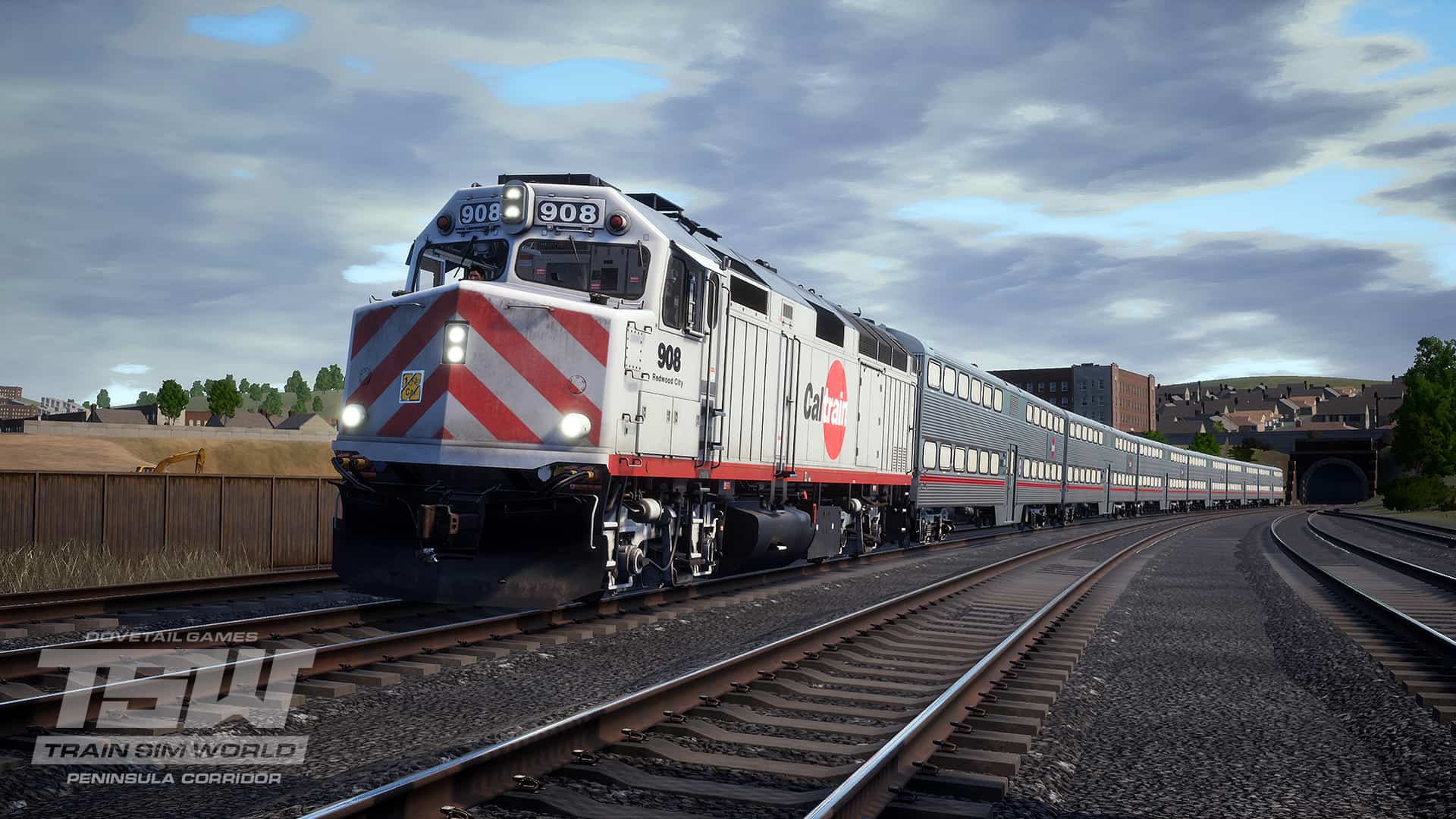 Caltrain commuter operations on the San Francisco-San Jose TSW: Peninsula Corridor Route promise to be busy, captivating, and challenging as you operate on the multi-track line at speeds up to 79 mph and call at more than intermediate 20 stations! Leading a southbound run, F40PH-2CAT 908 emerges from a tunnel near Bayshore (above) and later pulls alongside the classic station at Burlingame (below). 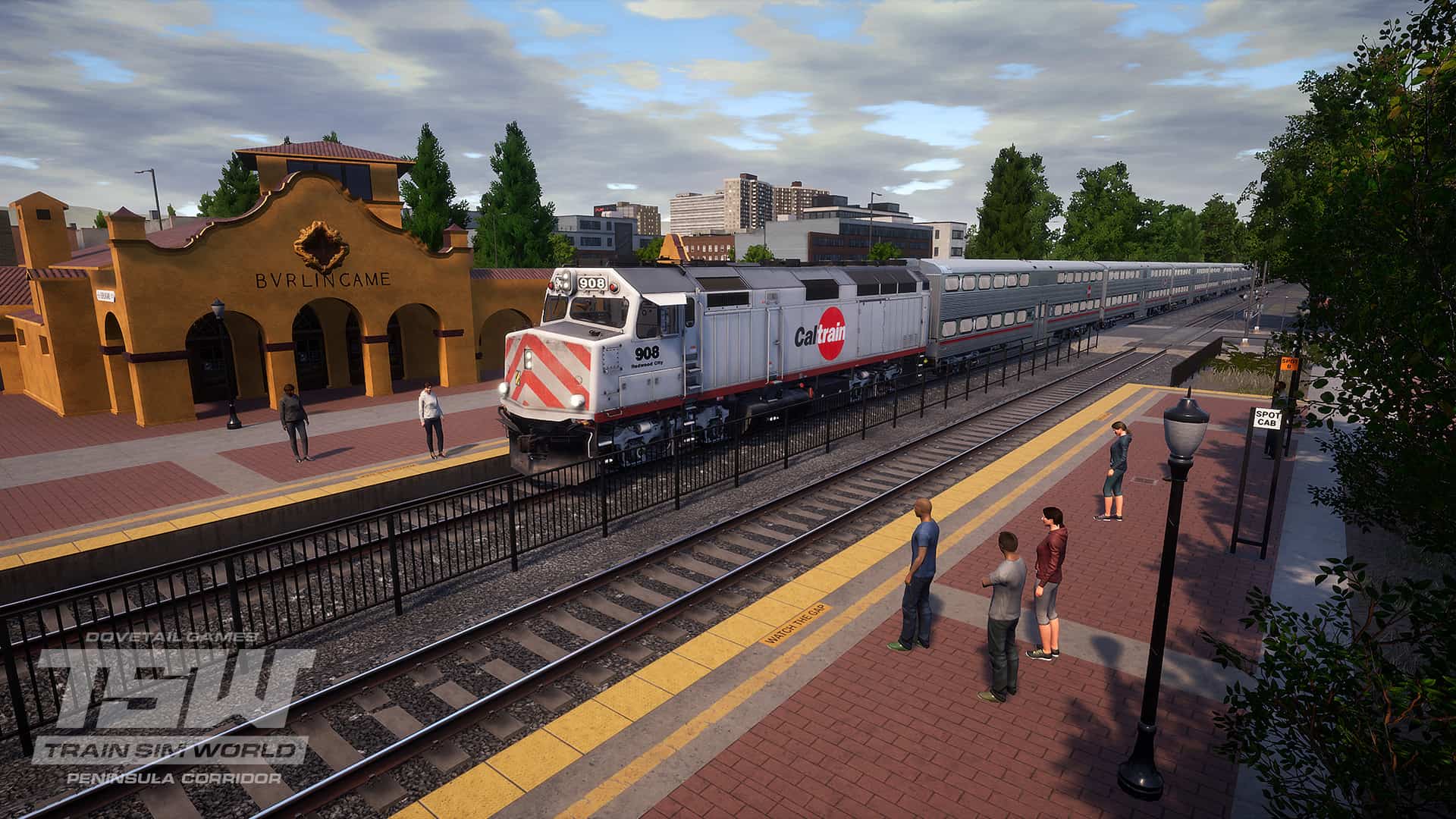 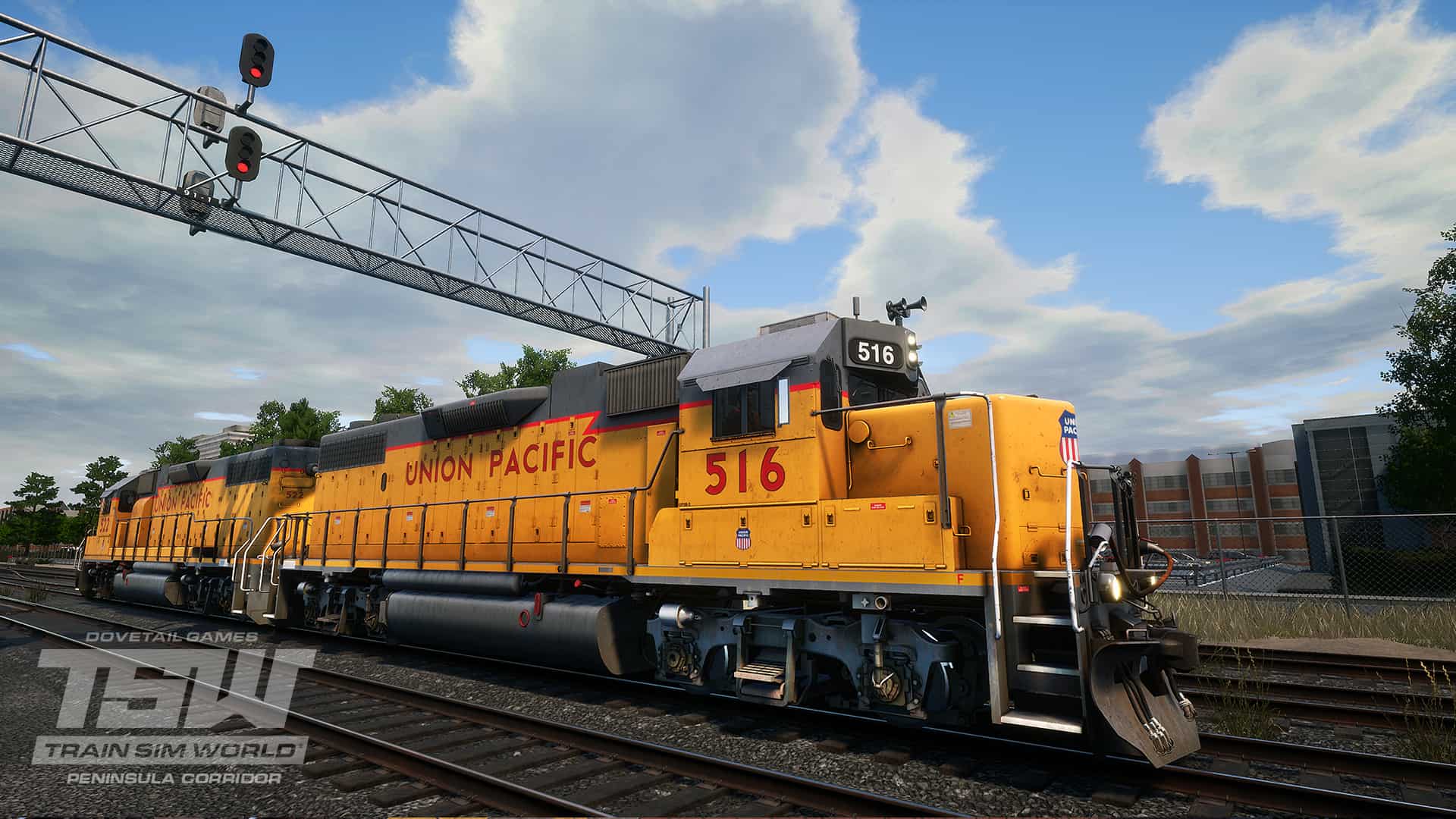 Union Pacific freight operations are an intriguing element of railroading on the Peninsula and the upcoming Peninsula Corridor Route will include UP’s versatile and venerable Electro-Motive GP38-2 diesel road-switcher (above). No, every day in California is not sunny, and amid a downpour (below) a trio of UP GP38-2s wait in the southern section of San Francisco for mainline clearance as a Caltrain commuter flashes past. 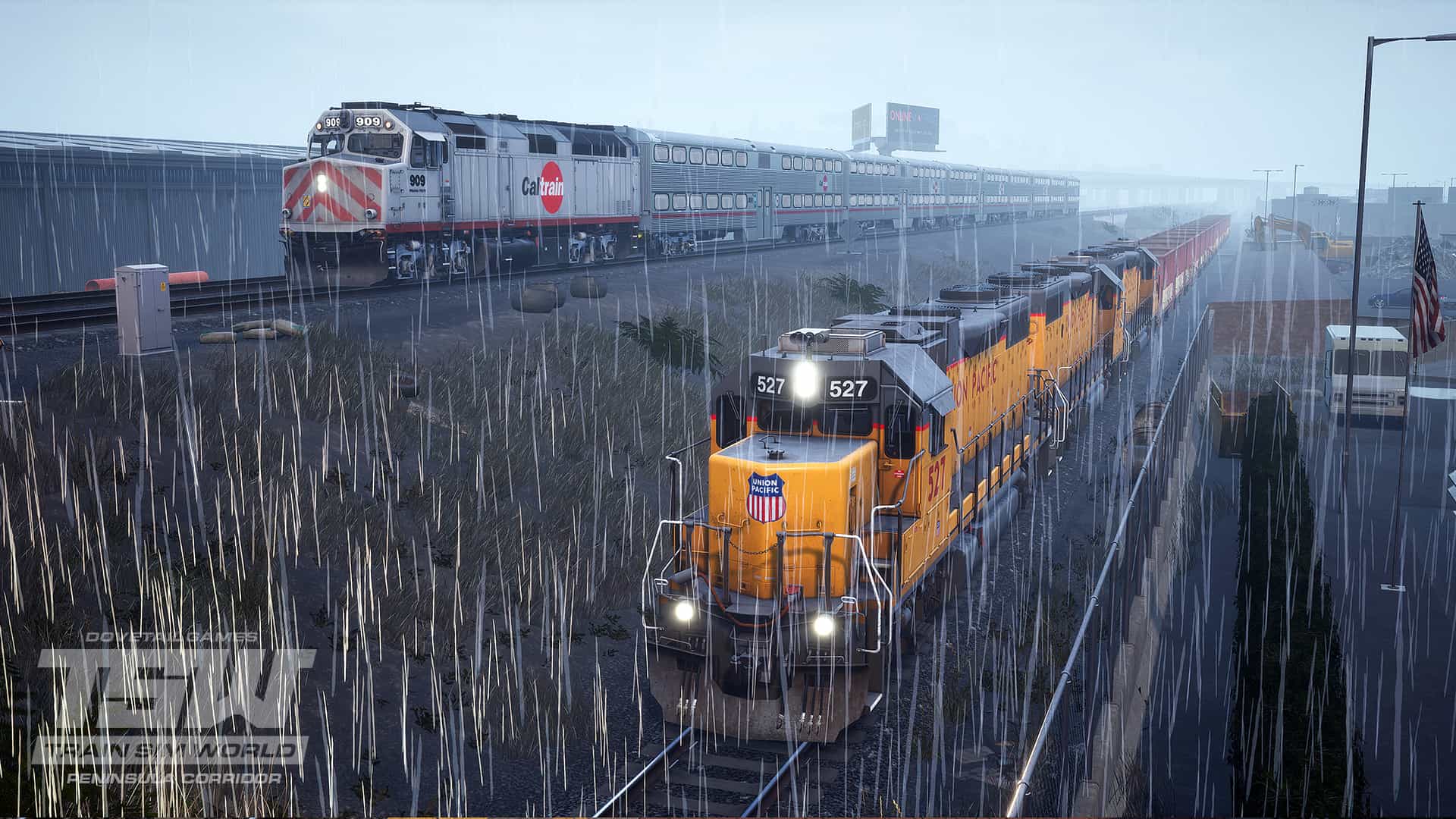 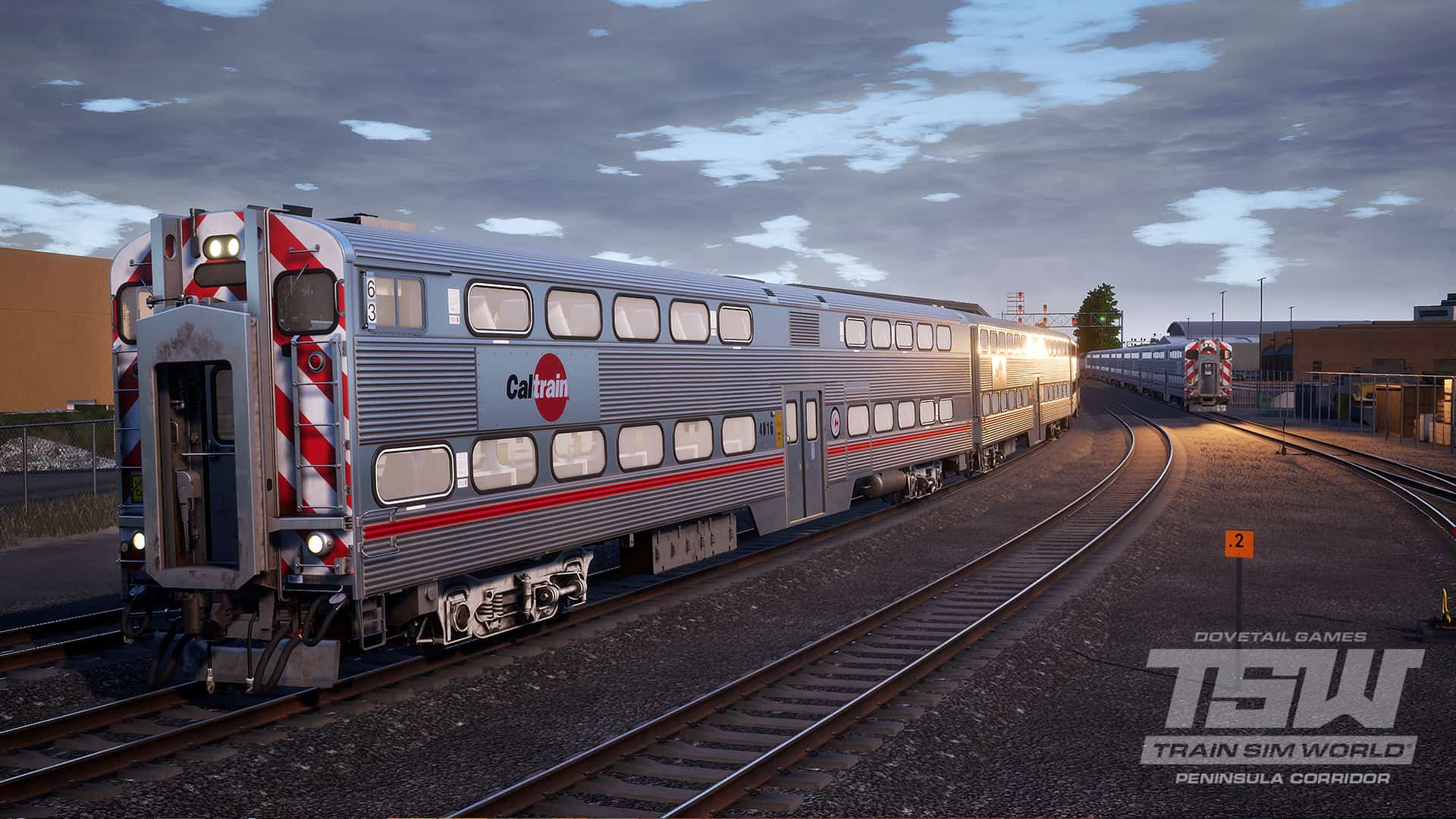 Screenshots and images displayed in this article may depict content that is still in development. The licensed brands may not have been approved by their respective owner and some artwork may still be pending approval. Screenshots taken on Windows PC.