All Aboard for Boston!

News
Xbox
Steam
PS4
Train Sim World 2: Rush Hour now brings challenging and fast-paced American passenger and commuter railroading to you – with the “Boston Sprinter” Boston-Providence route!
Written by Gary Dolzall
All aboard for Boston, Providence, and all points between with the new Train Sim World 2 Rush Hour Boston Sprinter route! With this new route, you’ll go to work on two of America’s most dynamic railroads to hustle Amtrak® intercity passengers and MBTA (Massachusetts Bay Transportation Authority) commuters along one of the country’s busiest and fastest rail lines!
With the new Boston – Providence route, you’ll climb aboard Amtrak’s state-of-the-art Siemens ACS-64 Amtrak Cities Sprinter and MBTA’s distinctive EMD F40PH-3C and MBB CTC-3 cab car to handle duties between classic Boston South Station and modern Providence station. And the route also includes MBTA’s historic Stoughton Branch.
What today serves as the fast-paced northern end of Amtrak’s Northeast Corridor was set down more than 180 years ago by the aptly named Boston & Providence Railroad, making the line one of the oldest in America. This route, completed in 1835, went on to achieve glamour and glory as part of the legendary New Haven Railroad’s “Shore Line” linking Boston, New Haven, and New York City. Boston’s magnificent South Station, a crown jewel among American railroad stations, was opened in 1899 under the auspices of the New Haven and New England’s other heavyweight railroad, the Boston & Albany (part of the New York Central System). At the turn of the twentieth century, South Station was proclaimed as the busiest railroad station in America and in the decades that followed, New Haven’s renowned Shore Line became home to the likes of NYNH&H’s elegant Merchant’s Limited.
The Boston-Providence route, having over the decades been joined by a virtual spiderweb of other New Haven lines south of Boston (which included the Canton-Stoughton branch opened in 1845), remained part of the New Haven until the railroad was merged into the ill-fated Penn Central on December 31, 1968. Within but a handful of turbulent years, intercity passenger service was then assumed by Amtrak in 1971 and Penn Central was folded into Conrail in 1976. Meanwhile, today’s expansive MBTA (nicknamed “The T” by Bostonians) was created as a state agency in 1964 and has come to be one of America’s largest and most progressive regional transit systems incorporating rail, light rail, and bus services. MBTA’s rail services include operations on a dozen commuter lines once operated by the New Haven, B&A (NYC), and Boston & Maine. Today, the state of Massachusetts also owns the 38 Northeast Corridor route-miles between Boston and the Massachusetts/Rhode Island border.
Unlike the New Haven-Washington section of today’s Northeast Corridor, the New Haven’s Shore Line was traditionally not electrified. Modern electrification planning for the route dated to the Northeast Corridor Improvement Project of 1976, but political wrangling and lack of funding stalled the initiative until the 1990s and the Northeast High Speed Rail Improvement Program, which finally brought electrification, track improvements – and the high-speed Acela® – to fruition. Electrification of the 157 miles between Boston and New Haven was begun in 1996 and completed in 2000. Speed limits on select portions of the line in Rhode Island and Massachusetts were raised to 150 mph for Acela (and 125 mph for regional trains).
Today, the Boston-Providence route is pulsing with Amtrak intercity and MBTA commuter trains and is a captivating mix of the modern (such as Boston South Station’s adjoining multi-mode Transportation Center and Amtrak’s Route 128 station) and the timeless (including Boston South Station’s beautiful headhouse facing Atlantic Avenue and the famed stone-arched Canton Viaduct). The new Train Sim World 2: Rush Hour edition brings the vitality of this extraordinary rail line to full, entertaining, and challenging life. All the grand locations of the route – Boston’s South and Back Bay stations, Cove interlocking, Amtrak’s sprawling and modern Southampton Street Maintenance Facility, Forest Hills, Readville, Canton Junction and Viaduct, Mansfield, East Junction, Providence station, and more – are meticulously re-created. And you’ll take the throttle of authentically modeled Amtrak ACS-64 and MBTA EMD F40PH-3C and CTC-3 cab cars ready to speed passengers to and from the four Amtrak stations and twelve stations served by MBTA on the route!
All aboard for challenging and dynamic American passenger and commuter railroading with Train Sim World 2’s Boston Sprinter route, available now on Xbox One, Xbox Series X|S, PlayStation 4, PlayStation 5, Epic Games Store and Steam! Links below to pick up the Season Ticket on all stores:
Steam Store | PlayStation (Europe) | PlayStation (US) | Xbox | Epic Games Store 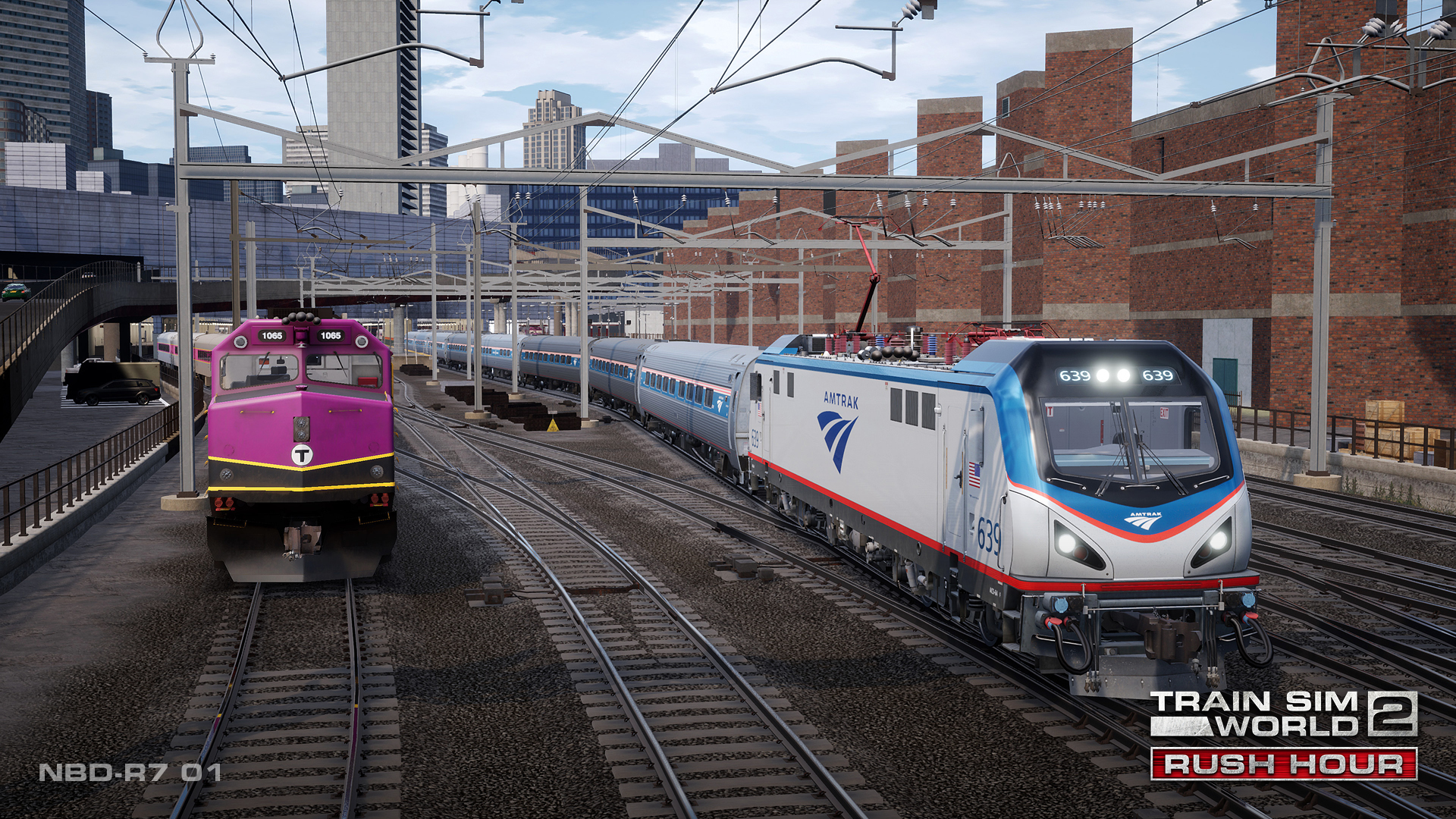 All aboard for Boston, Providence, and all points between with the new Train Sim World 2 Rush Hour Boston Sprinter route! With this new route, you’ll go to work on two of America’s most dynamic railroads to hustle Amtrak® intercity passengers and MBTA (Massachusetts Bay Transportation Authority) commuters along one of the country’s busiest and fastest rail lines! With Boston’s skyline as a backdrop, an Amtrak Northeast RegionalSM Train departs Boston South Station as an MBTA consist awaits it next call. 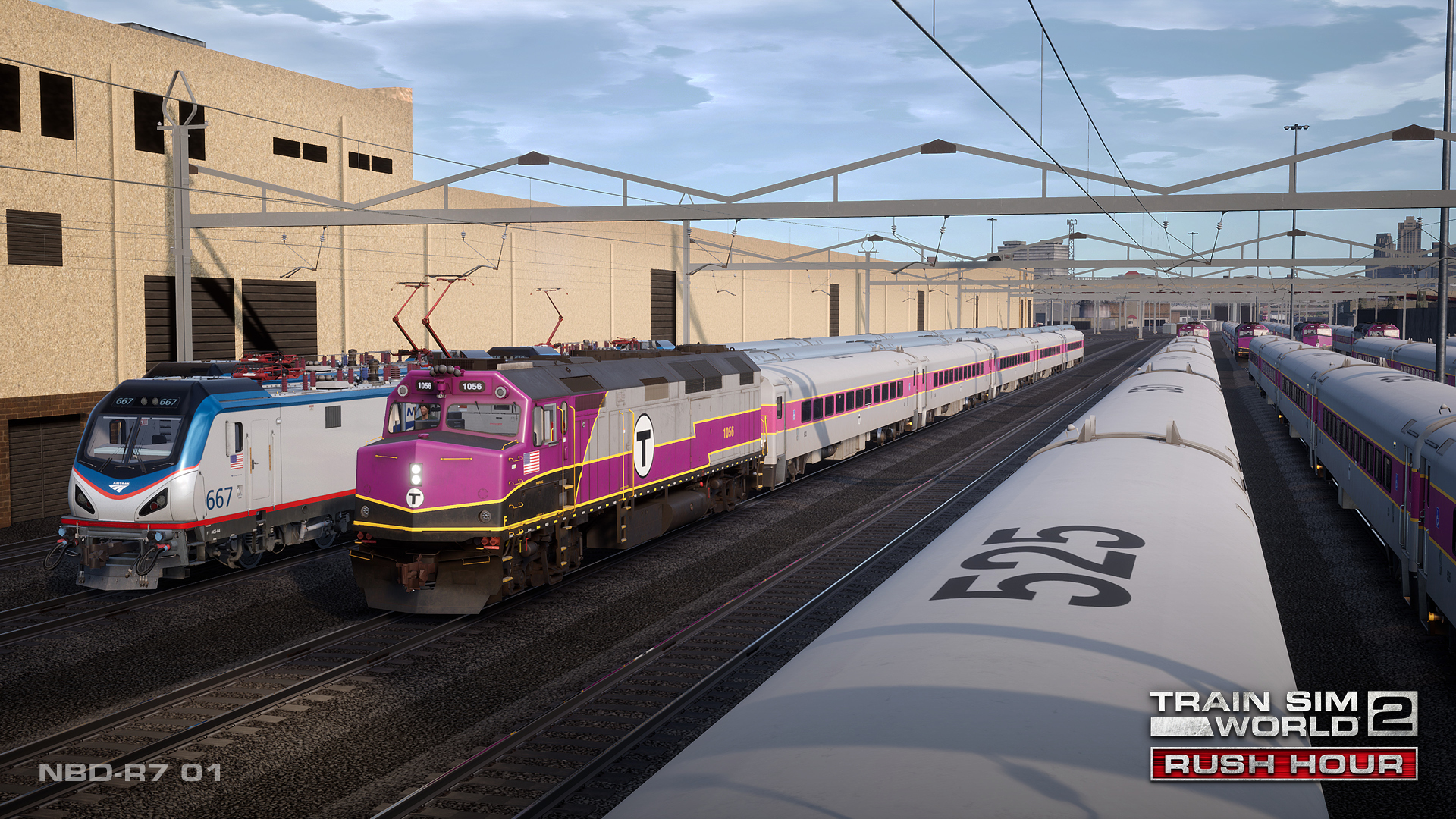 Located near Boston’s South Station and Cove Interlocking is Amtrak’s modern Southampton Street Maintenance Facility (above), which maintains Amtrak® equipment and also serves as a staging yard for MBTA south-side operations. Day or night (below), Southampton Street is a vital operating point on the Boston-Providence line. Note: Screenshots may depict content while in development. 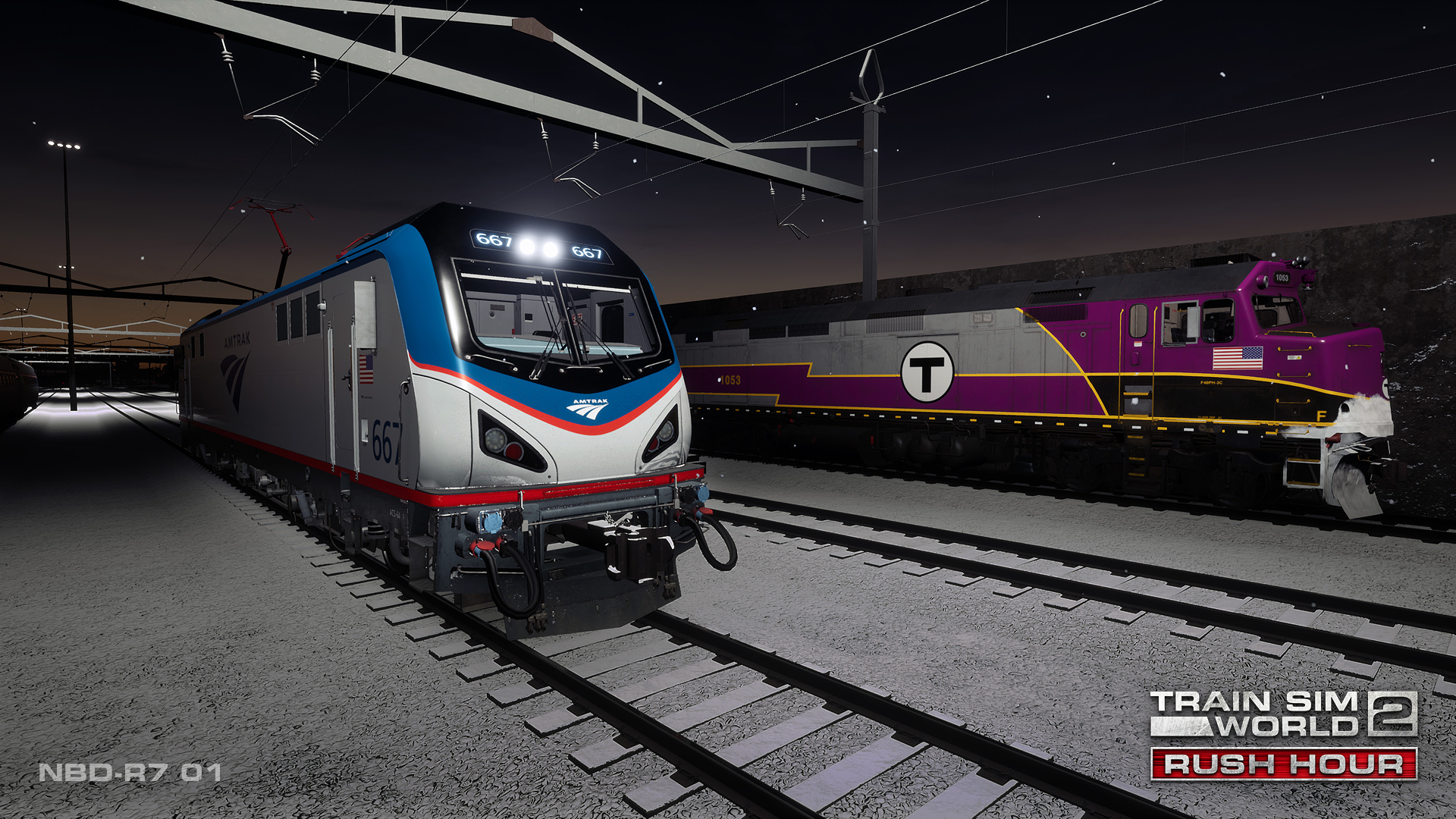 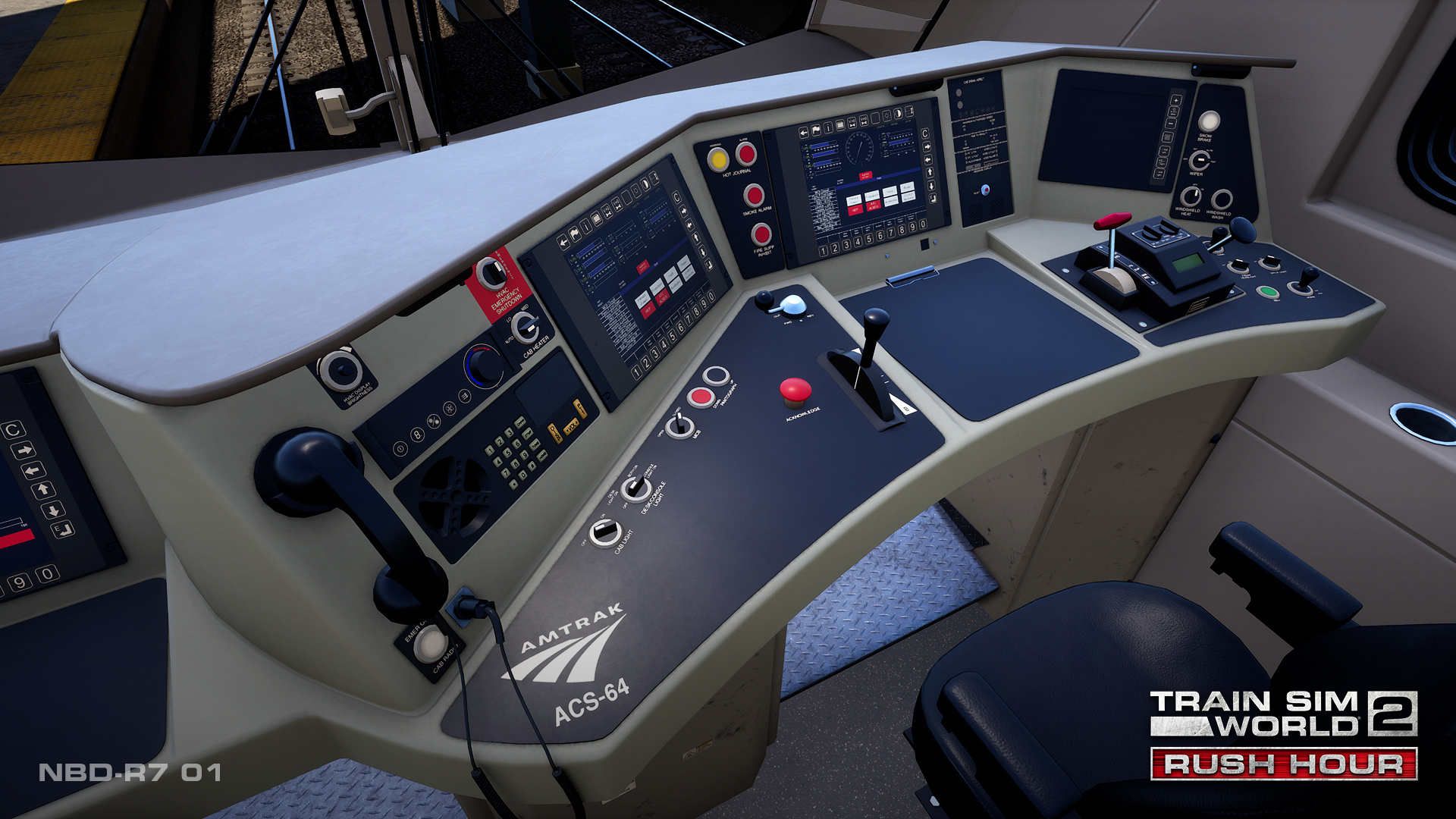 With the now available Train Sim World 2: Rush Hour Boston-Providence route you’ll work from the modern console-style controls of Amtrak’s ACS-64 electric (above) and the traditional engineer’s control stand of the MBTA F40PH-3C (below), as well as the distinctive controls of MBTA’s MBB CTC-3 cab car. 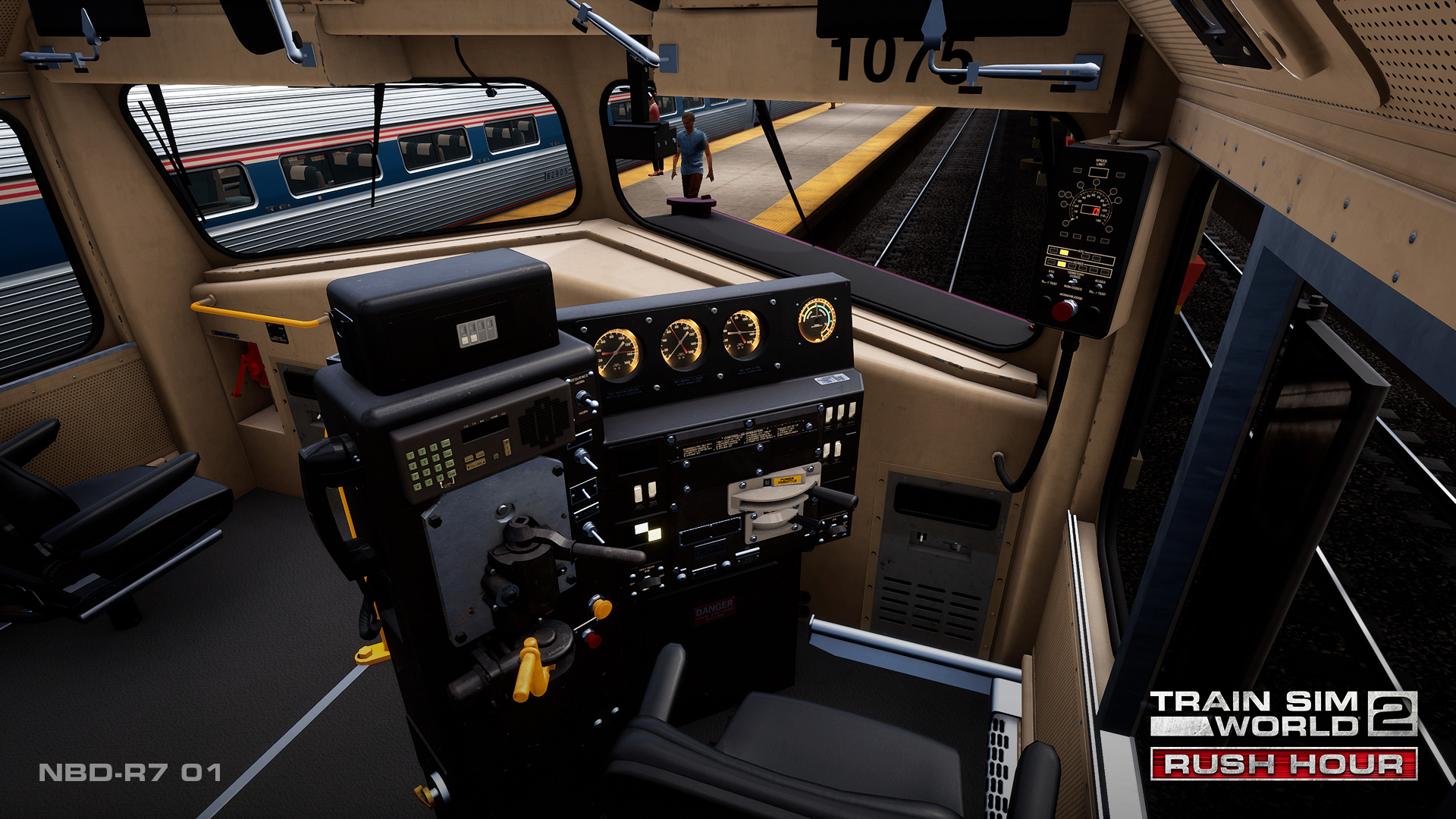 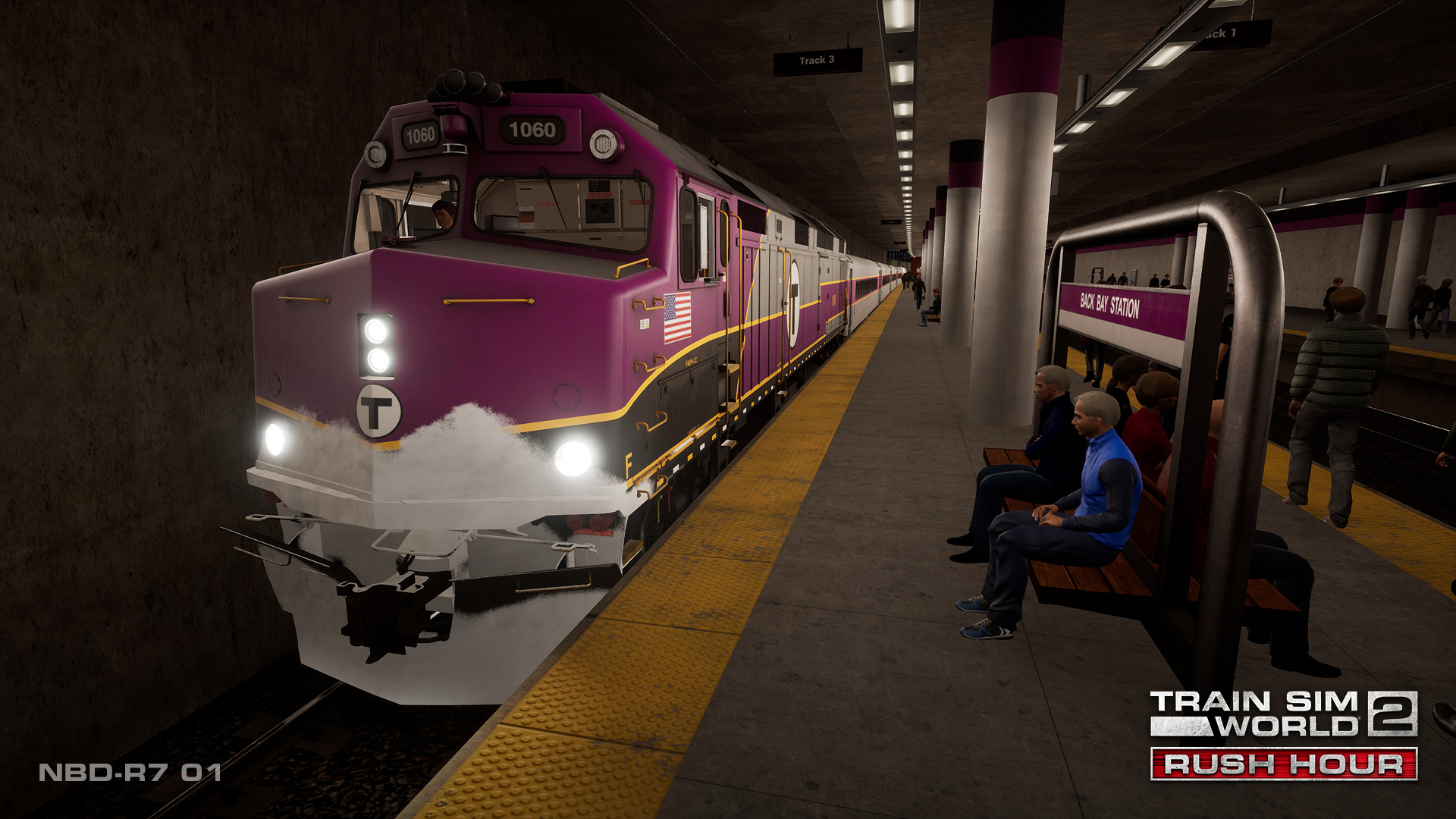 Powering an outbound MBTA commuter train, EMD/MPI F40PH-3C 1060 makes its stop at Boston Back Bay Station (above), then continues its wintry journey (below). The F40PH-3C included with the Train Sim World 2 Boston-Providence route wears the commuter carrier’s latest stunning livery with large “T” logo. Among Bostonians, MBTA is most often referred to as “The T.” 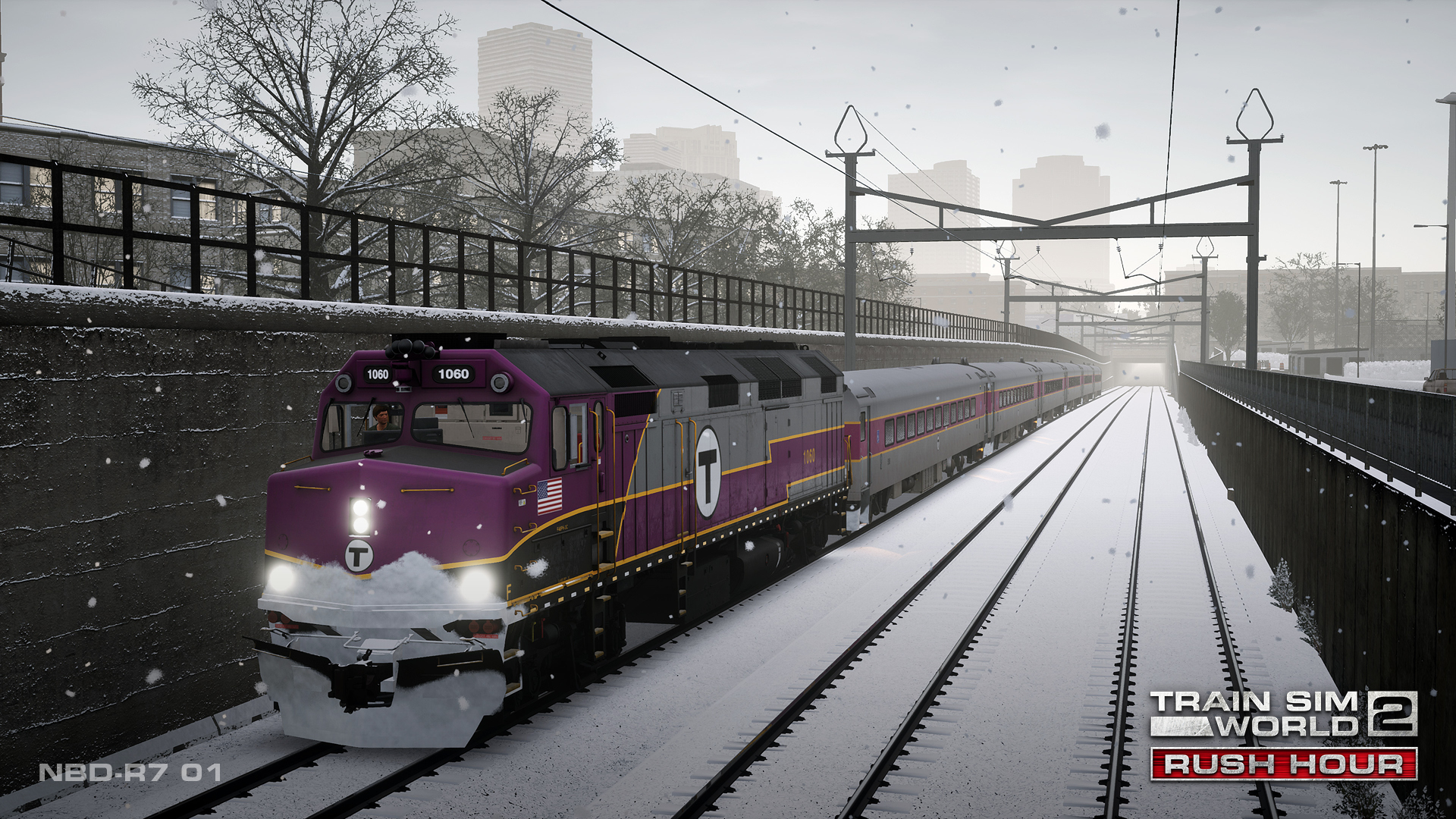 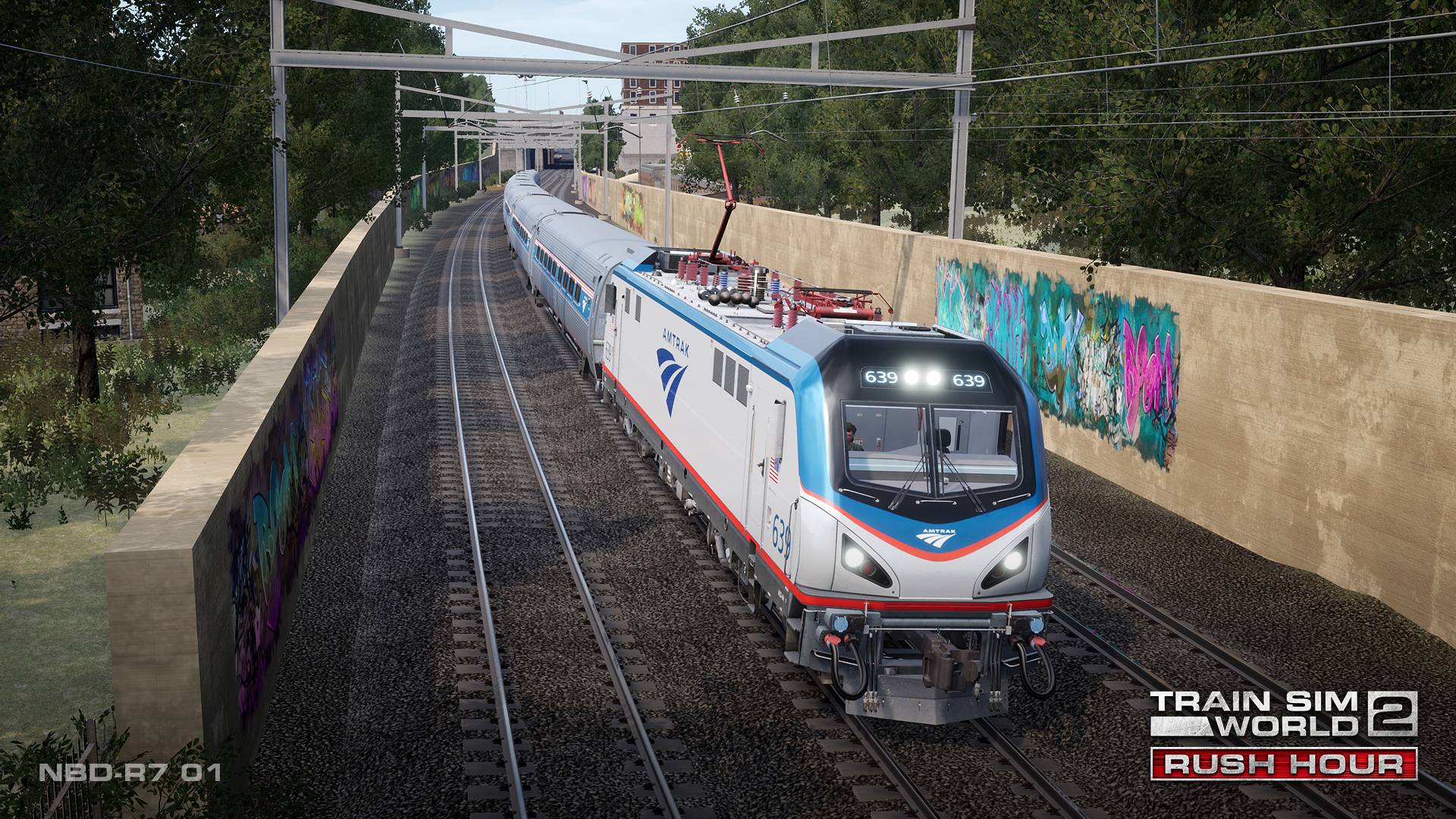 Amtrak® ACS-64 639 is dashing through the urban sprawl south of Boston and in a number of minutes will be making a scheduled stop at Route 128 Station. Amtrak ACS-64s and Amfleet®-equipped trains operate at speeds up to 125 mph on the Boston-Providence route. 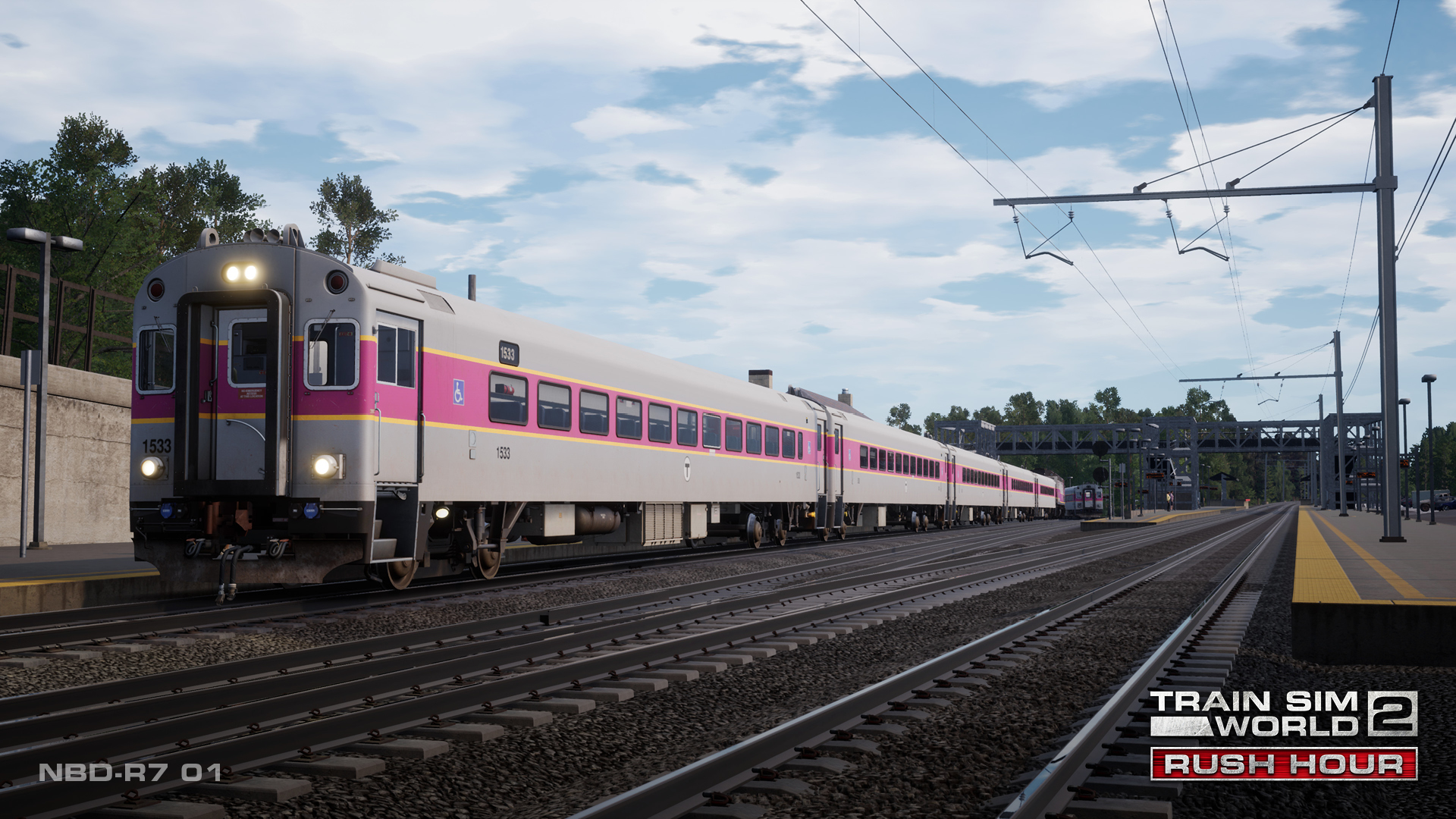 Canton Junction, the location at which the Boston-Providence Northeast Corridor main line connects with MBTA’s Stoughton branch is busy as MBTA MBB CTC-3 cab car 1533 leads a Boston-bound train off the Stoughton line (above). At the other end of the four-mile branch, MBTA F40PH-3C 1065 is arriving at the classic Stoughton depot (below). 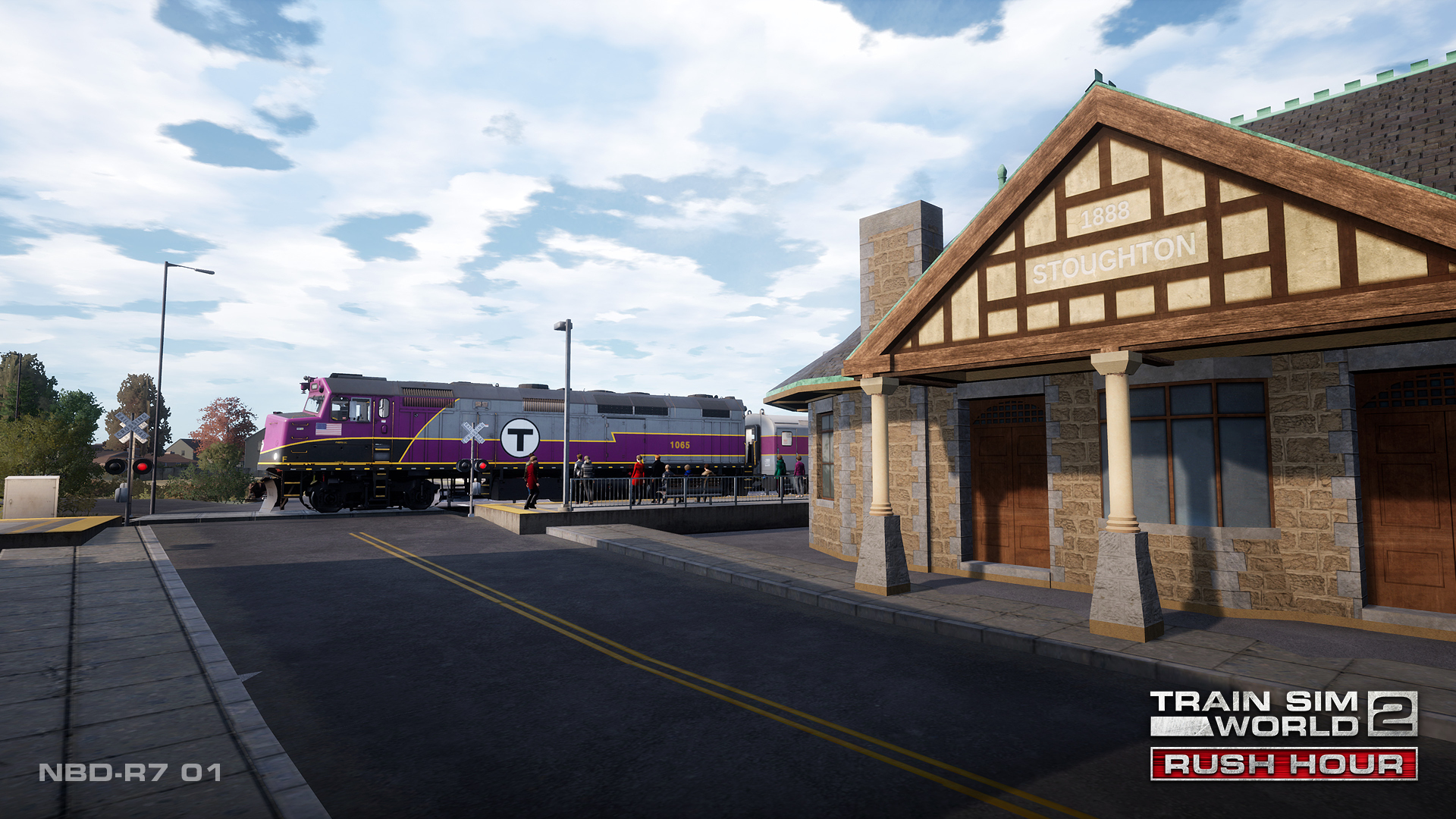 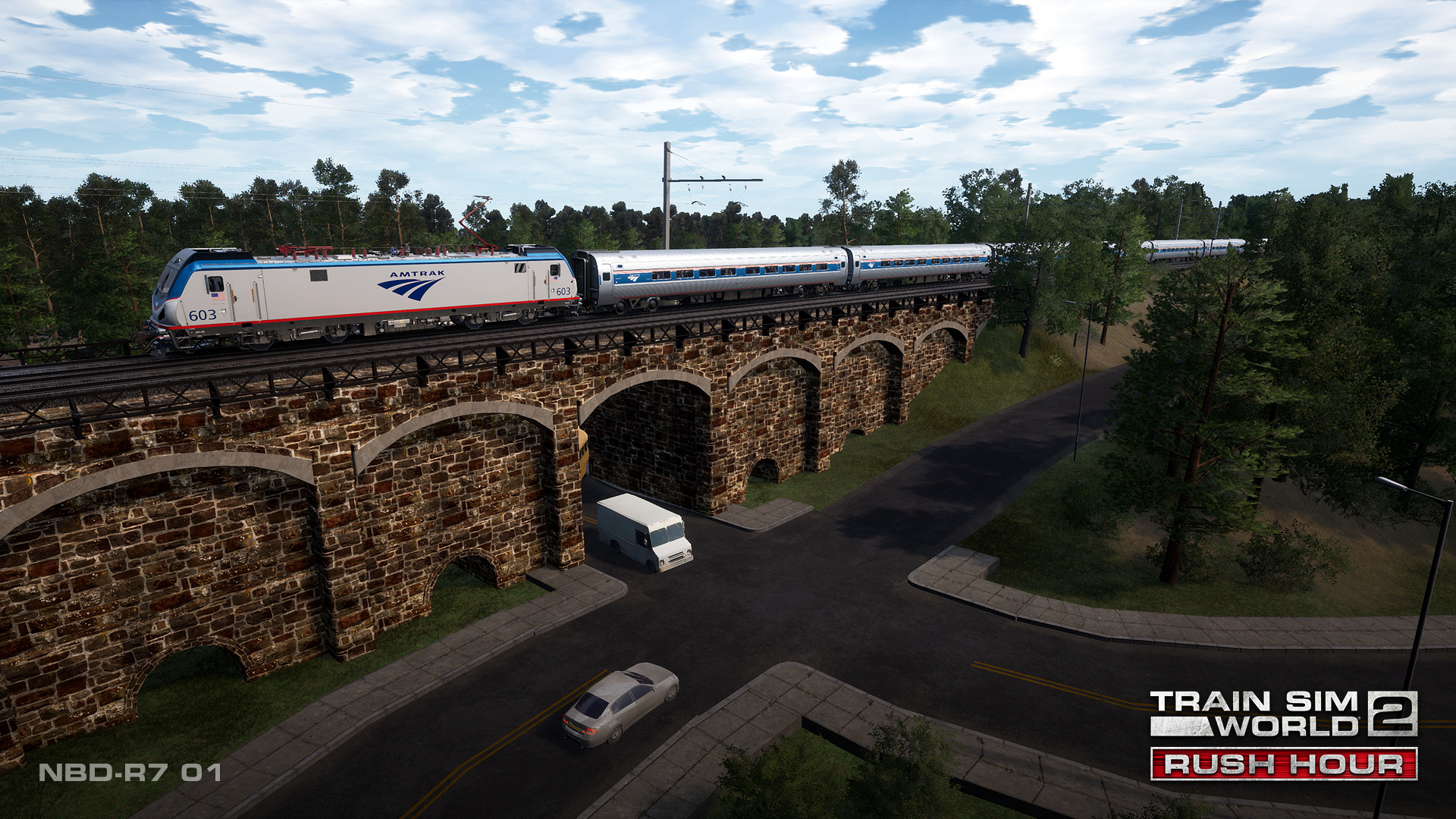 On a line that is both classic in its origins and a showcase of modern railroading, few locations are more historic or famous than Canton Viaduct. An Amtrak® Boston-bound Northeast RegionalSM train glides across the viaduct which was constructed in 1834-35. 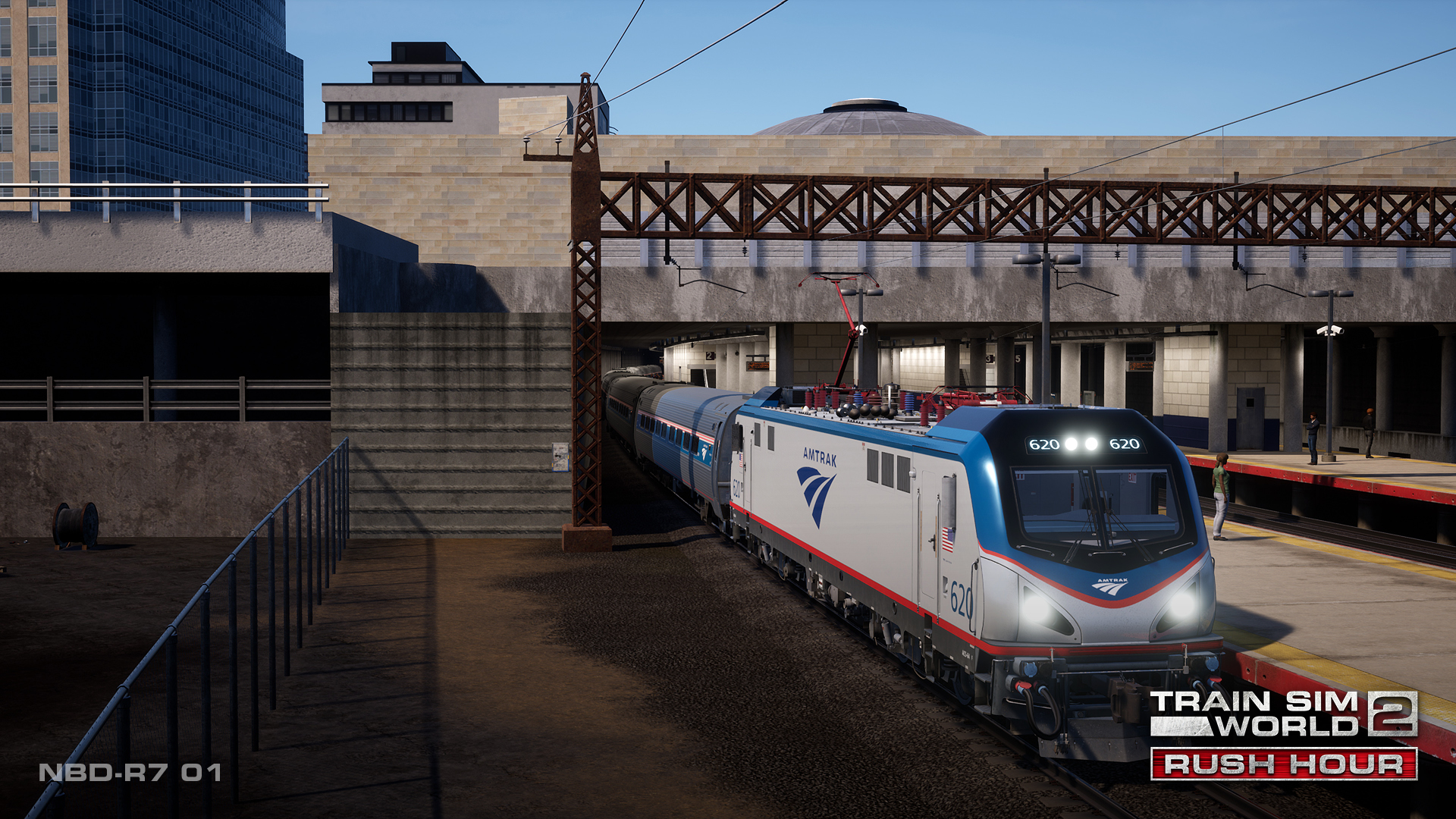 Amtrak® ACS-64 620 and its Boston-bound, Amfleet®-equipped train makes its departure from Providence’s modern station (above), and a short time later, an MBTA commuter train departs with CTC-3 cab car 1517 leading the way and Rhode Island’s grand state capital building standing in the background (below). 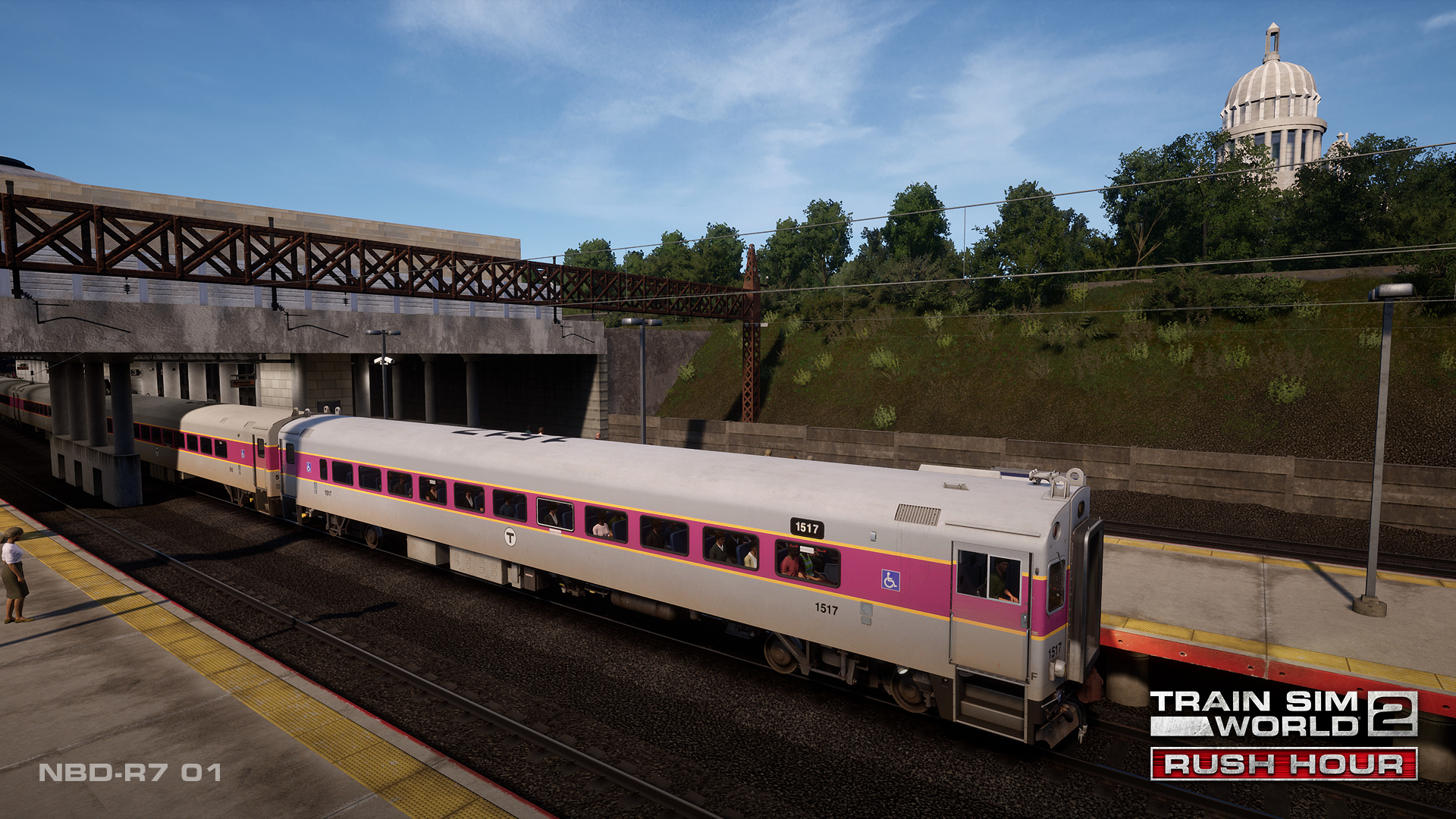 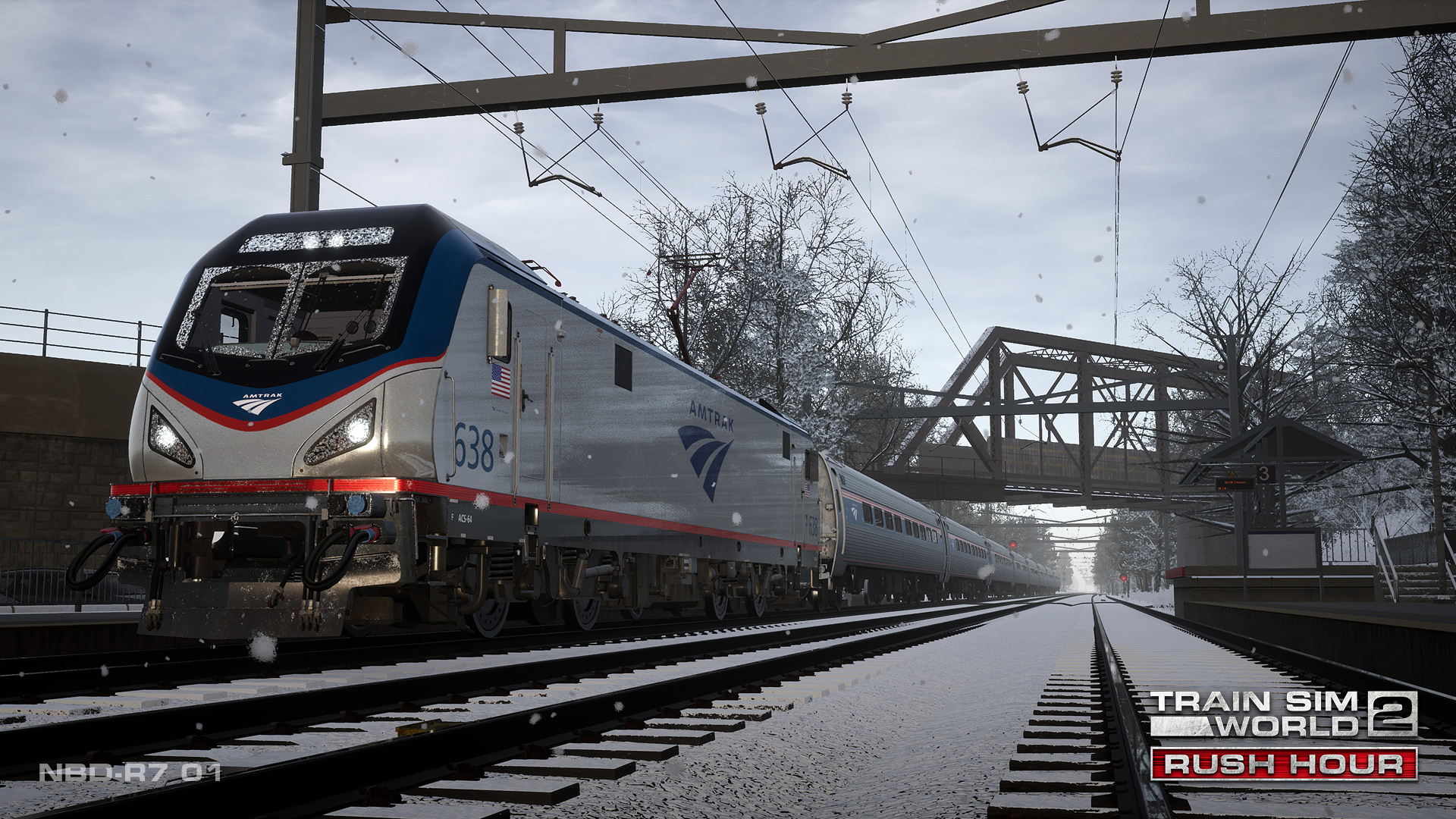 On a snowy morn, Amtrak® ACS-64 638 races through Readville.All aboard for challenging and dynamic American passenger and commuter railroading with Train Sim World 2’s Boston Sprinter route. Available now on Xbox One and Steam, and releasing soon PlayStation 4 and Epic Games Store. Get the Rush Hour Season Ticket to get this and the Nahverkehr Dresden / London Commuter routes at a discounted price. Want to find out more about Rush Hour? Head to trainsimworld.com for more information and to read the detailed FAQ
Screenshots by Gary Dolzall.
Join JD and Matt on Railfan TV tonight as they celebrate the launch. Watch live on Twitch or YouTube at 19:00 UTC 19th August.